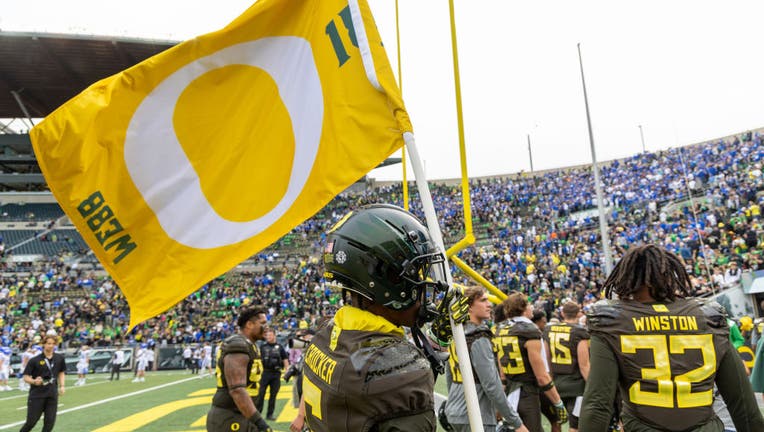 EUGENE, OR - SEPTEMBER 17: Wide receiver Isaah Crocker #6 of the Oregon Ducks carries a flag for team mate Spencer Webb #18 after their game against the Brigham Young Cougars at Autzen Stadium on September 17, 2022 in Eugene, Oregon. (Photo by Tom Ha

Utah Gov. Spencer Cox slammed Oregon fans who were chanting "f--- the Mormons" at a game between the Ducks and BYU on Saturday afternoon.

Cox quote-tweeted a video that showed Oregon students loudly chanting the phrase at the game.

The virality of the video prompted the Oregon Pit Crew to issue an apology to BYU on Twitter. Brigham Young University is a private school in Provo, Utah, and is sponsored by The Church of Jesus Christ of Latter-day Saints.

"To all @BYUfootball fans in attendance at todays game we would like to apologize for the actions of the students in attendance. We do not condone or support any hateful speech directed towards one’s religion and are ashamed of those who participated," their tweet read.

The University of Oregon also apologized.

"The university apologizes for the despicable chants made by some University of Oregon fans at today’s football game with Brigham Young University," a statement from the University of Oregon’s interim vice president for the Division of Student Life read. "There is no place for hate, bias or bigotry at the University of Oregon. These actions are simply unacceptable. We will investigate, and we call on our students and campus community to refuse to accept or tolerate this type of behavior."

The incident came weeks after a Duke women’s volleyball player accused a BYU fan of hurling racial slurs at her during a match.

BYU said following an "extensive" investigation that there has been no evidence to corroborate an allegation made by a Duke women’s volleyball player that she was subjected to racial slurs during a game at BYU last month.