WESTMINSTER, Calif. - A use of force investigation is underway after two Westminster police officers stopped a fellow officer who punched a handcuffed woman during a recent arrest.

The incident, which was captured on cell phone video, happened Wednesday around 4:45 p.m. in the 14000 block of Locust Street in Westminster. Officers were dispatched to the area for a call of an assault with battery.

The 911 caller reported that a female Hispanic adult assaulted an Asian woman who had tried to rescue a dog running in the street, according to police.

The woman detailed in the video was identified as Ciomara Garcia, 34, of Westminster. During their investigation, officers learned that Garcia had an outstanding felony bench warrant for vandalism and detained her. Police said that she appeared to be exhibiting signs of being under the influence.

Officers summoned paramedics and as they waited for the paramedics to arrive, police said Garcia became non-compliant and combative with the officers.

The video shows the woman handcuffed between two officers sitting on the curb. As one officer begins to stand, so does the woman and it appears as though the woman steps up on the curb with her back foot before an officer pushed her down to the ground. Garcia then appears to kick the officer in the groin, and he is then seen punching her twice before the two other officers intervene and restrain him. 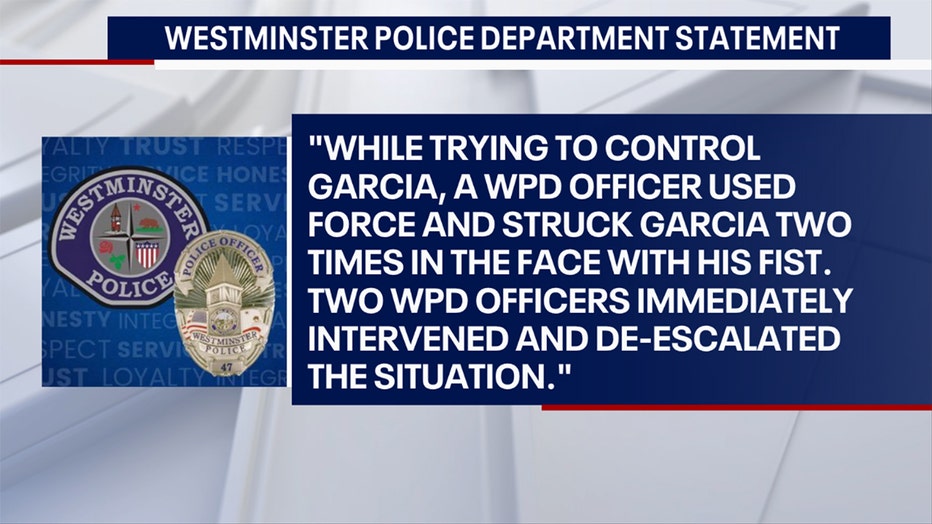 The witness who took the video, however, told FOX 11 that Garcia walking her dog when a woman on a bicycle was approaching. As the woman on her bicycle got closer, Garcia told the bicyclist to move because she was fearful that the biker would run over her dog.

The witness said the bicyclist "took it the wrong way" and was upset.

The bicyclist left but then returned five minutes later with police officers. The witness alleged that the bicyclist told officers that Garcia hit her.

Garcia was transported to the hospital by ambulance for evaluation following the incident.

The witness told FOX 11 that Garcia never hit the bicyclist.

Garcia was booked into the Orange County Jail on her outstanding warrant.

The Westminster Police Department said that the officer was immediately placed on administrative leave pending an internal affairs investigation.

The department is also in communication with the Orange County District Attorney's office which will evaluate the officer's use of force and determine if criminal charges are warranted.