GARLAND, Texas - Police officers in Garland pulled a man from a burning car just in time.

Body camera video captured the rescue after the fiery crash at 3 a.m. Wednesday on Forest Lane in front of the Garland Police Department. 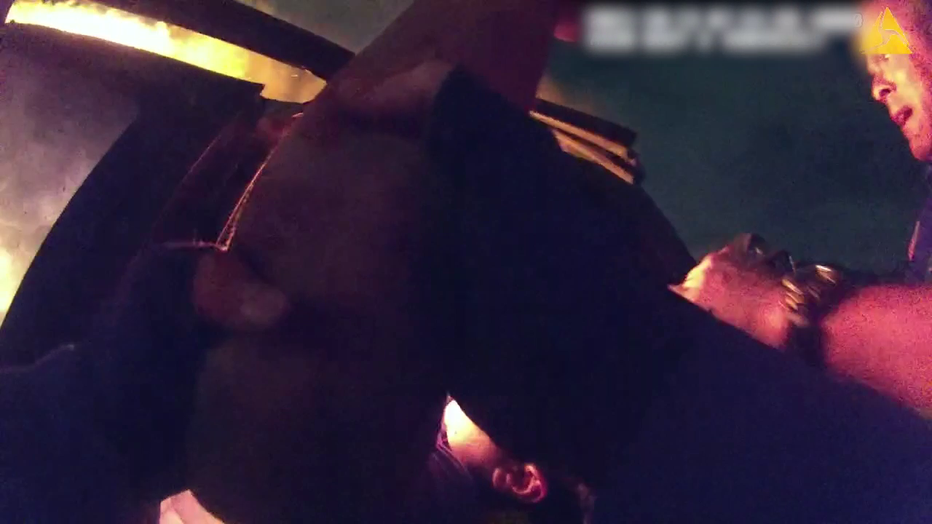 Police said the car was speeding and flipped as it hit a curb and the passenger was ejected. The car then caught on fire.

Officer Matthew Fuhs and his rookie partner were the first on the scene. They pulled the unconscious driver out of the vehicle with just seconds to spare before it became fully engulfed.

"There's only a certain amount of control that can take place, and this was uncontrolled. And so, we approached the guy and my first thought was, 'I've got to try to get him awake.' He was unconscious. He wouldn't come to, and luckily my partner was there, and we both grabbed ahold of him and at some point, within mere seconds, we were able to get our hands on both of his arms before the fire approached his feet and started to burn him," Officer Fuhs said.

Garland police officers pulled a man from a burning car. The rescue was captured on their body cameras.

Fuhs has been on the force for five years. But his partner is a rookie. It was his first day in the field.

He said his partner was calm, cool and collected.

"It’s part of the job when you sign up for this. It’s a moment of instinct," Fuhs said. "I knew going into this that this wasn’t a normal wreck. It was a fire and things could get ugly. But that’s my job, what we’re called to do and that’s my job, so."

Both the driver and the passenger were taken to the hospital in serious condition.

Police said they are both expected to survive.

Dallas gives an update on firefighters hurt in apartment explosion