TEMPLE TERRACE, Fla. - Police in Temple Terrace say an officer was forced to open fire on a woman who began swinging a “large knife” toward the officer at city hall Friday afternoon.

The Temple Terrace Police Department says an officer was called to speak with the woman, who came to city hall just after 1 p.m.

According to Temple Terrace Police Chief Kenneth Albano, the officer met the woman just outside the doors of city hall. He spoke to the woman and then walked away for a brief moment.

Albano said the woman did not seem to be in any distress, up to this point.

Surveillance video from the building shows the officer walk back to the woman, who is sitting on a bench facing the doors of city hall.

As he approaches, she quickly stands, pulls out what police say was "a large butcher knife," and started swinging it toward the officer.

The officer retreats and the two move out of the camera's view.

Albano said he could hear the officer yelling for the woman to "drop the knife" from his office on the third floor.

By the time the chief got downstairs and out of the front doors, the woman was on the ground.

"We want it to be clear that this was an unprovoked, very unfortunate situation, but that the officer really had no other choice, when the knife wasn't dropped and the assault continued, but to defend themselves," Albano said.

The video shows another officer running toward the scene from the back of the parking lot, appearing to draw his weapon. At the end of the video, an officer can be seen with his weapon drawn. 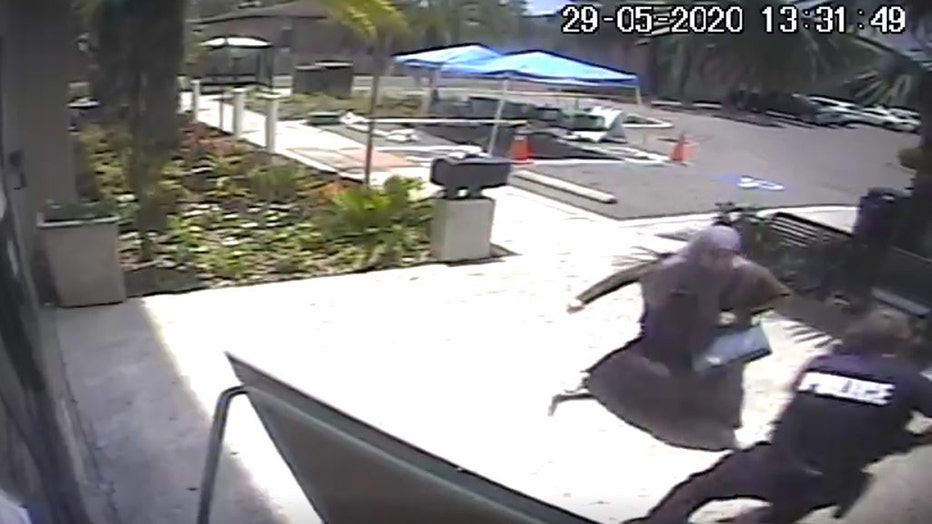 The woman was shot during the incident. It is unclear which officer discharged their firearm.

The woman later died at the hospital. She was identified as Heba Momtaz Alazhari.

During a press conference Friday, Albano said a woman named Ayah Montaz Alazhari was involved in the incident, but then said they were still investigating. An unidentified person at the press conference told the chief "she had nothing to do with that."

The officer involved was not placed on administrative leave. The Florida Department of Law Enforcement is investigating.