(FOX 9) - Despite concerns over the coronavirus, Wisconsin polls opened Tuesday morning for the spring election and presidential primary.

Polling locations are open until 8 a.m. All absentee ballots must be returned or postmarked by Election Day and received by April 13 to be counted.

Wisconsin voters head to the primary during COVID-19 pandemic

Wisconsin voters were still able to cast their ballots in the primary despite COVID-19 concerns. Voters and volunteers maintained social distancing and took measures to keep spaces clean.

Election officials have made some modifications to in-person voting to ensure everyone is safe, although it varies from polling place to polling place.

Polling locations have hand sanitizer available, and voters are allowed to wear a face mask and are asked to bring their own black or blue ballpoint pen. Some polling locations are offering curbside voting.

At a fire hall in Hudson, one of the two polling locations in the city that is open for voting Tuesday, traffic cones are being used to keep voters six feet apart while they are waiting in line in the parking lot. Voters are going into the polling place one at a time to vote. 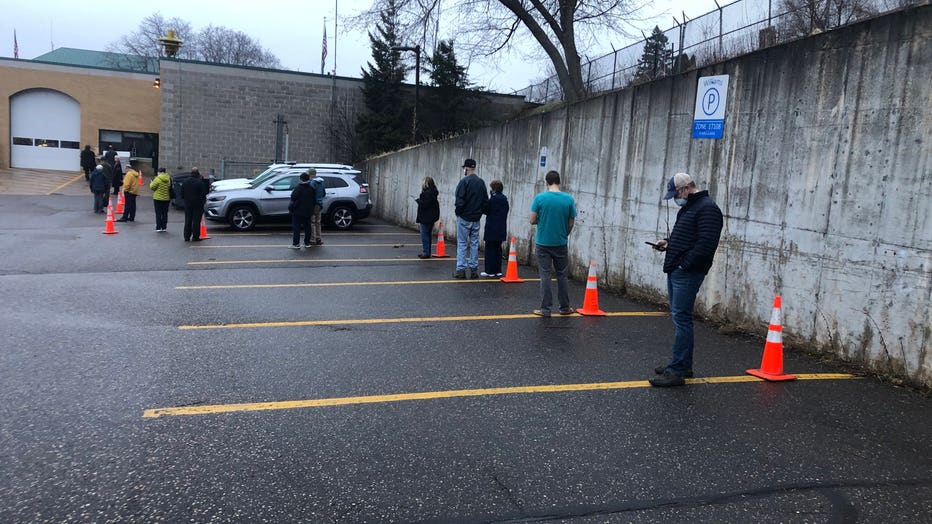 The line to vote at the fire hall in Hudson, Wisconsin. Only one person is allowed inside at a time and people waiting in line are required to stand 6 feet apart.

It is a slower process, but election officials are asking voters to be patient and hope that does not deter them from showing up.

Election officials are also getting what they say is indispensable help from the National Guard, which is helping run voting sites across the state after thousands of poll workers quit, fearing for their safety amid the pandemic.

Dozens of polling locations are closed as a result of the shortage of election workers, so voters are being asked to check their polling location before they head to the polls as it may have changed. You can find you polling place here.

As recently as Monday, there were questions about whether the state would vote on Tuesday as planned. Gov. Tony Evers issued an executive order on Monday delaying the primary until June.

"I cannot in good conscience allow any types of gathering that would further the spread of this disease and to put more lives at risk," Evers said in a press conference.

Immediately after Evers issued the executive order, state Republicans challenged and the Wisconsin Supreme Court overturned the order. The U.S. Supreme Court then ruled absentee voting could not be extended and those ballots must be postmarked Tuesday.

Results are not expected to be released on election night, as a court ruling appeared to prevent results from being made public earlier than April 13.