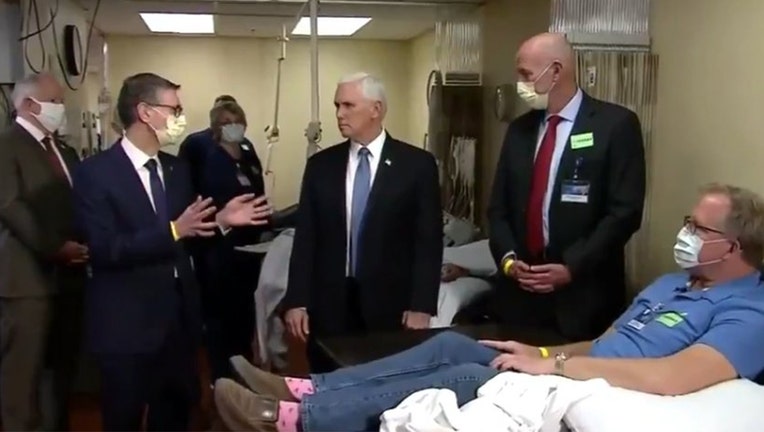 Vice President Mike Pence did not wear a mask during his visit to Mayo Clinic.

ROCHESTER, Minn. (FOX 9) - Vice President Mike Pence ignored a Mayo Clinic policy designed to slow the spread of coronavirus and did not wear a mask during his tour of Mayo's research and treatment facilities Tuesday.

Pence's visit, his second to Minnesota in two months, highlighted Minnesota's goal of testing 20,000 people per day. The state has partnered with the University of Minnesota and Mayo Clinic to dramatically ramp up testing over the next several weeks.

But people quickly focused on the vice president's face. Video showed nine other people -- including Gov. Tim Walz and U.S. Rep. Jim Hagedorn -- wearing a mask while standing around Pence, but the vice president went without one.

Pence told reporters that he's tested regularly and so is "everyone who's around me." He did not say the last time he got a coronavirus test, or whether those who spoke with him during Tuesday's visit had all been tested.

"Since I don’t have the coronavirus, I thought I’d be a good opportunity for me to be here, to speak to these researchers, these incredible health care personnel, to look them in the eye, and say thank you," Pence said. He did not say how a mask would've prevented him from doing so.

Starting on April 13, Mayo began requiring all patients and visitors to wear a face covering on campus, and said it would provide masks for visitors who don't bring one.

"Mayo Clinic had informed @VP of the masking policy prior to his arrival today," Mayo Clinic tweeted while Pence was still touring its facilities.

In response to follow-up questions from FOX 9 -- including why it had deleted the tweet and staffers had offered Pence a mask -- Mayo replied with a 10-word statement.

"Mayo shared the masking policy with the VP's office," the statement read.

"When Vice President Pence ignores the safety policy and refuses to wear a mask, he insults the hard work and sacrifice of all health care workers. Worse, he puts them, their patients, and their families at risk," said Jamie Gulley, president of SEIU Healthcare Minnesota. "We are deeply disappointed that Mayo failed to enforce their own policy."

Pence repeatedly praised Walz during a roundtable discussion, continuing a positive relationship between the Republican administration and the Democratic governor. President Donald Trump tweeted last week that he and Walz had a "very nice call" about antivirus efforts.

Last week, Walz announced a "moonshot" partnership between the Mayo Clinic and the University of Minnesota to boost the state’s capacity to 20,000 tests per day within three to four weeks. Everyone with symptoms is now eligible for a test, and 127 testing sites have been set up around the state.

If fulfilled, it would make Minnesota one of the most aggressive states for testing.

"It’s not going to be necessary for us to test every American every day, but we believe we’ve got the infrastructure now to continue to scale the infrastructure to provide the kind of testing that we can safely and responsibly reopen America," Pence said.

But Minnesota's moonshot has yet to fully land. While testing capacity has increased, Minnesota has never done 3,000 tests per day. Tuesday, the state reported 2,561 completed tests over a 24-hour period.

Health Commissioner Jan Malcolm said the state is expecting 5,000 tests per day by next Monday.

On a call with the Minnesota congressional delegation Tuesday morning, Democratic U.S. Rep. Dean Phillips said Walz was "incredulous" that the state cannot get swabs and vials from the federal government needed for testing.

Pro-Trump activists have been protesting outside the Governor's Residence to criticize Walz's stay-home order. The governor has said he'll decide this week whether to extend it beyond Monday, when it's currently scheduled to expire.

The issues did not surface during Tuesday's roundtable discussion.

Mayo Clinic said Friday that it predicts $3 billion in lost revenue for 2020 because elective surgeries, procedures and office visits have been delayed amid the pandemic.

As a result, the system has furloughed workers, reduced benefits and frozen hiring. It has also cut pay by 7 to 20 percent for executives, physicians and senior staff.

Tuesday’s visit comes more than a month since the vice president’s last trip to Minnesota, when he stopped by 3M to talk about ramping up production of N95 masks.

Vice President Mike Pence toured the 3M Innovation Center on Thursday, thanking company executives for increasing production of face masks as he outlined plans to prepare the U.S. for more cases of the coronavirus.