NASA successfully launched Landsat 9, a satellite designed to track changes on our planet to inform on key areas such as climate change, on Monday, Sept. 27. (Credit: NASA via Storyful)

According to the agency, the planet, named TOI-674 b, is a bit bigger than Neptune and orbits a red-dwarf star about 150 light-years away — which is considered nearby in astronomical terms.

TOI-674 b is considered an exoplanet, or a planet around other stars, known to have water vapor in their atmospheres.

The water vapor was discovered by an international team of scientists, led by Jonathan Brande of the University of Kansas, and included researchers from the NASA Ames Research Center and from IPAC and other research centers at Caltech. The discovery has been submitted to an academic journal. 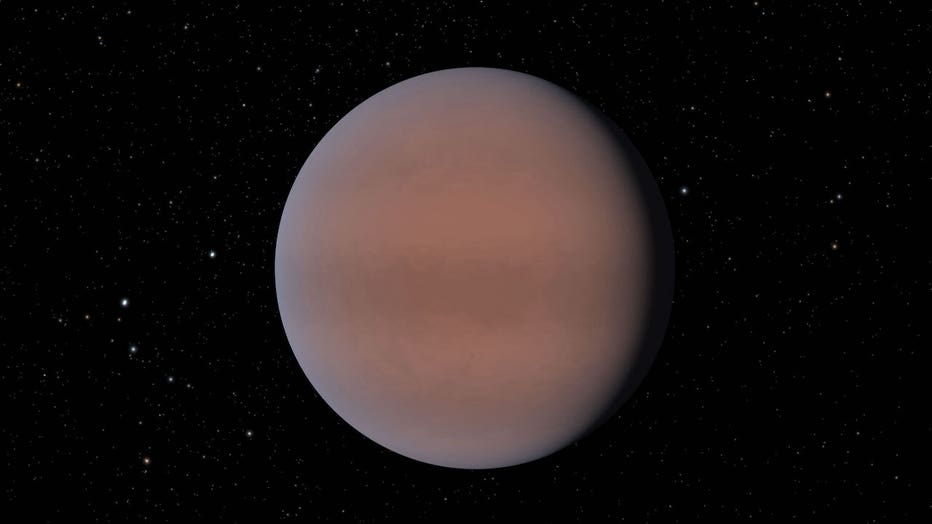 Illustration of a "super Neptune," TOI-674 b, with an atmosphere that, according to a recent study, includes water vapor. Image credit: NASA/JPL-Caltech

The discovery grew from a partnership between the Hubble Space Telescope and TESS, NASA’s Transiting Exoplanet Survey Satellite, launched in 2018. The planet was first found by TESS, then its light spectrum was measured by Hubble.

Data from the now-retired Spitzer Space Telescope also helped astronomers tease out some of the planet’s atmospheric components.

Many questions remain, such as how much water vapor its atmosphere holds, but researchers say the planet’s atmosphere is far easier to observe than those of many exoplanets, making it a prime target for deeper investigation.

"The planet’s distance, size and relationship to its star make it especially accessible to spaceborne telescopes," NASA wrote in a press release. "As the comparatively large planet – in a size-class known as "super Neptune" – crosses the face of its smallish star, starlight shining through its atmosphere can be more easily analyzed by our telescopes."

NASA said only three other Neptune-sized exoplanets have had aspects of their atmospheres revealed so far, though the advent of telescopes like Webb promises a golden age in the study of exoplanet atmospheres.

A study showed the planet was in a "habitable zone" around its star, a sign that "it’s possible for the planet to host liquid water at habitable conditions beneath its hydrogen-rich atmosphere," according to a statement from the University of Cambridge.

Researchers were quick to caution, however, that because it's located in the habitable zone does not necessarily mean life exists.

"Water vapor has been detected in the atmospheres of a number of exoplanets but, even if the planet is in the habitable zone, that doesn’t necessarily mean there are habitable conditions on the surface," the study’s lead author Nikku Madhusudhan added in the statement. "To establish the prospects for habitability, it is important to obtain a unified understanding of the interior and atmospheric conditions on the planet — in particular, whether liquid water can exist beneath the atmosphere."

The study was published in The Astrophysical Journal Letters.

More than 4,000 exoplanets have been discovered by NASA in total, approximately 50 of which were believed to be potentially habitable as of September 2018. This means, they have the right size and the right orbit of their star to support surface water and, at least theoretically, to support life.