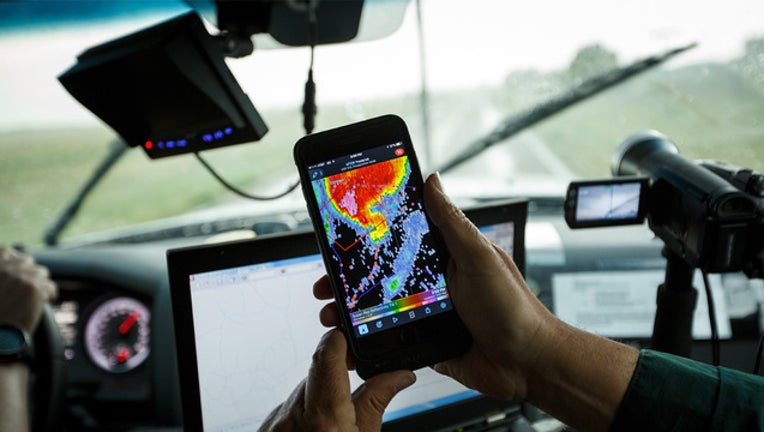 Support scientist Tim Marshall, a 40 year veteran of storm chasing, looks at radar on his smartphone as the group tracks a supercell thunderstorm, May 10, 2017 in Olustee, Oklahoma. (Photo by Drew Angerer/Getty Images)

FOX NEWS - The family of a Texas man filed a $125 million lawsuit against the Weather Channel, claiming the network ignored its storm chasers’ history of reckless driving that led to the deadly “horrific” car crash in 2017.

Karen Di Piazza filed the wrongful death lawsuit Tuesday against the Weather Channel over the death of her son, Corbin Lee Jaeger, who died on March 28, 2017 when Kelley Williamson and Randy Yarnall’s vehicle slammed into his Jeep near Spur, Texas.

Williamson and Yarnell — popular storm chasers for the Weather Channel and stars of the show “Storm Wranglers” — were speeding down the highway in their Chevy Suburban at 70 mph when they ran a stop sign and smashed in Jaeger’s vehicle, the lawsuit stated. The duo was looking for any signs of a tornado and live streaming the drive on the Weather Channel’s Facebook page when the video stopped.

“The storm isn’t very far in front of us right now,” Williamson said during the live stream. “Actually, that’s what the dark is you’re seeing right there.” Jaeger, a 25-year-old storm spotter employed by the National Weather Service, Williamson, 57, and Yarnell, 55, all died on impact.