The head of the local council in Borodyanka surveyed extensive damage following the withdrawal of Russian forces from the Kyiv region in footage released on April 5, 2022. Credit: General Staff of the Armed Forces of Ukraine via Storyful

The United Kingdom and the European Union were set to take additional steps, including a ban on new investment in Russian and an EU embargo on coal, after the recent evidence of atrocities that has emerged in the wake of the retreat by Russian forces from areas around Kyiv, including the town of Bucha.

The U.S. acted against two of Russia's largest banks, Sberbank and Alfa Bank, prohibiting assets from going through the U.S. financial system and barring Americans from doing business with those two institutions.

The penalties cut off all of Putin’s close family members from the U.S. financial system and freeze any assets they hold in the United States.

President Joe Biden called the latest round of sanctions "devastating."

"I made clear that Russia would pay a severe and immediate price for its atrocities in Bucha," Biden said in a tweet. 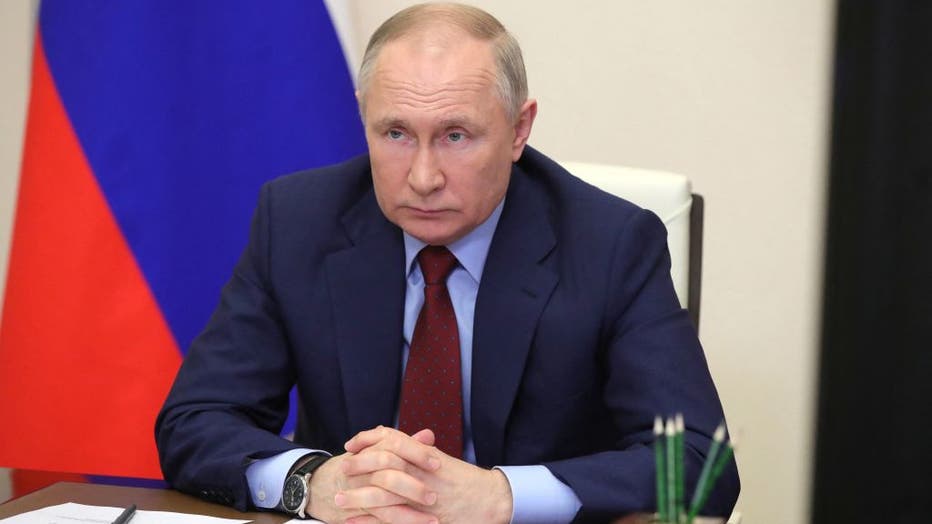 Russian President Vladimir Putin chairs a meeting on agriculture via a video link at the Novo-Ogaryovo state residence outside Moscow on April 5, 2022. (Photo by MIKHAIL KLIMENTYEV/SPUTNIK/AFP via Getty Images)

Biden was expected to will sign an executive order that would ban new investment in Russia by Americans no matter where they are living. The U.S. Treasury Department is preparing more sanctions against major Russian state-owned enterprises, according to the White House.

Videos and images of bodies in the streets of Bucha after it was recaptured from Russian forces have unleashed a wave of indignation among Western allies, who have drawn up new sanctions as a response. 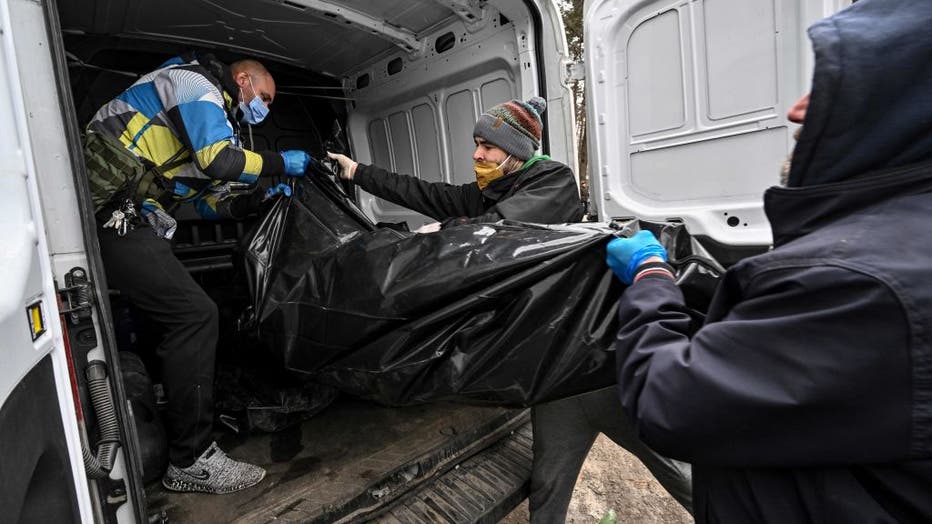 EDITORS NOTE: Graphic content / Policemen and city workers load a vehicle with body bags of six partially burnt bodies found in the town of Bucha on April 5, 2022, as Ukrainian officials say over 400 civilian bodies have been recovered from the wider

The European Commission’s proposed ban on coal imports would be the first EU sanctions targeting Russia’s lucrative energy industry over its war in Ukraine.

"A billion euro is what we pay Putin every day for the energy he provides us since the beginning of the war. We have given him 35 billion euro. Compare that to the one billion that we have given to the Ukraine in arms and weapons," Borrell said.

After several European countries announced the expulsion of Russian diplomats, the European Commission proposed a fifth package of sanctions including a ban on coal imports that could be adopted as soon as Wednesday once unanimously approved by the 27-nation bloc's ambassadors.

Satellite imagery just released shows a mass burial site in Bucha, Ukraine, and bodies laying on the streets for weeks after Russian forces destroyed the area. Russia has previously claimed that the bodies were on the city streets only after their forces had left the area, but the satellite images completely contradicts those statements, showing images of bodies on the streets well before Russian soldiers had left Bucha.

The United States and Western allies plan to impose a ban on all new investment in Russia. Among the other measures being taken against Russia are greater sanctions on its financial institutions and state-owned enterprises, and sanctions on government officials and their family members, according to White House press secretary Jen Psaki.

Separately, the Treasury Department moved Tuesday to block any Russian government debt payments with U.S. dollars from accounts at U.S. financial institutions, making it harder for Russia to meet its financial obligations.

European Commission President Ursula von der Leyen said the coal ban is worth 4 billion euros ($4.4 billion) per year and that the EU has already started working on additional sanctions, including on oil imports.

She didn’t mention natural gas, with consensus among the 27 EU countries on targeting the fuel used to generate electricity and heat homes difficult to secure amid opposition from gas-dependent members like Germany, the bloc’s largest economy.

But European Council President Charles Michel said the bloc should keep up the pressure on the Kremlin, suggesting that an embargo on gas imports should also be required at some point in the future.

"The new package includes a ban on coal imports," Michel said on Wednesday. "I think that measures on oil, and even gas, will also be needed, sooner or later."

The new package of measures proposed by the commission also includes sanctions on more individuals and four key Russian banks, among them VTB, the second-largest Russian bank. The bloc also would ban Russian vessels and Russian-operated vessels from EU ports.

Western allies have already cut out several Russian banks of the SWIFT financial messaging system, which daily moves countless billions of dollars around more than 11,000 banks and other financial institutions around the world.

RELATED: Dog lost in Ukraine during heavy fighting gets rescued by troops before joyfully reuniting with owner