Trump defended his management of the nation's most deadly health crisis in a century, dismissing Biden's warning that the nation had a dire stretch ahead due to spikes in infections.

LOS ANGELES - The head of the World Health Organization warned that countries in the Northern Hemisphere are at a “critical juncture” in the coronavirus pandemic amid rising cases and deaths.

“The next few months are going to be very tough and some countries are on a dangerous track,” said WHO Director-general Tedros Adhanom Ghebreyesus at a press briefing on Friday. “Many countries are seeing an exponential increase in cases,” he said, calling for immediate action to stem the pandemic’s deadly tide.

Maria Van Kerkhove, WHO’s technical lead on coronavirus, said the U.N. health agency had recorded about 445,000 new coronavirus cases in the past 24 hours, and nearly half of those were from Europe.

She said in many cities across Europe, “the capacity for ICU is going to be reached in the coming weeks.”

RELATED: US records over 71,000 new COVID-19 cases in highest single-day increase since July

More than two-thirds of the people living in France were to be subject to a nightly curfew starting at midnight Friday, hours after health authorities announced that the country had joined Spain in surpassing 1 million confirmed cases since the start of the pandemic.

France became the second country in Western Europe and the seventh world-wide to reach that number of known infections after reporting 42,032 new daily cases.

Experts say the real numbers of infections are probably much higher than the ones governments are reporting because of a lack of wide testing early on and the fact that some people don't develop symptoms.

Meanwhile, U.S. health experts have warned of a devastating winter if Americans fail to curb the spread of the coronavirus pandemic.

Dr. Tom Frieden, the former director of the U.S. Centers for Disease Control and Prevention, said earlier this month that another 20,000 COVID-19 deaths in the United States by the end of the October is “inevitable.” 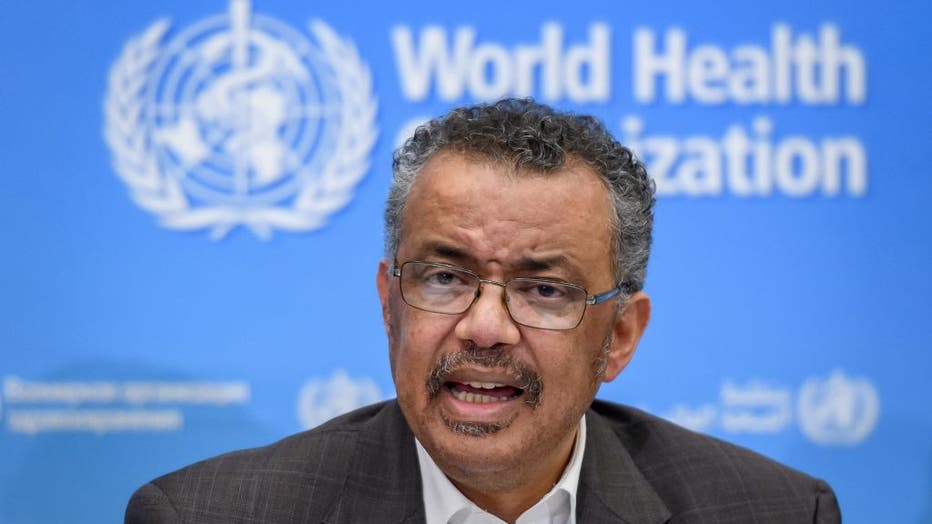 World Health Organization (WHO) Director-General Tedros Adhanom Ghebreyesus speaks during a press conference following a WHO Emergency committee to discuss whether the Coronavirus, the SARS-like virus, outbreak that began in China constitutes an inte (Photo by FABRICE COFFRINI/AFP via Getty Images)

The U.S. reported more than 71,000 new coronavirus cases Thursday, according to data from Johns Hopkins University — the country’s highest single-day total since July.

The United States is approaching a record for the number of new daily coronavirus cases in the latest ominous sign about the disease’s grip on the nation, as states from Connecticut to the Rocky Mountain West reel under the surge.

The impact is being felt in every section of the country — a lockdown starting Friday at the Oglala Sioux Tribe’s reservation in South Dakota, a plea by a Florida health official for a halt to children’s birthday parties, dire warnings from Utah’s governor, and an increasingly desperate situation at a hospital in northern Idaho, which is running out of space for patients and considering airlifts to Seattle or Portland, Oregon.

“We’ve essentially shut down an entire floor of our hospital. We’ve had to double rooms. We’ve bought more hospital beds,” said Dr. Robert Scoggins, a pulmonologist at the Kootenai Health hospital in Coeur d’Alene. “Our hospital is not built for a pandemic.”

In the southern Idaho city of Twin Falls, St. Luke's Magic Valley Medical Center said it would no longer accept children because it is overwhelmed with coronavirus patients. Except for newborns, all under age 18 will be sent 128 miles away in Boise.

The current CDC director, Dr. Robert Redfield, said in August that Americans could be facing “the worst fall” season due to the potentially deadly combination of the novel coronavirus, the seasonal flu, and people who aren’t abiding by necessary COVID-19 preventative measures.

“You do those four things, it will bring this outbreak down,” Redfield said. “But if we don't do that, as I said last April, this could be the worst fall from a public health perspective we've ever had.”