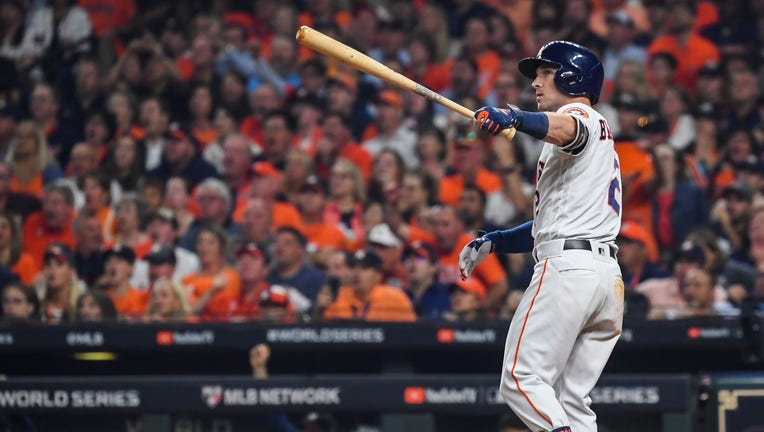 WASHINGTON, DC - OCTOBER 23: Houston Astros third baseman Alex Bregman (2) admires a two-run home run in the first inning during Game 2 of the World Series between the Washington Nationals and the Houston Astros at Minute Maid Park on Wednesday, Octo

HOUSTON - Walking off the field after the final out, Juan Soto smiled as he approached manager Dave Martinez and held up a pair of fingers.

By then, Minute Maid Park was nearly empty and mostly silent, except for a small clutch of fans behind Washington's dugout.

Suffice to say, it will look and sound a lot different Friday night at Nationals Park.

Halfway to a World Series championship in a city that hasn't claimed the crown since 1924, Washington has watched everything go its way in taking a 2-0 lead over the discombobulated Houston Astros, who were heavily favored at the start.

Not that anyone expected exactly this.

Those taut, tense pitching duels that were set with aces Gerrit Cole, Max Scherzer, Justin Verlander and Stephen Strasburg on the mound?

"Just about when we all predict what this is supposed to be about, the game will show you that you know maybe a little bit less and less the more you're around it," Astros manager AJ Hinch said.

Instead, the biggest star so far is a hitter - Soto, still in his first full season and already with a knack for clutch knocks.

It was Soto's eighth-inning hit that rallied the Nationals past Milwaukee in the NL wild-card game. He then hit a tying home run off Clayton Kershaw in the eighth during the deciding Game 5 of the Division Series.

Soto was just getting warmed up, apparently.

He's 4 for 7 with a homer and two doubles in the World Series, driving in three runs and scoring three and also stealing a base. And those shakes and shimmies he does at the plate, no wonder it's called the Soto Shuffle.

And how's this for timing - his 21st birthday is Friday, when Aníbal Sánchez is scheduled to start for the Nationals against Zack Greinke. It will be the first World Series game in Washington since 1933 with the Senators.

The teams were off Thursday, and a few players on both sides worked out on the field.

There were a couple of developments, however:

- President Donald Trump said he planned to attend Game 5 on Sunday night if the World Series goes that far. He would be the first sitting president to attend the Series since George W. Bush threw out the ceremonial first pitch at Yankee Stadium before Game 3 in 2001.

- Martinez said Patrick Corbin would start Game 4. Corbin relieved in the opener and there's always a chance he also could relieve in Game 3.

Soto and the Nationals wrapped up a 12-3 romp Wednesday night and made the Astros look awful in the process.

"Clearly, the Nats have outplayed us, bottom line. They came into our building and played two really good games," Hinch said. "We're going to have to try to sleep off the latter third of this game. I don't want to lump this into a horrible game; it was a horrible three innings for us."

Kurt Suzuki got the ball rolling - flying, rather - by leading off the seventh inning with a tiebreaking home run off Verlander. Things quickly turned messy for Houston, and the Nationals pulled away with late homers from Adam Eaton and Michael A. Taylor.

"Not in a million, billion, gazillion years did I ever think I'd homer in the World Series," Eaton said.

The Astros led the majors with 107 victories and now need to win two of three merely to send the matchup back to Houston.

"Things didn't go our way," he said. "We don't have time to feel bad about ourselves. Reset and come into an environment that we know is going to be pretty crazy and be ready to play baseball like we know we can."

The Assocated Press contributed to this report.