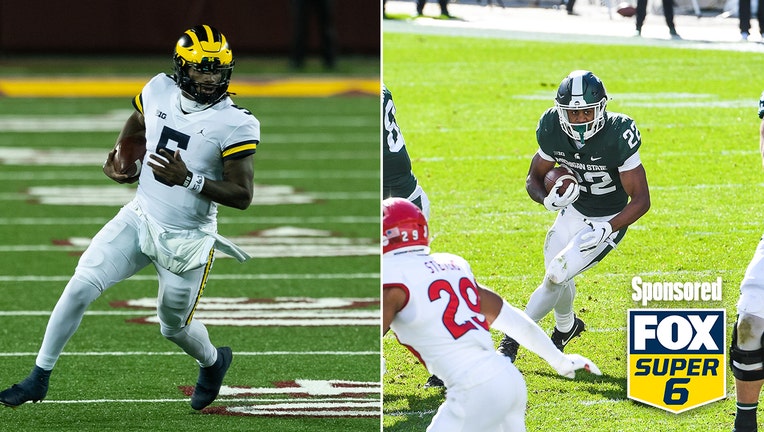 LEFT: Joe Milton #5 of the Michigan Wolverines carries the ball in the third quarter during the game against the Minnesota Golden Gophers at TCF Bank Stadium on October 24, 2020 in Minneapolis, Minnesota. The Wolverines defeated the Gophers 49-24. (P

All eyes are on Michigan this weekend. And it has nothing to do with anything involving politics.

On this week’s edition of FOX’s “Big Noon Saturday” college football telecasts sees the Battle of the Peninsula as Jim Harbaugh and the No. 13 Michigan Wolverines return to the “Big House” to face their neighbors from East Lansing, Michigan State.  Kickoff is set for 12 noon on FOX – preceded by Big Noon Kickoff starting at 10 a.m.

Michigan is coming off an impressive 49-24 road win over Minnesota last week while Michigan State will look to bounce back from a disappointing home loss to Rutgers in the debut of new head coach Mel Tucker.

And you could end up winning $1,000 along the way by playing FOX’s Super 6 contest. Just answer the six questions on the Super 6 app on your phone or tablet device and you could win the grand prize of $1,000. The best part of all is that the game is free.

Those six questions are:

Again, it’s so easy to play. Just make your choices on the Super 6 app and watch the game. If your answers are right, you can win the jackpot as you watch the Michigan/Michigan State game on Big Noon Saturday on FOX.