Football fans cheered on for a black cat as it invaded the field during a game between the Dallas Cowboys and the New York Giants. Video credit: ljthelegend via Storyful

EAST RUTHERFORD, N.J. - No one wanted any part of a black cat that strolled onto the field at MetLife Stadium during Monday's game between the New York Giants and Dallas Cowboys.

The cat was spotted on the 50-yard line near the end of the second quarter in between plays.

Play stopped for two minutes as the feline ran toward the endzone using its speed and lateral movement before stopping and crossing the goal line to cheer thousands in attendance.

It eventually left through a tunnel near the end zone.

Twitter, of course, chimed in on what was happening.

"Jerry Jones looking at the score at the half," one user wrote about the Cowboys owner.

Others commented on the cat's running game: "Completely untouched into the end zone," tweeted another user. 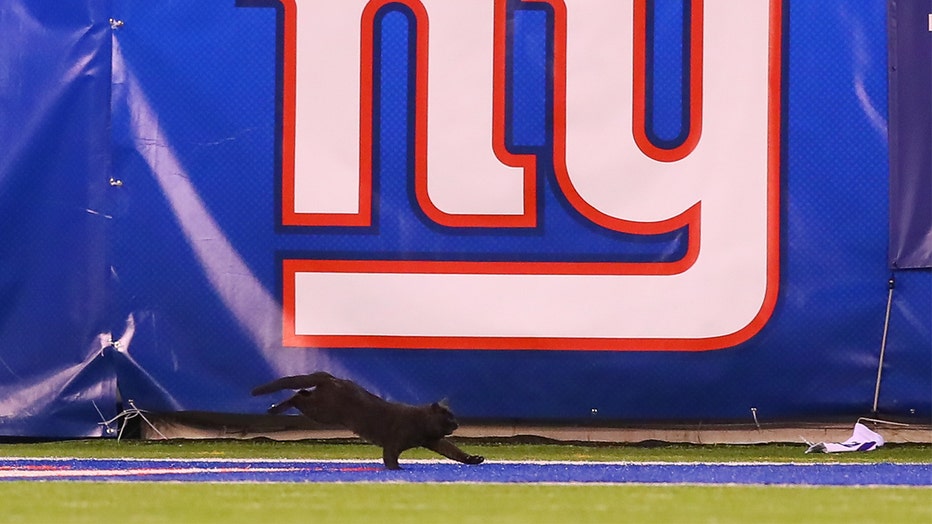 A black cat runs onto the field during the second quarter of the National Football League game between the New York Giants and the Dallas Cowboys on November 4, 2019 at MetLife Stadium in East Rutherford, NJ. (Rich Graessle/Icon Sportswire via Getty Images)

Another thought the feline showed promise of a potential NFL career.

"Quick burst off the line with the acceleration and top end speed it takes to succeed in the NFL. Unbelievable lateral movement. Black cat is expected to go #1 overall in 2020."

Some used the moment to take shots at the MetLife Stadium's other NFL franchise, the New York Jets.