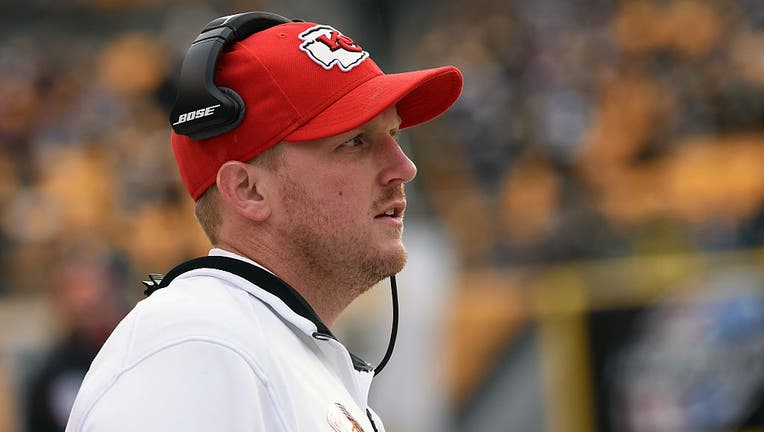 PITTSBURGH, PA - DECEMBER 21: Quality control coach Britt Reid of the Kansas City Chiefs looks on from the sideline before a game against the Pittsburgh Steelers at Heinz Field on December 21, 2014 in Pittsburgh, Pennsylvania. The Steelers defeated t

Reid, the 37-year-old son of Chiefs coach Andy Reid, had been scheduled to go to trial on Sept. 26. Britt Reid had faced up to seven years in prison, but the plea deal means he now faces a possible sentence of up to four years in prison. He entered his plea in Jackson County Circuit Court in Kansas City. Sentencing is set for Oct. 28.

While questioning Reid to confirm that he understood the plea deal, Circuit Judge Charles McKenzie said Reid also could serve a short period of time in prison and then be placed on probation if he qualifies for good behavior.

Investigators said Reid was intoxicated and driving about 84 mph (135 kph) when his Dodge truck hit the cars on an entrance ramp to Interstate 435 near Arrowhead Stadium on Feb. 4, 2021.

A girl inside one of the cars, Ariel Young, suffered a traumatic brain injury. Six people, including Reid, were injured in the crash.

In court Monday, Reid acknowledged he was drinking on the night of the crash.

"I really regret what I did," Reid said. "I made a huge mistake. I apologize to the family. I didn't mean to hurt anyone."

"The five victims of this crime are outraged the prosecuting attorney is not seeking maximum sentence allowable by law," Porto said. "The defendant is a prior offender whose actions caused a 5-year-old girl to be in a coma and seriously injured three others."

A Kansas City police officer who arrived at the scene of the crash reported he could smell alcohol and that Reid’s eyes were bloodshot, according to court documents. Reid had a blood-alcohol level of 0.113 two hours after the crash, police said. The legal limit is 0.08.

One of the vehicles he hit had stalled because of a dead battery and the second was owned by Ariel’s mother, who had arrived to help.

The Chiefs reached a confidential agreement with Ariel's family in November to pay for her ongoing medical treatment and other expenses.

Reid underwent emergency surgery for a groin injury after the crash. The Chiefs placed Reid on administrative leave and his job with the team ended after his contract was allowed to expire.

This is not the first legal issue for Reid, who graduated from a drug treatment program in Pennsylvania in 2009 after a series of run-ins with law enforcement. His father was coach of the Philadelphia Eagles at the time.

Britt Reid's older brother, Garrett, served a two-year sentence in a Pennsylvania state drug program after he was arrested on drug-related charges. Garrett Reid was found dead in August 2012 in his dorm room at Lehigh University, where he was assisting at the Eagles' training camp. A coroner ruled that he died of an accidental heroin overdose.