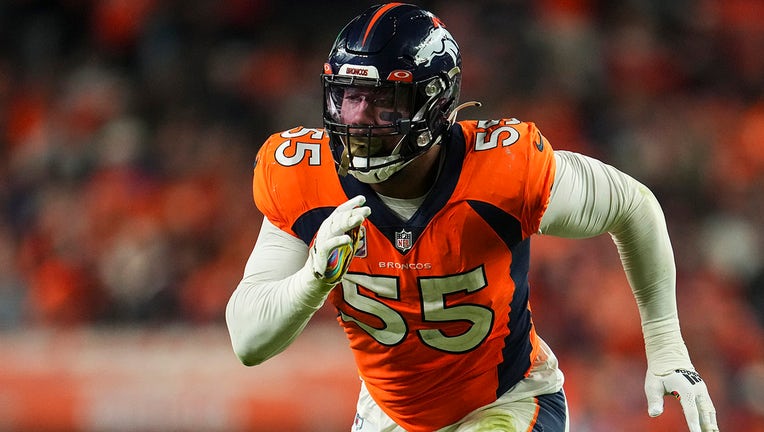 Bradley Chubb of the Denver Broncos defends against the Indianapolis Colts at Empower Field at Mile High on October 6, 2022 in Denver, Texas. (Photo by Cooper Neill/Getty Images)

ENGLEWOOD, Colo. - Two people with knowledge of the deal tell The Associated Press that the Denver Broncos are trading star-crossed pass rusher Bradley Chubb to Miami for a package that includes the Dolphins' first-round draft pick next year.

Both individuals spoke on condition of anonymity because the teams hadn't announced the trade, which includes Denver sending a fifth-round pick in 2025 to Miami and the Dolphins sending the Broncos a fourth-rounder in 2024 and running back Chase Edmonds.

The first-round pick is the one that the Dolphins acquired from San Francisco that allowed the 49ers to move up and draft quarterback Trey Lance in 2021.

The Dolphins forfeited their own 2023 first-round selection and a third-round selection in the 2024 draft after an NFL investigation found that Miami violated the league’s anti-tampering policy regarding communication with Tom Brady.

That probe stemmed from former Dolphins coach Brian Flores’ racial discrimination lawsuit against the league and also resulted in the suspension of Dolphins owner Stephen Ross, who has since returned.

Chubb was the fifth overall pick in the 2018 draft, a key part of Denver's stellar defense and a locker room leader.

Chubb has 5½ sacks this season — although none in the past three weeks — and a pair of forced fumbles after coming off his first fully healthy offseason since his rookie year when he had a career-best 12 sacks playing alongside Von Miller.

With the Broncos (3-5) off to a bad start under the Nathaniel Hackett-Russell Wilson coupling, general manager George Paton found more value in what he could get for Chubb in next April's draft than in the production he'd get from the former North Carolina State star over the next nine games.

Chubb is making nearly $14 million on his fifth-year option this season.

The NFL was formed in 1920 when 10 football teams came together in Canton, Ohio, and started the American Professional Football Association (APFA), now known as the NFL.

Paton had traded away his first- and second-round picks this year and next in the blockbuster deal that brought Wilson over from Seattle last spring, and now the Broncos will have a first-round selection next year to help them build around Wilson.

Paton on Thursday said the team wanted to keep its core players and that Chubb was one of them. But when asked if the Broncos are sellers in the market, the GM responded, "we’re going to do what’s best for the team."

Chubb said last week that the speculation he was a top trade target was "kind of cool," in that "it lets you know that I’m playing good ball where other teams notice it as well." But he added that he preferred to stay "in Denver long term. I've got my house. I got everything. I'm comfortable."

Chubb's career features almost as many missed games (25) as sacks (26).

He missed most of last season following surgeries on both ankles to remove bone spurs and didn't have a single sack in seven games upon his return. He also missed most of 2019 with a torn ACL, but bounced back in 2020 with a Pro Bowl season.

Chubb's departure comes at a time the Broncos are hurting in the pass rush department, although Randy Gregory (knee) and Baron Browning (wrist) might come off IR by the time the Broncos, who are on a bye, travel to Tennessee on Nov. 13.