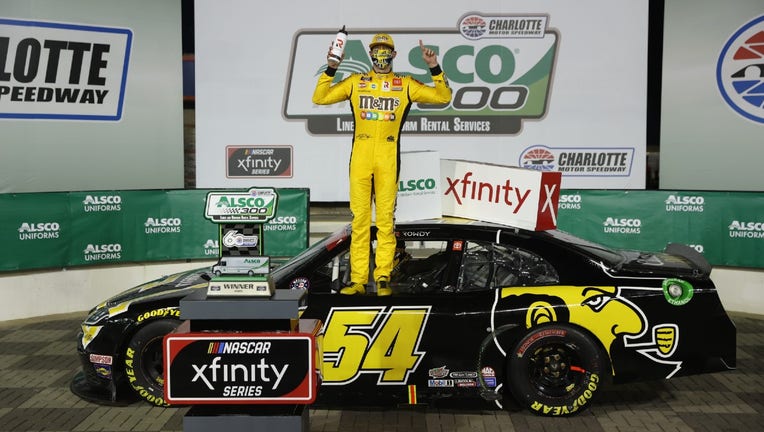 Kyle Busch, driver of the #54 App State Class of 2020 Toyota, celebrates in Victory Lane after winning the NASCAR Xfinity Series Alsco 300 at Charlotte Motor Speedway on May 25, 2020 in Concord, North Carolina. (Photo by Chris Graythen/Getty Images)

After a crash involving several cars sent the race into overtime, Cindric passed Busch on a restart starting at the inside lane of the front row. But Busch battled back and pushed the pedal to the floor, passing Cindric on the last lap to earn his 18th overall win at Charlotte Motor Speedway across NASCAR's top three series -- the most of any driver.

"I thought choosing the outside was the right way but obviously it wasn't. I don't know," Busch said. "Those guys put up a whale of a fight tonight on restarts. I guess I'm not good at it anymore."

Cindric thought he had Busch beat.

"To almost beat one of the best in the business on worse tires, I never lifted, I never lifted until I knew I was done," Cindric said. "I wanted to win so bad."

Busch appeared in control for most of the race-winning the first two stages but was assessed a speeding penalty on pit row with 38 laps to go, dropping him to 10th place. But Busch battled back through the field with the help of a series of strong restarts on cautions in the final 30 laps.

There were just five cautions in the first 155 laps, but six yellow flags over the last 45 laps.   Busch recaptured the lead with 10 laps to go, but nearly gave it all away in overtime.

Busch drove a No. 54 Toyota sponsored by the Appalachian State University class of 2020

"Hopefully this will lift your spirits, we won one for you," Busch said to the App State students who didn't get to have a traditional graduation ceremony due to the coronavirus

The event was run without fans in attendance.

Busch is in the midst of running all seven races in 11 days at Darlington and Charlotte since NASCAR returned to action after being sidelined for two months because of the coronavirus.

It was a tough night for Darlington winner Chase Briscoe, who finished 20th.

Briscoe, who was looking for his third Xfinity Series win of the season, drew penalties for an uncontrolled tire and speeding on pit road and then sustained damage to his car after hitting the wall with 45 laps to go when Timmy Hill's engine blew up. Things went from bad to worse when he suffered damage to the right front of his car with 28 laps to go.

Jeffrey Earnhardt pulled out of his pits too early and wound up turning a lap with a jack wedged under his car.   It was the second of four races in four days at the 1 1/2-mile track at Charlotte.

Brad Keselowski won the Coca-Cola 600 on Sunday night in overtime after a late caution flag cost Chase Elliott an almost certain victory. The Truck Series returns to the track for the first time in more than three months on Tuesday night, followed by another Cup race on Wednesday as NASCAR.