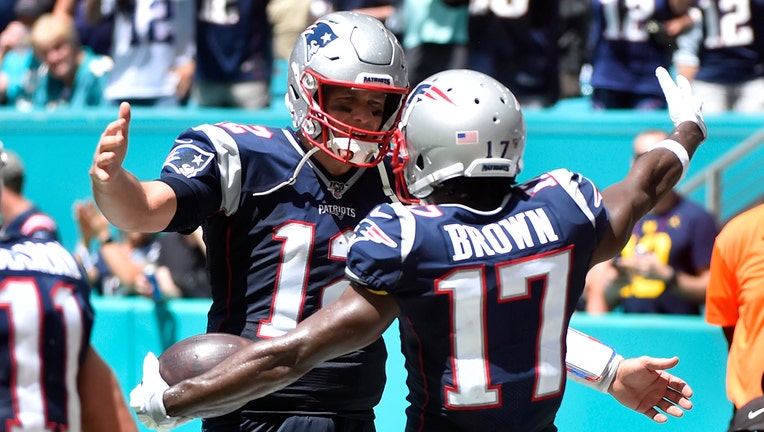 Antonio Brown #17 of the New England Patriots celebrates with Tom Brady #12 after catching a touchdown in the second quarter of the game against the Miami Dolphins at Hard Rock Stadium on September 15, 2019 in Miami, Florida. (Eric Espada/Getty Image

TAMPA, Fla. - Tom Brady hoped former teammate Antonio Brown would join him on the field in Tampa but was told 'no' by head coach Bruce Arians, according to NFL on FOX's Jay Glazer.

Now it appears Brady will get his wish, after all. Arians confirmed to Glazer the Buccanneers have reached a deal with Brown to play out the year as a Buccaneer.

"Yep, Antonio Brown, going to be a Buccaneer," Glazer said in a Twitter video after speaking to Arians about the deal. "Actually just got off the phone with Bruce and, early on when Tom Brady signed with the Bucs, he did bring up Antonio Brown. Back then, Arians told [Brady] an emphatic 'no,' unless their wide receiver core got injured."

Arians has a history of being critical of Brown after working with him in Pittsburgh.

But now, injuries seem to have persuaded Arians otherwise. Chris Godwin, Mike Evans, and Scotty Miller have been out or limited by injuries.

Brown was suspended through week 8 by the NFL for violating the league's personal conduct policy, meaning his first game with the Buccaneers would be November 8 against the Saints.