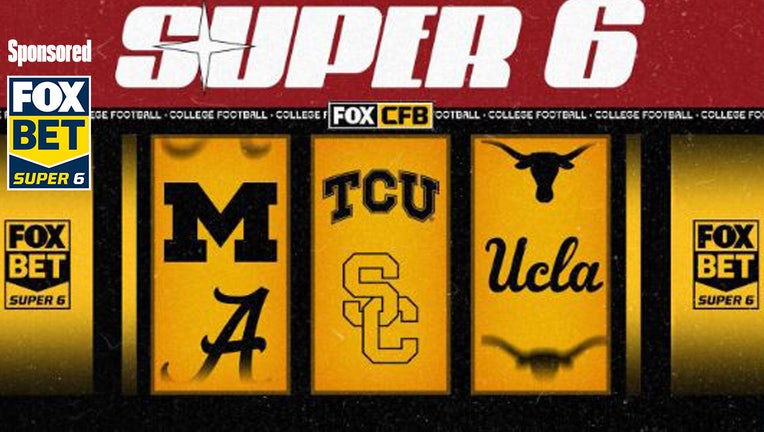 FOX Bet Super 6 College Football Pick 6 challenge is back for Week 6. Find out how you can win a piece of the $25,000 jackpot! (FOX Sports)

College football Week 6 is at our doorstep, threatening to barge in like the Buckeyes in the end zone on basically every possession.

And now that we're halfway through the regular season, it's time to take stock on how and where we've shelled out cash supporting our football habit.

Tickets and travel to games. A few bucks here and there on some top squads' moneylines. Team logo t-shirts and hoodies whose taxes and shipping cost as much as the clothes. Can you tell someone has some very personal experience in this department?

Well, in Week 6, we have a chance to put some green back in our wallets by playing the FOX Bet Super 6 College Football challenge. The jackpot is $25,000!

Imagine how many official team hoodies you can put in your cart with an extra $25,000 on hand.

To get in the game for your chance at the prize, download the FOX Bet Super 6 app, pick the winners and margins of victory of the six marquee matchups and submit your picks before the games kick off on Saturday.

It's really that easy and so much fun. More importantly, it's free to play! And if you were wondering if people really do win, the answer is yes. Just last weekend, we gave away $1,000,000 of Terry Bradshaw's money!

And if you need a little help before you make your picks for this week's contest, we have you covered! Check out our predictions for these exciting Week 6 matchups.

With every week that passes, Jim Harbaugh is proving his Wolverines deserve to be in the College Football Playoff (CFP) conversation and that their semifinals appearance last season was not a fluke.

We hear you loud and clear, Coach.

Big Blue rolls into this game 5-0 straight-up (SU) and 3-2 against the spread (ATS). The squad also comes into this contest knowing that they own the series. Michigan leads Indiana all-time 60-10, including last year's 29-7 spanking.

Do the Hoosiers — the team that hasn't lost a home game this season — stand a chance against the Wolverines? To keep it close, yes. To win outright, no.

Michigan's not-so-secret weapon, running back Blake Corum, has already rushed for 611 yards and 10 touchdowns this season. And there won't be any stopping him this weekend when he and his squad head to Indy for the sixth stop on their national championship campaign.

Prediction:
Michigan by 7 to 9 points

TCU took Oklahoma to the woodshed and left every splinter where it hurts in Week 5. We all saw that 55-24 dismantling of the Sooners, and it was ugly.

The Horned Frogs will be out for more frog food when they face the Jayhawks this weekend. And it looks like Kansas might be just the snack TCU is hunting.

The Purple and White are No. 2 in the nation in both scoring offense and total offense. In the state of Texas, TCU is the only undefeated FBS program. The Frogs own the all-time series 25-9-4, and since TCU joined the Big 12 in 2012, the team is 9-1 against KU.

So Jayhawks, we see you with your 5-0 record and your 60% third-down conversion rate. But TCU has one of the best rushing attacks in the nation and one of the most efficient passing quarterbacks in Max Duggan.

Kansas, come talk to us when college basketball tips off.

Prediction:
TCU by 4 to 6 points

The Longhorns at 3-2 are not as average as their record suggests. In Week 2, they took No. 1 Alabama down to the wire in a game they lost 20-19. Their other loss was to Texas Tech in Week 4 when they fell 37-34. Texas is ready for battle, and the official snapback starts with Oklahoma this weekend.

At FOX Bet, away team Texas is favored by 7 points over OU, and we're siding with the oddsmakers on this one. We'll tell you why.

Oklahoma has allowed opponents 41 and 55 points in its last two losses. Considering the Sooners rank 94th in total defense, that certainly tracks. Texas' offense, on the other hand, ranks 20th in the nation, averaging 36.8 points per contest.

And since honesty is always the best policy, we're just gonna say it. We're still not convinced that Brent Venables is the right man for Oklahoma's head coaching job.

UCLA is another one that made us look twice after the squad took down Washington in Week 5 by a final score of 40-32. In true Pac-12 fashion, it had all the makings of a Pac-12 After Dark thriller. But if you had asked us at the beginning of the season to predict the winner of this particular game, Utah would have been the easy answer.

Oh, how the tides have changed.

Like Kansas, the Bruins said they weren't waiting until basketball season to be relevant. UCLA completes 73.4% of its passes, and the passing game, led by QB Dorian Thompson-Robinson, ranks fourth in the country.

Utah, though, is as excellent as advertised. The Utes are averaging 42 points per game and are only allowing 155.4 passing yards per contest. The last time these two teams met was during the 2021 season, and Utah won that matchup at home 44-24.

This year, however, UCLA gets to play Hollywood host down in Southern California. And the Bruins do own this all-time series 11-8. Make that 12 after this weekend.

Call it whatever you want, but USC is back on the map. Thanks, Lincoln Riley.

At FOX Bet, the Trojans are 13-point favorites over Washington State in this one. And while we applaud Washington State for taking the trip to the Coliseum for some fun in the California sun, this game will be all about SC.

The Trojans are the only team in the country to force at least 15 turnovers through the first five weeks of play, their 42.2 points per game lead the Pac-12 and their one turnover is tied for fewest in the country.

If the Cougars are looking for some fun activities to make their trip worthwhile, we've heard the beaches are beautiful, and the street food is tasty.

Texas A&M beat Bama 41-38 in the regular season last year, which means these two teams have had this game circled in maroon and crimson for 12 months. There's always a price for poking the bear. And Nick Saban & Co., do not forget.

The Aggies aren't having the best year. They lost to Appalachian State in Week 2. Should we just stop right there? No shade to App State, but that loss, coupled with falling to Mississippi State last week, has effectively ended any CFP hopes A&M might have had.

Why so average, Aggies?

And just to give you a glimpse into the greatness that continues to be Alabama football, the Tide — as usual — are rolling.

No other squad in the nation has more 50+ plays from scrimmage than the Tide. The 236.4 yards they allow per game ranks fifth in the country. And they average 7.35 yards per carry, which is the best in the country.

Oh. And Saban is 26-2 against former assistants.

Go ahead and call it 27-2 come Saturday.

Prediction:
Alabama by 18 to 21 points

Open your FOX Bet Super 6 app and make your selections before Saturday's games kick off. Remember to tag us across all social media platforms at @FOXSuper6 and @EricaReneeD and show us your picks using the #EricaSuper6 hastag!