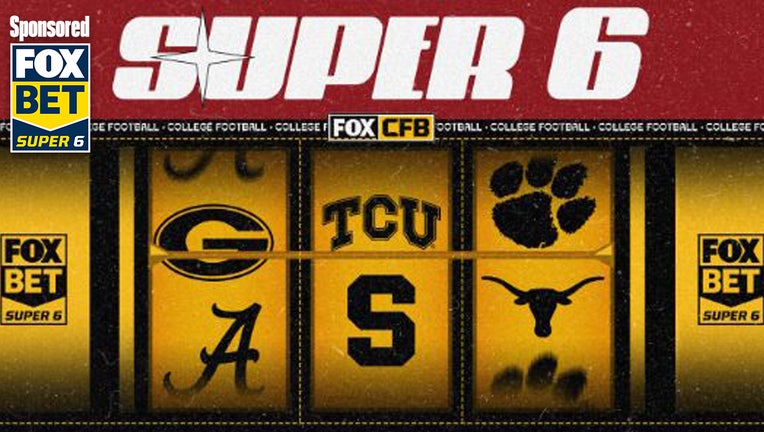 $25,000 is up for grabs in the FOX Bet Super 6 College Football Pick 6 challenge. Find out how you can cash in on the jackpot in Week 10! (FOX Sports)

Cue all the outrage!

Don't believe us? Just jump on Twitter, and you'll see fans in their feelings screaming about how their team shoulda, coulda, woulda been ranked this, that or the other. "These rankings are so subjective!" And our favorite, "SEC BIAS!"

Guys, these are the cards we were dealt. We're just here to play along.

And speaking of playing along, it's time for you to play the FOX Bet Super 6 College Football Pick 6 challenge.

FOX Bet Super 6 is a free-to-play contest. To get in the game for your chance at the $25,000 prize, download the FOX Bet Super 6 app, pick the winners and margins of victory of the six college football marquee matchups and submit your picks before the games kick off on Saturday.

Doesn’t matter if you're riding with the Buckeyes or the Bulldogs, the Horned Frogs or the Longhorns, this is the game for you.

Before you make your picks for a chance at this week's 25 grand, let's dive into our predictions for Week 10 of the college football season!

The Texas Tech Red Raiders come into this matchup with their disappointing 4-4 record and probably with a "let's get this year over already" attitude. Their in-state opponent has enjoyed a different kind of season. And by different, we mean perfect. The 8-0 Horned Frogs had an incredibly impressive stretch where they defeated top 20 teams in four consecutive weeks.

The Frogs are so good, in fact, that our own RJ Young insists that if TCU had more brand recognition, it would be higher than No. 7. But seven is still great, and the horned amphibians have more than enough firepower to take control of this game against TTU.

TCU is the only program in college football averaging at least 300 yards per game passing, 200 rushing, and at least 20 passing and 20 rushing touchdowns. The Frogs rank second in the nation in yards per play and third in scoring offense. An offensive juggernaut, to be honest.

So maybe the committee did get it wrong by not ranking the Frogs higher. Either way, they'll run away with this one.

Oh, what could've been, Syracuse. Orange bettors were cruising on that Cuse moneyline for six straight weeks, but then they dropped two games to Clemson and Notre Dame in a row. This week, though, the bushel gets back on track with a win at Pitt.

Now, Pitt won't be a pushover. The Panthers lead the ACC in time of possession, and on offense, they have a not-so-secret weapon in running back Israel Abanikanda. Israel leads the nation in all-purpose yards and ranks fifth in rushing.

But Syracuse still has the advantage. The Orange give up just 164.5 passing yards per game, which ranks third in the nation. And they've scored on 31 of their 33 trips to the red zone this season. Syracuse also dominates the first quarters of games, outscoring opponents 82-30.

This game will be too close for comfort for Syracuse in the first half, but once the Orange get their groove back, expect a bounce-back W.

Prediction:
Syracuse by 9 to 11 points

This game is more than just a battle between SEC rivals. It's a matchup of SEC East foes, who are undefeated and control their own destinies on a path to December's coveted SEC Championship game in Atlanta. At stake are bragging rights and more importantly, a College Football Playoff berth. But only one team can win.

And that one team will be the national champion Georgia Bulldogs.

This game will have you biting your nails so hard that you might as well kiss your cuticles goodbye.

The Dawgs are 8-point favorites at FOX Bet, but this battle will be closer than that. The Vols will give the Dawgs all they can handle Saturday.

UT's offense ranks first in the nation in both scoring and total offense. The Vols allow an average of 92.9 rushing yards per game, ranking ninth in FBS. Heisman-favorite QB Hendon Hooker has thrown a TD pass in 20 straight games. That's the longest streak in the nation.

So where do the Dawgs have the edge? Georgia averages 41.8 points per game, which ranks sixth in the nation. UGA also leads the nation in the red zone, going 46-of-47. And the Georgia defense is nothing to play with. That unit has held opponents scoreless in 18 quarters this season.

Georgia will be energized playing between the hedges in front of its home crowd at Sanford Stadium. Sometimes, you need a little help from 92,000 of your closest friends to get you one step closer to going back-to-back.

Prediction:
Georgia by 5 to 6 points

In what parallel universe are we living where Bama isn't at the forefront of every CFP conversation? Welcome to the college football world of one-loss Bama.

Since the Tide dropped that game to the Vols in Week 7, fans haven't been too heavy on the "we want Bama" talk. How quickly we forget, however, that Bama is still first in the SEC West, and they're in a prime position to represent that side of the conference in the SEC Championship game.

Alabama's defense has been a huge part of its solid season. The Tide hold opponents to a 26.4% conversion rate — a percentage that ranks fifth-best in FBS. Alabama averages 6.02 yards per rush which is tied with Army for best in the nation.

We're only partially kidding. After all, the 6-2 season that LSU has put together — a season where the squad averages 35.1 points per game — is one the Tigers should be proud of.

But we like the Tide to roll in a close one.

Prediction:
Alabama by 7 to 8 points

Texas was supposed to be back. The Longhorns lost a 20-19 heartbreaker to Alabama in Week 2. Texas fans were happy with how close the Horns played the Tide. Bettors were pleased with the cover. Then Texas lost to Texas Tech, but that 37-34 loss was also close.

But then they lost again to Oklahoma State — a 41-34 defeat that, by all accounts, the Longhorns should have won.

This weekend, Burnt Orange gets another chance to prove its program is moving toward elite status. But Kansas State is red-hot and rolling, so Week 10 will be all about the Wildcats.

We really could play the game film of K-State obliterating Oklahoma State last week and call it a day. Who wants to face that team the week after that showing?

Well, the Longhorns get that honor, and this is what they're in for: A Wildcat team that has racked up 11 interceptions this season, allows opponents an average of just 17.3 points per game and outscores teams 164-60 in the first half.

Prediction:
Kansas State by 9 to 11 points

Let's say the quiet part out loud. This will be a cupcake game for Clemson. And that just shouldn't be the case, but that's what we anticipate based on how uninspired the Fighting Irish have played this year.

Notre Dame is 5-3 and has lost games to Ohio State, Stanford and Marshall! No shade at Marshall but Marshall? After all the hype surrounding new head coach Marcus Freeman's hiring, the season has been an ultimate letdown in South Bend.

Though the Tigers are the better team, they've had a couple of near-death experiences themselves. It took the Tigers two overtimes to defeat Wake Forest, and they beat Syracuse 27-21 in a game that the Orange led most of the way. But even if it has been by the skin of their teeth, they've managed a perfect 8-0 record. And the Tigers have done this with their scoring offense and defense that both rank in the nation's top 20.

Leprechauns won't be so lucky this week.

Prediction:
Clemson by 5 to 6 points

Open your FOX Bet Super 6 app and make your selections before Saturday's games kick off. Remember to tag us across all social media platforms at @FOXSuper6 and @EricaReneeD and show us your picks using the #EricaSuper6 hastag!