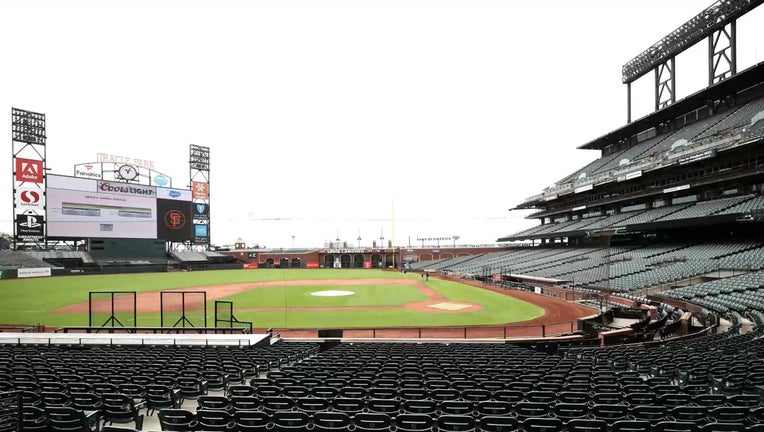 SAN FRANCISCO, CALIFORNIA - JULY 03: A general view of an emptyt Oracle Park before the start of summer workouts on July 03, 2020 in San Francisco, California. (Photo by Ezra Shaw/Getty Images)

SAN FRANCISCO - The San Francisco Giants Wednesday night home game against the Los Angeles Dodgers has been postponed in the wake of the police shooting of Jacob Blake, a black man, in Wisconsin, the team said.

The down-to-the wire postponement for the 6:45 p.m. game came after the NBA's Milwaukee Bucks did not take the floor for Game 5 of their first-round playoff series with the Orlando Magic.

The NBA later announced that all three games scheduled for Wednesday night were postponed.

Prior to the Giants-Dodgers postponement, the Milwaukee Brewers and Cincinnati Reds reportedly agreed not to play Wednesday night's game at Miller Park. The San Diego Padres and Seattle Mariners game has been postponed, too.

Blake, 29, was shot on Sunday multiple times by police in Kenosha, which is about 40 miles south of Milwaukee. The Blake family's attorney said Blake was paralyzed from the waist down and that it would ''take a miracle'' for him to walk again.

The shooting of Blake was captured on cellphone video Sunday, sparking protests in Kenosha and several other cities.

KNBR tweeted a video that reportedly shows the Giants having a team meeting before batting practice, followed by both teams clearing the field.