The professional sports world speaks out against racial injustice

LOS ANGELES - In a typically awkward way, Major League Baseball has been pulled into America’s discussion about racial injustice.

Some teams are playing. Some aren’t. Some have played with individual players sitting out.

But across the sport, one theme became clear: Baseball shouldn’t avoid potentially difficult conversations and decisions regarding social issues. Though the process may be imperfect, there was agreement that coaches, players and teams should speak their mind.

“This is at the forefront now,” said Oakland infielder Tony Kemp, who is Black. “By sitting out tonight’s game, I feel like it’s just a small building block of what we want to see. These couple days are historic times in sports. One day our kids are going to look back and ask us what was going on and what did we do to help bring awareness to these issues in the world and we’re going to say, ‘One game we just decided not to play.’”

Oakland's game at Texas was among five that were postponed by Thursday evening, along with Philadelphia at Washington, Minnesota at Detroit, Colorado at Arizona and Boston at the Blue Jays in Buffalo, New York. Other games were played as scheduled. 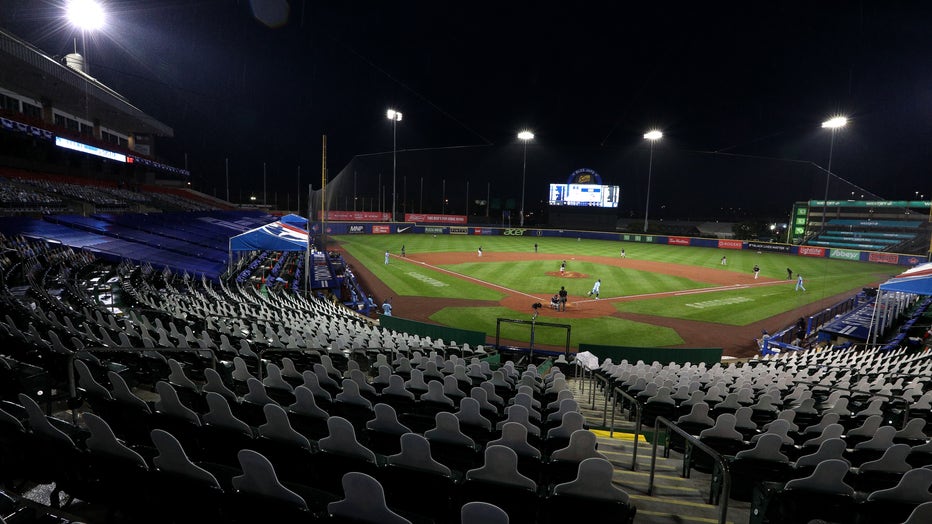 Rain falls at Sahlen Field during a game between the Toronto Blue Jays and the Boston Red Sox on August 26, 2020 in Buffalo, New York.

The decisions not to play Thursday night came a day after three MLB games were postponed in response to the police shooting of a Black man, 29-year-old Jacob Blake, in Wisconsin last weekend.

The Phillies met Thursday about 5½ hours ahead of the scheduled start of the game at Nationals Park. After 30 to 40 minutes of discussion, the players decided to not play.

Phillies manager Joe Girardi passed that along in a phone call to Nationals counterpart Dave Martinez, who said the Nationals would join their opponents in sitting out.

“We’re in this together -- this fight for equality and social justice,” Girardi said. “In this world, I’ve always believed, there’s two things you can’t live without. It has nothing to do with food and water. It’s love and hope. And I don’t think we’re doing a good job in our country giving that to everyone and I think that needs to be the focus here.”

A statement from The Players Alliance, which consists of more than 100 current and former Black players, said current players will donate their salaries from Thursday and Friday in “supporting our efforts to combat racial inequality and aid the Black families and communities deeply affected in the wake of recent events.”

Baseball has dealt with a slow decline in the number of Black players for decades. In recent seasons, the percentage of Black players has hovered around 8%. For a sport that proudly recognizes Jackie Robinson — who broke MLB’s color barrier in 1947 with the Brooklyn Dodgers — the decline has been frustrating for some.

Baseball will celebrate Jackie Robinson Day on Friday. It's normally on April 15 but was moved because of the COVID-19-altered schedule to Aug. 28, which is the anniversary of the March on Washington in 1963 and also the day in 1945 when Dodgers GM Branch Rickey met with Robinson to discuss breaking the color barrier.

"I think he would be amazed at the lack of progress in his eyes,” said Milwaukee's Lorenzo Cain, who is Black. “I don’t know personally what he went through but I know the stories. I know for a fact it wasn’t easy for him to be in the situation he was in. He paved the way for guys like me to go out and play this game and be in this position today. I’ll always thank him for that.

“The fact we’re talking about this in 2020, I don’t see the progress in that. It’s almost like we’re going backwards."

Texas manager Chris Woodward said there were some individual conversations with his players before Wednesday’s game and they were OK playing. He said then that the Rangers were going to “fully support” any of their players who decided not to play, and the same for the A’s if they decided not to play.

The three games postponed Wednesday — the Cincinnati Reds and Brewers in Milwaukee, Seattle Mariners and Padres in San Diego and the Los Angeles Dodgers and Giants in San Francisco — were being made up as part of doubleheaders Thursday.

Those baseball postponements came after the NBA’s Milwaukee Bucks didn’t come out on the floor for Game 5 of their first-round playoff series with the Orlando Magic on Wednesday. NBA officials later announced that all three of the day’s scheduled playoff games had been postponed, and games scheduled Thursday also weren't played.

MLS and WNBA games have also been postponed.