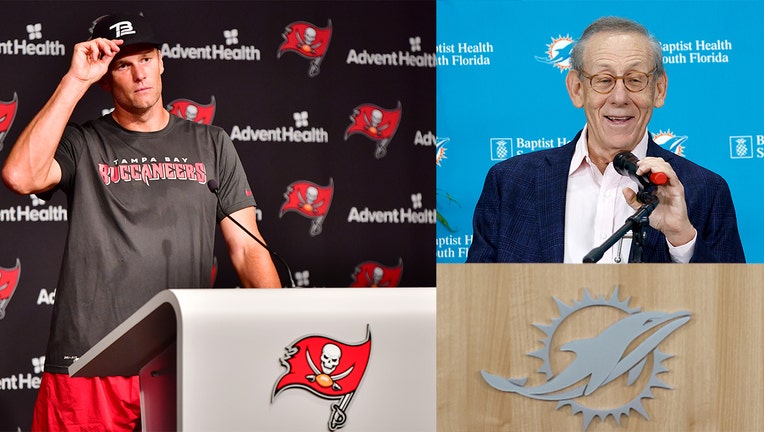 MIAMI - The NFL has imposed disciplinary action against the Miami Dolphins for violating the league's integrity of the game policy.

According to the NFL, the Dolphins had "impermissible" communications with quarterback Tom Brady and former New Orleans Saints head coach Sean Payton.

NFL Commissioner Roger Goodell notified the team Tuesday about the violations and discipline. The NFL stripped the Dolphins of their 2023 first-round draft pick and 2024 third-round pick, while Dolphins owner Stephen Ross has been suspended through Oct. 17 and fined $1.5 million.

The NFL has stripped the Miami Dolphins of two draft picks after determining the team had impermissible communications on two different occasions with quarterback Tom Brady, despite Brady being under contract with the New England Patriots and then the Tampa Bay Buccaneers. Dolphins owner Stephen Ross has been suspended through mid-October and fined $1.5 million.

During this period, Ross cannot be present at the Dolphins' facility and may not represent the club at any team or NFL event. He may not attend any League meeting prior to the Annual Meeting in 2023, is removed from all League committees indefinitely, and fined $1.5 million.

Additionally, Bruce Beal, the Dolphins' Vice Chairman/Limited Partner, can't attend any League meeting for the remainder of the 2022 season and is fined $500,000.

Tuesday's announcement comes after the league conducted a six-month investigation of the Dolphins which determined that the franchise violated the NFL's anti-tampering policy on three different occasions.

Conversations between Brady and the Dolphins began in 2019-2020 while he was still under contract with the New England Patriots.

Miami again had discussions with Brady and his agent during and after the 2021 season, while the seven-time Super Bowl winner was still under contract with the Tampa Bay Buccaneers.

The Dolphins' talks with Brady focused on him becoming a limited partner in the organization and potentially serving as a football executive, although at times they also included the possibility of his playing for the Dolphins.  Ross and other team executives were involved in these discussions, per the NFL's report.

In January, the Dolphins had impermissible conversations with Payton's agent Don Yee regarding the former Saints coach becoming the head coach of Miami. The NFL found that the Dolphins did not have consent from New Orleans to have these discussions.

"The investigators found tampering violations of unprecedented scope and severity," Goodell said in a statement Tuesday. "I know of no prior instance of a team violating the prohibition on tampering with both a head coach and star player, to the potential detriment of multiple other clubs, over a period of several years. Similarly, I know of no prior instance in which ownership was so directly involved in the violations."

Dolphins did not lose on purpose

The NFL, in their investigation, also determined that Miami did not intentionally tank games to improve their draft positioning.

According to the report, Ross expressed his belief Miami's position in the 2020 NFL draft should take priority over the team's win-loss record. These remarks were made frequently to team president and CEO Tom Garfinkel, general manager Chris Grier, senior vice president Brandon Shore and former head coach Brian Flores.

Flores was fired by Miami earlier this year after leading the Dolphins to a 24-25 record over three years. They went 9-8 in their second straight winning season, but failed to make the playoffs during his tenure.

Flores sued the NFL and three of its teams in February, saying racist hiring practices by the league have left it racially segregated and managed like a plantation.

The lawsuit said the firing of Flores was typical for Black coaches who are not given the latitude other coaches receive to succeed. It noted that Flores led the Dolphins to back-to-back winning seasons for the first time since 2003.

The improvement came even though, the lawsuit contends, Ross told Flores he would pay him $100,000 for every loss during the coach's first season because he wanted the club to "tank" so it could get the draft's top pick.

The lawsuit alleged that Ross then pressured Flores to recruit a prominent quarterback in violation of the league's tampering rules. When Flores refused, he was cast as the "angry Black man" who is difficult to work with and was derided until he was fired, the suit said.

FOX 13 Tampa contributed to this story.  This story was reported from Washington, D.C.