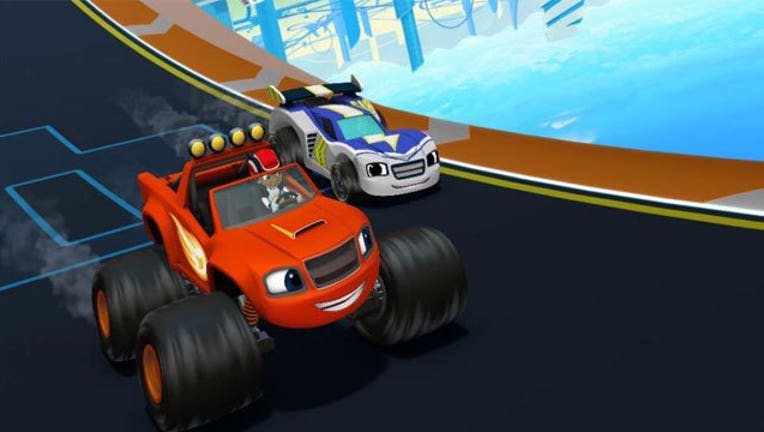 From cars to cartoons, Jimmie Johnson's next dash at the track comes in animated form.

The six-time NASCAR champion lends his voice in a series of race car-themed episodes on the Nickelodeon series "Blaze and the Monster Machines."

Johnson voiced Dash, a car that is friendly, fast and the ultimate racing buddy for titular character Blaze.

Johnson fell in love with racing as a kid by going to the track with his dad. He appreciated the fact that most NASCAR tracks now offer some sort of kid-friendly ticket deals to get them out with their families on Sundays, but realized there must be other ways to reach the next generation of fans.

He voiced a lobster last year in the Nick Jr. show "Bubble Guppies."

Johnson's two young daughters, Genevieve (5) and Lydia (2), are fans of the "Blaze" show that focuses on science, technology, engineering and math education. While his family often joins Johnson in victory lane, the celebrations might not top the cool factor of having dad pop up as a cartoon.

"There's a lot of shock value with that one," he said, laughing.

Johnson showed his delighted daughters photos of what his character will look like in "Blaze."

Johnson has dabbled in acting — he's had guest spots in TV shows such as "Vegas" and "Breaking In" — but had the most fun with voiceover work.

"You read the lines and think you can just add some inflection in your voice and you've done your job," he said. "But you kind of go so over the top. It's almost embarrassing. As soon as you embarrass yourself, they say, 'Perfect, more of that!'"

Johnson also cameoed as an airline pilot in the new video for the song "Ain't No Man" by The Avett Brothers.

The video features Scott Avett as he makes his way through the Asheville Regional Airport on his way to join his brother and the rest of the band on the road. Avett boards the plane and the video cuts to a quick appearance from a smiling Johnson who gives a thumbs-up as the pilot.

"I love their lyrics, I love the way their music makes me think," Johnson said. "And seeing them live is like no other experience."

Johnson might be most comfortable talking cars, though. He was set to host "Race Hub" Wednesday night on FS1.

CANCER FIGHT: Martin Truex Jr. and his long-time girlfriend Sherry Pollex were set to host their annual "Catwalk for a Cause" fundraiser on Wednesday night. The event helps raise awareness and funds for pediatric cancer and last year's show raised more than $250,000."

Pollex is in remission from ovarian cancer and recently launched her website SherryStrong.org to help women and their families in coping with the disease. She was diagnosed with Stage 3 ovarian cancer in August 2014.

"It's my way of giving back to everybody that supported me in my journey," she said. "I've had a lot of women — and men — reach out to me on Twitter, social media, at the race track, that told me my story was inspiring them. When I first got diagnosed, there just wasn't a lot of resources for women that have my type of women, especially young women. I wanted to create a resource for a place where they could go and talk to each other."

The 37-year-old Pollex said breast cancer and other cancers are the forefront of awareness more than ovarian cancer, one reason why she wanted to share her story. She's encouraged women diagnosed with a pelvic mass to take a blood test that can evaluate the risk of ovarian cancer in patients.

Truex has become as much a spokesman at the track as Pollex.

"Martin's going to keep talking about ovaries whether he likes it or not," she said, laughing.

Truex and Pollex, who worked in public relations for a driver, met in the NASCAR garage 11 years ago and have been couple since their first date.

"The biggest thing was when she was first diagnosed with ovarian cancer, we were both like, 'What the hell is that?' That's the scary part," Truex said. "Hopefully, someday in September you'll see everything teal like you do with breast cancer month with all the pink ribbons and you know what it means. Hopefully, someday the teal ribbons will be out there in September."

Hot Wheels toy cars have been modeled after the ones of every Indy 500 race winner and are displayed on a trophy similar to the Borg-Warner. The base of the trophy is wrapped with the Hot Wheels orange track representing the competition that runs through every car.

The trophy will be on display starting May 31 at The Hot Wheels "Race to Win" exhibit at The Children's Museum of Indianapolis.

"My first experience with racing was with Hot Wheels cars, I remember zipping cars down the orange track, and now I watch my two sons do the same," said 2014 Indy 500 champion Ryan Hunter-Reay. "Sharing stories from past races with my kids opens up a conversation about hard work, competition and my passion for racing."

USE THE FORCE: John Force will drive the new 2016 Camaro SS Funny Car this weekend at the NHRA Kansas Nationals, in Topeka, Kansas.

"It's designed to perform better than anything we've had before, with a shape that should help us get down the track quicker and with greater stability," John Force said.