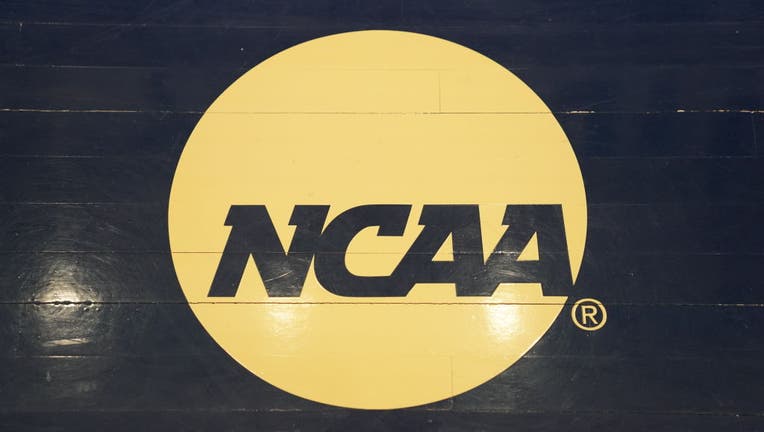 The NCAA logo displayed on a basketball court on March 3, 2020 in Washington, DC. The organization recently expanded its confederate flag policy. (Photo by Mitchell Layton/Getty Images)

Emboldened by the athletes it serves, the NCAA is taking another stand on a social issue.

The NCAA on Friday expanded its policy banning states with prominent Confederate symbols from hosting its sponsored events, one day after the Southeastern Conference made a similar declaration aimed at the Mississippi state flag.

The current NCAA ban, in place since 2001, applies to what the NCAA calls predetermined sites, such as for men’s basketball tournament games.

Mississippi is the only state currently affected by the policy. The expanded ban — supported by all eight public universities in the state — means that even when sites of NCAA events are determined by performance, as they are in baseball, women’s basketball and softball, Mississippi schools will not be permitted to host.

“We must do all we can to ensure that NCAA actions reflect our commitment to inclusion and support all our student-athlete. There can be no place within college sports where any student-athlete is demeaned or unwelcome,” NCAA President Mark Emmert said.

The decision from the NCAA's Board of Governors comes on the heels of two weeks of nationwide protests and rallies against racial injustice and police brutality sparked by the death of George Floyd, a black man who died while being detained by police in Minneapolis.

On campuses from Clemson to UCLA, college athletes have led demonstrations and marches. In some cases they have called for the renaming of buildings and removal of Confederate images.

“They (the NCAA) are following the trail, which is contradictory to leadership,” said Fritz Polite, vice president of opportunity development at Shenandoah University and member of the Drake Group, a college sports watchdog. “Leadership is about influencing and modifying the behavior of others. It's not waiting for the students to be the leaders and then the NCAA to come behind.”

Five years ago, the NCAA took a stand for LGBTQ rights, invoking a similar ban on predetermined sites for its events in states that passed laws aimed at limiting protections for people in those communities. North Carolina's so-called HB2 law led to NCAA men's basketball tournament games being played in Greenville, South Carolina, in 2017 instead of Greensboro, North Carolina.

Only two years earlier, South Carolina had come off the NCAA's banned list for predetermined sites when it removed the Confederate flag from the grounds of the state capitol.

In the latest instance, the leaders of college sports are clearly following the young people who play the games. At schools such as Iowa and Oklahoma State, black football players have called out coaches for racial insensitivity and demanded change.

“Why did the NCAA not take this position years ago?” said Ellen Staurowsky, sports management professor at Drexel University and author of “College Athletes for Hire." “To me it means the NCAA has taken a step, but it certainly does not exempt them from examining deeply the institutional racism that exists in its own industry.”

The entire Roosevelt High School baseball team in Des Moines, Iowa, knelt during the national anthem at the first game of the delayed season, on June 15.

Staurowsky noted as the NCAA and college sports join the fight for racial equality they are simultaneously lobbying Congress for protection for its amateurism rules that prevent athletes — the majority of whom are black in revenue-generating football and basketball — from earning money on the free market.

“To take a stance on the Confederate imagery associated with the Mississippi flag, but not to dismantle amateurism, it speaks to a disingenuousness that should not be supported,” she said.

Mississippi has the last state flag that includes the battle emblem: a red field topped by a blue X with 13 white stars. White supremacists put the symbol on the flag in 1894 during the backlash to black political power that developed during Reconstruction.

The flag has not flown on the campuses of any of the state's eight public universities in years.

On Thursday, the SEC announced it would no longer hold conference-sponsored championship events in Mississippi until the state flag is changed. The move came with calls for change from administrators at both Ole Miss and Mississippi State, but lacked real consequences. None of the SEC's high-profile events are held in Mississippi.

In a joint statement, the presidents and chancellors of Mississippi's public institutions vowed to work to change the state flag.

“In keeping the current state flag, Mississippi will potentially forego the millions of dollars in economic impact that NCAA postseason events bring to our state. This is unfortunate,” they said. “Our student-athletes and coaches, who devote so much of their time, talent, hard work and dedication to their sports and our universities, will potentially be negatively impacted through no action of their own. This is more than unfortunate.”