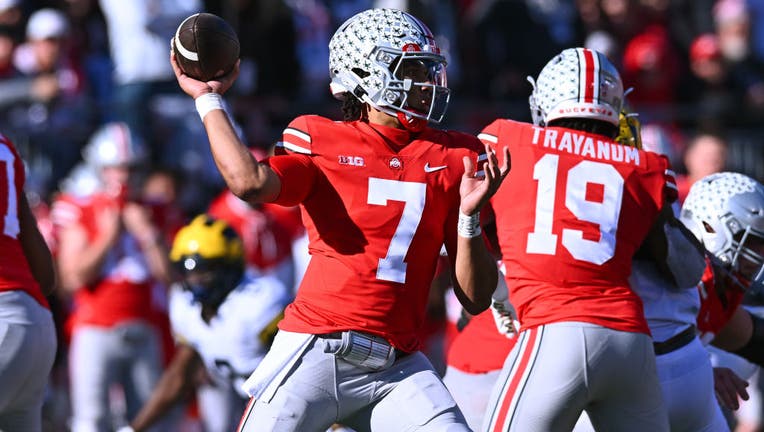 COLUMBUS, OHIO - NOVEMBER 26: C.J. Stroud #7 of the Ohio State Buckeyes throws the ball during the second quarter of a game against the Michigan Wolverines at Ohio Stadium on November 26, 2022 in Columbus, Ohio. (Photo by Ben Jackson/Getty Images)

COLUMBUS, Ohio (AP) - With a potential first-round draft pick at quarterback and a group of elite skill players around him, the window seemed wide open for an Ohio State run to the national title.

But after having its season stymied by Michigan again, and the prospect of losing C.J. Stroud to the NFL draft, the Buckeyes have to be wondering how they move on and what's next?

They still have a chance of backing into the College Football Playoff, and finding redemption. That will require some help from other teams and consideration of the Buckeyes' body of work, not just its 45-23 loss to the No. 3 Wolverines on Saturday.

Otherwise Ohio State is headed for a Rose Bowl appearance and another painful 365 days of trying to figure out how this happened.

"I don’t know what’s next right now, but that’s life at Ohio State," coach Ryan Day said. "I certainly know what this game means to everybody, so when you lose, it all comes back to me. I’m the head coach and that’s what hurts the most."

Stroud sounded like a man who might be moving on if things don't break the Buckeyes way in the next two weeks.

"Honestly, I don't know how I'm feeling right now," the third-year quarterback said. "It all just kind of happened so fast. I don't know if this is my last time playing in the 'Shoe, but I enjoyed every minute of it."

Michigan quarterback J.J. McCarthy had the best game of his career, throwing three long touchdown passes and running for another score. Running back Donovan Edwards, playing in place of the injured Blake Corum, shredded the Ohio State defense for two long second-half touchdown runs that seemed to suck the energy out of Ohio Stadium.

Day was asked if the loss was even worse than last year's 42-27 setback at Ann Arbor, Michigan.

"Hard to say right now. This is not the outcome we all envisioned," he said.

Defensive coordinator Jim Knowles was brought in from Oklahoma State to improve the Ohio State defense after it was embarrassed by Michigan last year.

"You just got to take responsibilities," Knowles said. "Obviously, the players were hurting. Much more than me. I’m crushed. But they’re young men who put their heart and soul into it. They’re the ones that I have to be able to look in the eye and talk about all those things — scheme, technique, fundamentals. Everything that goes into it has to fall on my shoulders."