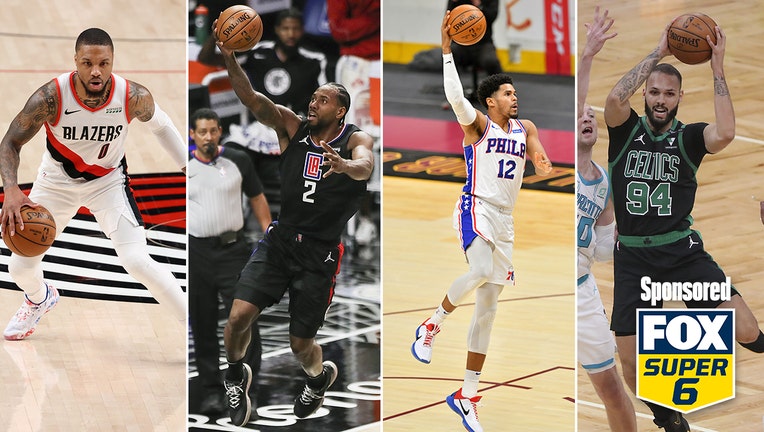 For the past few weeks, the story in the NBA has primarily been the teams jockeying at the top of the standings.

In reality, the battles to watch most closely involve teams toiling in spots six through 12 in the conferences. With the NBA’s new play-in round in place, finishing seventh or eighth means having to win another game at some point in the journey to get into the playoffs, while teams in ninth and 10th still have hope to get in through the league’s newly created backdoor.

Some of those very teams highlight this week's FOX Super 6 contest for Tuesday night in the NBA, in which you could win $25,000 absolutely for free. To play, just download the FOX Super 6 app on your phone or tablet, pick the winner and the margin of victory correctly in all six games, and you could win the jackpot!

Here are the games for Tuesday, as well as some quick thoughts on how each team in each matchup is trending.

If the season ended today, these two teams would be the ninth- and 10th-place squads in the East, matched up in a single-game elimination contest. This is also the final game of the regular season between these two teams, who have split the two previous meetings.

The Bulls snapped a six-game losing streak Sunday with a 115-107 victory over the Brooklyn Nets behind Nikola Vucevic’s 22 points and 13 rebounds. Indiana snapped a three-game skid of its own with a wild 139-133 win over San Antonio in overtime, as Caris Levert led the way with 26 points for the Pacers.

Joel Embiid returned for the 76ers on Saturday in a 122-113 win over the Timberwolves but sat out Sunday’s 116-100 loss to the Grizzlies for maintenance on his left knee. He is expected to play Tuesday, which could bring a much-needed lift since Ben Simmons' scoring has plummeted since the All-Star Game. Simmons has averaged just 12.2 points per game over the past six and has shot only 50 shots in those games.

The Celtics are not going to shed any tears of sympathy, though, as Boston is still languishing at .500 and sitting in eighth in the Eastern Conference. The Celtics did, however, have a rare laugher their last time out: a 116-86 win over Charlotte on Sunday that saw Jayson Tatum go for 22 points and eight rebounds.

Still no LeBron James or Anthony Davis for the Lakers, who might also be without Andre Drummond (questionable with a toe injury). After a 104-86 loss to the Clippers on Sunday, Los Angeles begins a five-game Eastern swing in Tampa with what is the easiest part of the trip.

Meanwhile, the Raptors went into Monday night’s game against the Wizards 1.5 games behind the Bulls for the 10th spot and a ticket to the aforementioned pre-playoff. With Kyle Lowry still on the team, the Raptors have a tremendous amount of championship pride and will give the Lakers all they can handle.

The Nuggets are the team nobody in the West wants to play, as they're starting to get on a roll, standing fourth in the West but only a game behind the Clippers for third and winners of five straight. Nikola Jokic is an MVP candidate, with 26.3 points, 11 rebounds, 8.6 assists and 1.5 steals per game, all team-leading marks.

On the other hand, Jerami Grant and the Pistons are looking toward the next phase of their rebuild.

Giannis Antetokoumpo and the Bucks are keeping pace with the 76ers and Nets in the race for top seed in the East, sitting just 1.5 games back as they continue a six-game road trip to the Western Conference. Jrue Holiday – fresh off a new max contract extension – scored 33 points in a 129-128 squeaker at Sacramento on Saturday and seems to be at the top of his game.

The Warriors are now in the 10th spot in the West, just a half-game up on New Orleans and one game in front of Sacramento. A three-game trip to the Southeast registered as a complete pantsing for Golden State, with losses to Miami, Toronto in Tampa and Atlanta that put the Warriors on the critical list for the playoffs.

Right now, this would be the 3-6 matchup in the West, and it would be an incredible one to watch.

This will be the second meeting of the season between the two teams, as Kawhi Leonard scored 28 points in a 128-105 win on Dec. 30 at Staples. Damian Lillard’s run at a scoring title is in full push, as the Blazers guard is averaging 29.6 points per game – second in the league entering play Monday night.

Both teams are 7-3 in their past 10, and both are gearing up for a serious run in what could be an ultra-competitive Western Conference.