AUSTIN, Texas - Christian Bishop scored 16 points off the bench and No. 2 Texas held Arkansas-Pine Bluff to 13 points in the second half while coasting to an 88-43 win Saturday.

Texas rose to its highest ranking in more than a decade after a 6-0 start before losing in overtime to No. 17 Illinois earlier in the week in New York City, its first game out of its home state. The Longhorns easily overmatched the Golden Lions in their return home.

Freshman Dillon Mitchell scored 13 points for Texas (7-1), most of them coming on dunks. Brock Cunningham scored a career-high 13 on 5-of-5 shooting, which included three 3-pointers. Texas’ top three scorers were 18-of-22 shooting.

Bishop, who transferred from Creighton before last season, passed the 1,000-point mark for his career and now has 1,012. He was a starter for much of last season but has come off the bench in every game this season.

"I’ve been playing basketball for a really long time now," Bishop said. "It’s my fifth year, so if finally happened." 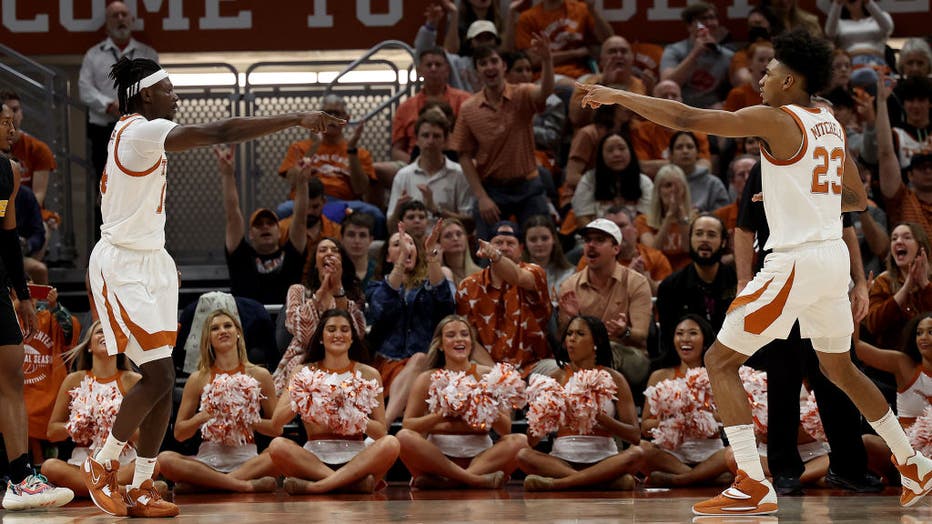 Chris Greene scored 14 for Arkansas-Pine Bluff (3-8), which traded baskets with the Longhorns early on, when the game had nine lead changes in the first six minutes. The Golden Lions got within 21-19 when Trejon Ware swished a 3-pointer.

Texas seized control with a 21-6 run over the final eight minutes of the half that started with a pair of baskets from Bishop, a tomahawk dunk by Mitchell and a 3-pointer from Arterio Morris.

Cunningham, who normally is a defensive stopper off the bench and returned for a final season as a graduate student, had a surprising scoring burst in the first half with 3-pointers.

Texas turned up the defense to start the second half, holding Pine Bluff to a single basket over the first five minutes. Marcus Carr hit a 3-pointer and Dylan Disu’s layup pushed the lead to 56-32.

The Longhorns kept up the pressure defensively, consistently forcing turnovers and fast-break points. The Longhorns scored 24 points off 22 Pine Bluff turnovers. Mitchell’s breakaway dunk off a steal by Carr made it 69-41 with 8 minutes to play.

"We knew it was going to be a tough challenge to score on these guys," Pine Bluff coach Solomon Bozeman said. "Their defense is on a different level."

Arkansas-Pine Bluff: The Golden Lions have almost finished a brutal early season portion of their schedule that included three Big 12 opponents and three more from the Big Ten and the SEC. That gauntlet should have them ready to face their Southwestern Conference schedule that starts in January.

Texas: Mitchell had a highlight-reel game, with 6-of-7 shooting that included five dunks from the 6-foot-8 forward who was one of highest-rated recruits in the country coming out of high school. Troubling, though, is another subpar game from Disu. The starting forward has just seven points and two rebounds in the last two games.

The game was billed as the Jimmy Blacklock Classic in tribute to honor the first Black basketball player recruited at Texas. Blacklock led the Longhorns in scoring in 1970-71 and was team captain the next season when Texas won the Southwest Conference title and advanced to the NCAA Tournament’s Sweet 16. He joined the Harlem Globetrotters in 1974 and played with them until 1987.

Texas can expect to drop in the rankings after the loss to Illinois, but it likely won’t be far. The Longhorns still have an impressive early season resume, with wins over Gonzaga and Creighton. Their best wins have come at home and the Longhorns don’t have to leave the state again until starting Big 12 play on the road at Oklahoma on Dec. 31.