LAWRENCE, Kan. - Bijan Robinson ran for career-highs of 243 yards and four touchdowns, helping Texas earn a bit of revenge against Kansas with a 55-14 victory Saturday that kept alive the Longhorns’ hopes of playing for the Big 12 championship.

The Longhorns (7-4, 5-3), who lost a 57-56 overtime thriller to the Jayhawks a year ago in Austin, need to beat Baylor next weekend while, coincidentally, getting some help from Kansas. The Jayhawks (6-5, 3-5) must also beat Kansas State in their rivalry game for Texas to play fourth-ranked TCU in the title game in Arlington.

Quinn Ewers added 107 yards passing and a touchdown, and Jonathon Brooks ran for 108 yards and two scores, as the Longhorns bounced back from a dismal game against the Horned Frogs in which they didn’t score an offensive touchdown. 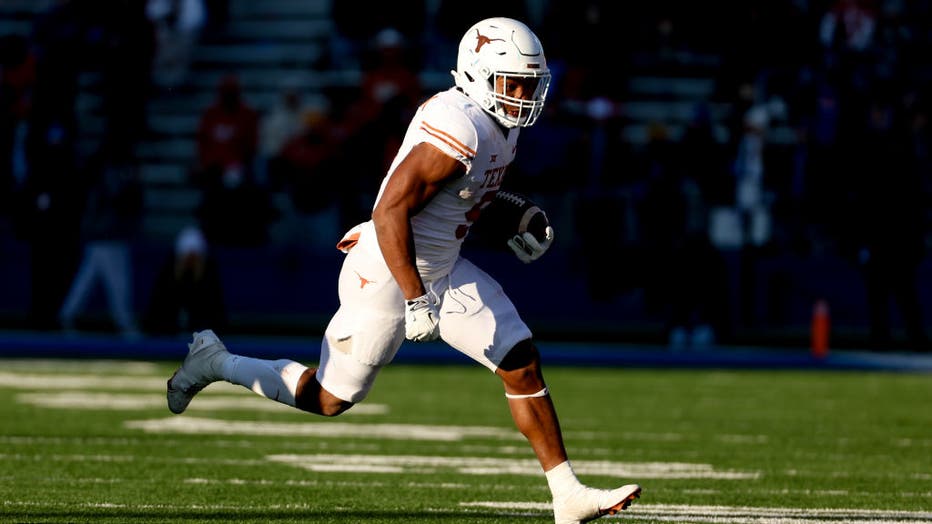 LAWRENCE, KS - NOVEMBER 19: Texas Longhorns running back Bijan Robinson (5) finds running room in the second quarter of a Big 12 college football game between the Texas Longhorns and Kansas Jayhawks on November 19, 2022 at Memorial Stadium in Lawrenc

They scored on nine straight possessions after an opening punt and finished with 427 yards rushing.

The Jayhawks’ Jalon Daniels, starting for the first time since a shoulder injury six weeks ago, threw for 230 yards with two touchdowns and an interception. Devin Neal ran 13 times for 51 yards.

Robinson, who was held to 29 yards rushing by the Horned Frogs, eclipsed that total midway through the first quarter Saturday, then kept on going. He bulldozed into the end zone from 2-yards out to give the Longhorns the lead, then ripped off two long runs on their next possession to extend the advantage to 14-0.

The Jayhawks were hoping to get a boost from the return of Daniels, who had them off to a 5-0 start before his injury on Oct. 8. But they went 3-and-out on their first two drives, failed on fourth-and-2 on the next one, then had a TD wiped out by a penalty and watched Jacob Borcila miss the ensuing field-goal try.

Ewers added a touchdown pass to Keilan Robinson later in the second quarter. And after Daniels was picked off by Jaylan Ford, the Longhorns turned again to Robinson, who appeared to have scurried 25 yards for a touchdown but was ruled out at the 1-yard line with 1 second left in the half — then leapt over the pile on the next play anyway.

Robinson had 172 yards and three touchdowns as Texas took a 31-0 lead to the locker room.

The junior tailback scored from 32 yards out on the first possession of the second half for his first career four-touchdown day, and Longhorns coach Steve Sarkisian soon gave Robinson the rest of the night off.

But despite playing just 2 1/2 quarters, his big game against the Jayhawks sent him climbing through the school record book. Robinson tied Chris Gilbert for fifth in career rushing with 3,231 yards, and Robinson’s 39 career scores is tied with Jamaal Charles and Roy Williams for fourth in school history.

It was senior day at Kansas, where the Jayhawks bid farewell to a senior class that included several players who endured multiple coaching changes. That included defensive tackle Sam Burt, who played two seasons for David Beaty, two more for Les Miles and the past two seasons for Lance Leipold.

The Longhorns face the Bears next Saturday. The Jayhawks head down Interstate 70 to play the Wildcats.