AUSTIN, Texas - Bijan Robinson ran for 183 yards and three touchdowns, Jahdae Barron returned an interception 44 yards for a score in the third quarter and No. 21 Texas beat UTSA 41-20 on Saturday night.

Texas trailed 17-7 in the second quarter then rallied to tie it by halftime. Robinson’s 78-yard touchdown run gave Texas the lead, and Barron’s interception return put the Longhorns up by 11 to snuff the Roadrunners’ bid for an upset that would have been the biggest win in the history of a rising program that has only been playing football since 2011.

"I don’t think our team blinked for a second," Texas coach Steve Sarkisian said. "We battled through the early start woes."

Hudson Card got the start at quarterback for Texas (2-1) in place of the injured Quinn Ewers. Card had his own struggles with an ankle sprain during the week and wasn’t announced as the starter until game time. He still finished with 161 yards passing and even scampered for a 32-yard run in the fourth quarter. 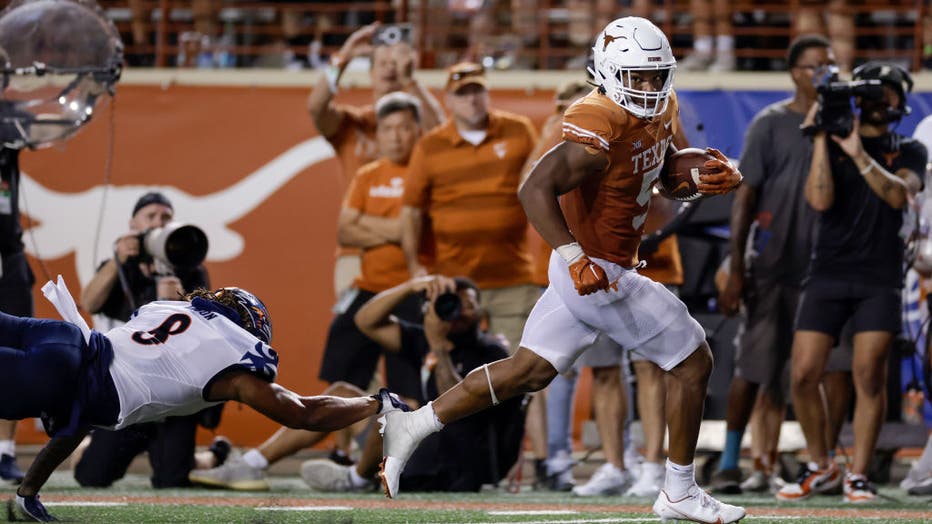 AUSTIN, TEXAS - SEPTEMBER 17: Bijan Robinson #5 of the Texas Longhorns rushes for a touchdown in the fourth quarter against the UTSA Roadrunners at Darrell K Royal-Texas Memorial Stadium on September 17, 2022 in Austin, Texas. (Photo by Tim Warner/Ge

"I was just kind of doing treatment all week," Card said. "I had a pretty good feeling I was going to play."

Texas jumped into the national rankings on the strength of its close loss a week earlier to then-No. 1 Alabama, but found itself quickly down by 10 as UTSA (1-2) followed a surprise onside kick with a trick play touchdown pass to Zakhari Franklin.

Texas eventually wore down the Roadrunners, last season’s C-USA champions behind a rushing attack that rolled up 298 yards. Robinson put the game out of reach with a 41-yard touchdown run with 9:36 left that made it 38-20. Roschon Johnson added 81 yards rushing and scored Texas’ first touchdown.

"We have to carry the team right now," Robinson said.

UTSA: Quarterback Frank Harris was frustrating Texas with his ability to elude a steady pass rush, find the creases in coverage and keep the drives moving with his legs. Then one misfired pass swung the game when Harris floated a short pass that was tipped right to Barron who had an open field for the interception return. Harris finished with 222 yards passing and 38 rushing.

The interception, key penalties that extended Texas drives and a late fourth-down drop were all "self-inflicted mistakes" the Roadrunners couldn’t overcome, he said.

"All those things were things we had control of," Harris said. "We’ll grow from this."

Texas: Even when the Longhorns have questions at quarterback, having Robinson to rely on can deliver a lot of answers. He won’t often have easy going behind an offensive line that starts two freshmen. But his ability to squirt through tight spaces, spin and launch into breakaway speed make him a constant threat.

"We needed to run the ball, clearly we had a bit of a quarterback situation going on. Sometimes when you run the ball, it doesn’t happen right away. Over time it starts to break," Sarkisian said. "Right before the first play of the second half ... I just told him to run through these guys, enough with the dancing."

A solid, steady win with a backup quarterback and big plays from its best players put Texas in position to keep climbing. It’s just a matter of how far as the Longhorns get ready to start Big 12 play.

Sarkisian said he’ll appeal to the Big 12 a targeting penalty that got linebacker DeMarvion Overshown ejected early in the fourth quarter with a facemask-to-facemask hit on Harris. Sarkisians said he was told the quarterback was deemed a defenseless player. If the targeting isn’t overturned, Overshown will miss the first half of Texas’ next game.

Several days before the game, UTSA released a pregame hype video that featured a Roadrunners player on the Texas campus, most notably spinning a football in the shadow of the iconic clock tower. It was noticed by the Longhorns.

"We didn’t really care," Robinson said. "We understand they wanted to try to get in our heads."