It’s already week 12 of the MLS season, and while we’re only a month into the next phase of this stop-start campaign, after Wednesday night every team will have played ten games or more, and by the weekend most will have completed half of the games they’re expected to play before the playoffs get underway in November. So, with practice and recovery days at a premium, the pressure remains on players up and down the roster to deliver night after night.

Our FS1 game this week is on Wednesday night between a pair of teams looking for some traction right now after impressing at the MLS Is Back Tournament in the summer: San Jose surprised just about everybody by making the quarterfinals, the Timbers were slightly less surprising winners, but both teams have combined for one win in their ten total games since returning from The Bubble.

The issue for the Quakes right now is defense: including the loss that sent them home from MLS Is Back, they’ve allowed 20 goals in six games, including a club record 7-1 loss in Seattle last week. But with MLS career scoring leader Chris Wondolowski, and a stronger performance last time out in a 0-0 draw with the Galaxy, they can’t be overlooked. The Timbers lost MLS Is Back MVP Sebastian Blanco to a torn ACL two weeks ago, but star Diego Valeri recently became the third player in league history to reach 80 career goals and 80 career assists.

These two teams have been facing off in one form or another since 1975, and they’ll get plenty acquainted this week: Wednesday’s game is rescheduled from the postponed games a few weeks back as part of a social justice protest led by the league’s Black Players for Change, and the schedule sees the Timbers come right back to San Jose for another game on Saturday.

What’s quickly become one of the league’s marquee matchups was a wipeout for LAFC last month, a 3-1 loss in Seattle that formed part of a stunning four-losses-in-five run to begin the re-started season; while Carlos Vela’s injury plays a big role, we’re just not used to seeing LAFC struggle like that, and they looked themselves again Sunday night in a 4-2 win vs Portland.

The Sounders looked to be on a roll in recent weeks before dropping a home game against the Timbers, but took out their frustration from that game on their next opponent: a club record 7-1 win over San Jose, which saw them set an MLS record by being 4-0 up after only 33 minutes. Now with a full week of rest they’re ready to welcome LAFC once again.

This is the third meeting in the last two-and-a-half weeks between these Southeastern neighbors—by design, as MLS tries to limit travel due to COVID safety protocols—and surprisingly enough it’s the expansion team, not the mighty trophy-winners of recent years, who have had the better results: Miami beat Atlanta 2-1 at home last week after grinding out a scoreless draw in their first meeting, and with FIFA World Cup-winner Blaise Matuidi on the field, and superstar scorer Gonzalo Higuain set to join as well, they’re starting to come into their own.

Atlanta, meanwhile, are going in the other direction: winless in five games, recently selling star Pity Martinez, and with players talking a lot recently about “mentality” and “confidence”, two things we never questioned about this team their first three years. Can the rubber match against Miami provide a desperately-needed spark? 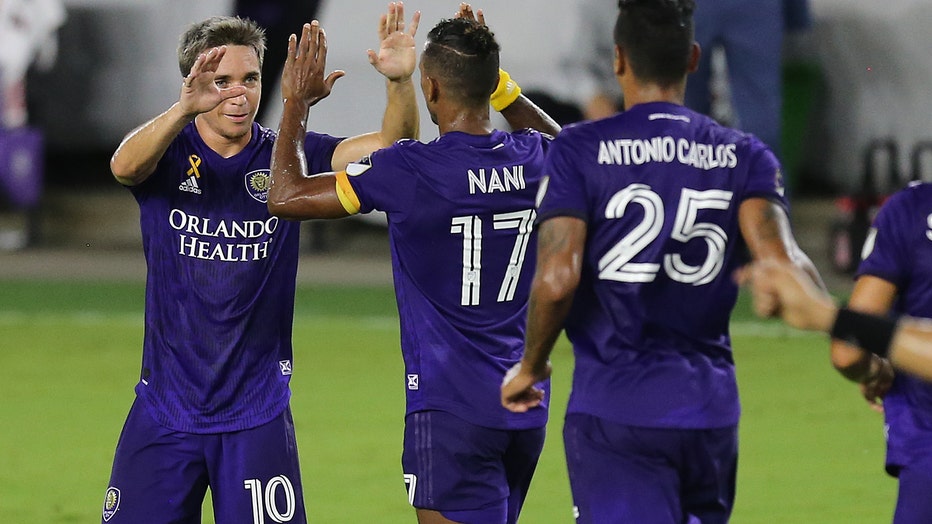 Orlando shocked everyone by making the final of the MLS Is Back Tournament on almost-home-soil and have continued their quest for a first ever playoff berth with three wins since the season restarted.

Orlando shocked everyone by making the final of the MLS Is Back Tournament on almost-home-soil and have continued their quest for a first ever playoff berth with three wins since the season restarted; as many wins as they had the final three months of last season. And they’re getting contributions from all over the field, taking the pressure off attacking star Nani to do all the work himself.

The Fire came into this season with hope for a turnaround of their own: a new owner, coach, logo, and a return to playing home games at Soldier Field. The start-stop nature of the year hasn’t helped build continuity with all that change, but last weekend they scored as many goals against league-leading Columbus as the Crew had allowed in their first ten games COMBINED, so they bring momentum into their trip to Central Florida.