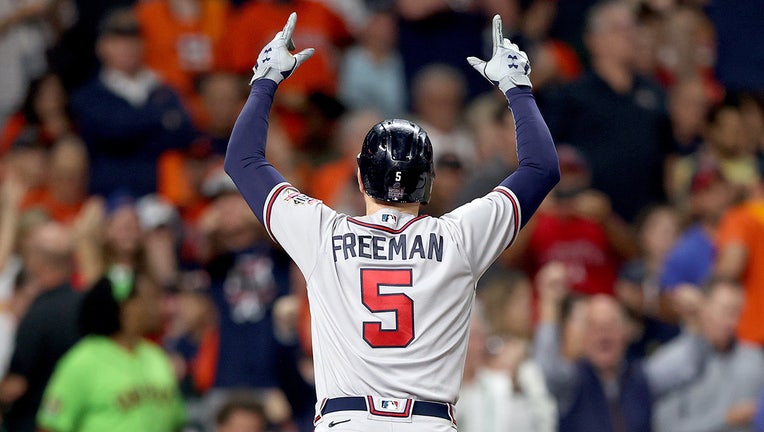 Freddie Freeman of the Atlanta Braves celebrates after hitting a solo home run against the Houston Astros during the seventh inning in Game Six of the World Series at Minute Maid Park on November 02, 2021 in Houston, Texas. (Photo by Elsa/Getty Image

Three long months of nothing, at least for fans used to filling their winters with updates off the hot stove.

That's about to change, and fast. Players voted Thursday to halt the sport's lockout and agree to terms with Major League Baseball on a new collective bargaining agreement. That ended a 99-day work stoppage and an accompanying roster freeze that left Carlos Correa and Freddie Freeman among the 138 big league free agents in limbo.

It's hard to imagine anything can compete with the last-minute splurge by clubs before the lockout, when they committed a record $1.4 billion in a single day.

But with Kris Bryant and Clayton Kershaw among those still without a home for 2022 and beyond, expect another big buzz when MLB formally lifts its freeze on transactions as soon as Thursday night.

Here’s what to look for when that happens:

A star quintet of shortstops headlined this year's free agent class, but three of them came off the board before the work stoppage: Seager and Semien went to the Texas Rangers, and Javier Báez signed with the Detroit Tigers.

Correa and Trevor Story remain, with Andrelton Simmons also available for suitors who might miss out.

Correa, the 2015 AL Rookie of the Year and a two-time All-Star, was considered the top player on the market entering the offseason and is certain to get the biggest deal of the players left this spring. The 27-year-old batted .279 with 26 homers, 92 RBIs and an .850 OPS for Houston in 2021, perhaps shaking some concerns about his durability by playing 148 games — his first time with at least 111 since 2016. 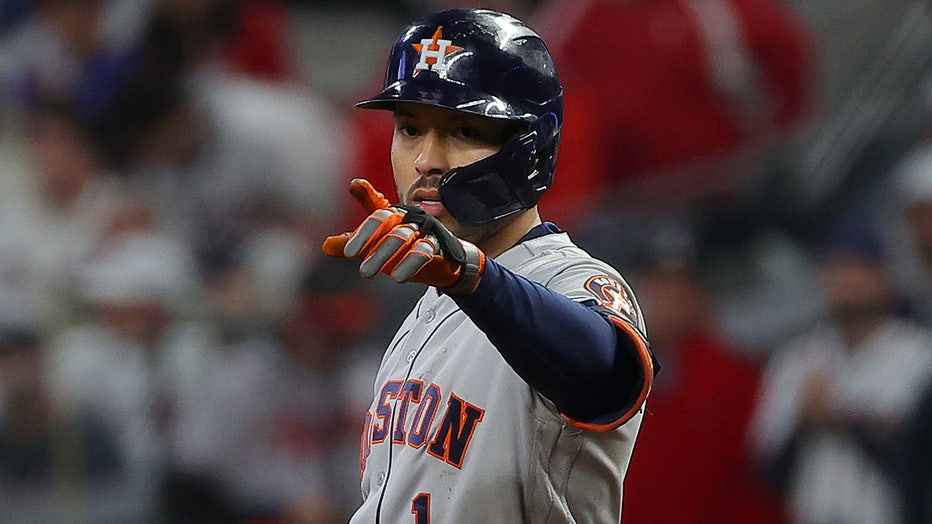 Carlos Correa of the Houston Astros reacts after hitting a single against the Atlanta Braves during the fifth inning in Game Five of the World Series at Truist Park on October 31, 2021 in Atlanta, Georgia. (Photo by Kevin C. Cox/Getty Images)

Two targets loom for Correa — Seager’s $325 million, 10-year deal was the biggest signed this offseason, and Francisco Lindor’s $341 million, 10-year contract with the Mets is the record payday for a shortstop.

Correa is looking for a deep-pocketed team in need of infield help. Conveniently, the Yankees top the list of clubs without a shortstop.

New York general manager Brian Cashman has heaped praise on Correa, saying in November that negative fan reaction tied to Houston's sign-stealing scandal was "not going to enter my calculus" and that Correa was "clearly not afraid."

The 29-year-old Story has played six stellar seasons with the Colorado Rockies and hit .251 with 24 homers and 75 RBIs in 2021, surprisingly remaining in Denver all season instead of being traded to a contender. He could get something similar to Báez’s $140 million, six-year deal with Detroit.

Simmons won the last of his four Gold Gloves in 2018 and batted just .223 with three homers for Minnesota last year.

Freeman remains a free agent despite his apparently tight ties with the World Series champion Braves. The 2020 MVP is coming off another All-Star season, hitting .300 with 31 homers, 83 RBIs and an .896 OPS.

Drafted by Atlanta in 2007, the 32-year-old seems like a prime candidate to follow friend and mentor Chipper Jones in being a lifelong Brave. If that doesn’t happen, it's not hard to picture nearly every big-market team trying to take a run at him.

The National League will permanently adopt the designated hitter as part of the new CBA, and several players stand to benefit from waiting until that change was official to sign.

Nick Castellanos should get the biggest payday of the group. The 29-year-old hit .309 with 34 homers and 100 RBIs for Cincinnati in 2021, but his outfield defense is just OK. Kyle Schwarber, who hit 32 homers for Washington and Boston last year, has a similar profile.

Japanese outfielder Seiya Suzuki was posted by NPB’s Hiroshima Toya Carp on Nov. 22, and his 30-day window to sign with a major league team was paused by the shutdown. He’ll have 20 days to find a deal. Agent Joel Wolfe told Japanese media in November that between eight and 15 teams had expressed interest.

Home on the range

A three-time Cy Young Award winner, Kershaw hasn't committed to a reunion with the Los Angeles Dodgers — where he's spent his entire career — and there's speculation he could try to stay closer to his Dallas home by joining the Rangers. The Dodgers did not extend a qualifying offer to the 33-year-old as a courtesy, meaning Texas would not have to sacrifice a draft pick to sign the ace left-hander.

Best of the best

Bryant could fit onto nearly any roster because of his versatility — he played more games in the outfield than at third base for the first time last season, including 19 appearances in center. ... LHP Carlos Rodón didn’t get a qualifying offer from the White Sox despite finishing fifth in AL Cy Young voting in 2021.. ... Other names of note: OF Michael Conforto, 1B Anthony Rizzo, RHP Kenley Jansen, OF and NLCS MVP Eddie Rosario.