The U.S. National Hurricane Center in Miami said late Wednesday that Delta is expected to become a major hurricane again, like it was days earlier before hitting Mexico's Yucatan Peninsula. But some weakening is forecast once Delta approaches the northern Gulf Coast on Friday.

As of 10 p.m. CDT Wednesday, Delta was about 525 miles (845 kilometers) south-southeast of Cameron, Louisiana and headed to the west-northwest at 17 mph (28 kph). The hurricane has top sustained winds of 90 mph (150 kph). It gained new strength in recent hours after entering the southern Gulf of Mexico.

The Republican governor planned a press briefing for Thursday afternoon with the Mississippi Emergency Management Agency to detail more about the state’s response to the storm.

“Watch the weather reports and get prepared. We are tracking this closely and operators are getting ready for action,” Reeves said in a statement. “Prep for the worst. Pray for the best. God bless and stay safe.”

Hurricane Delta is expected to make landfall along the Louisiana coast later in the week. However, the Southern part of Mississippi could see heavy rain, flash flooding and other adverse weather effects. 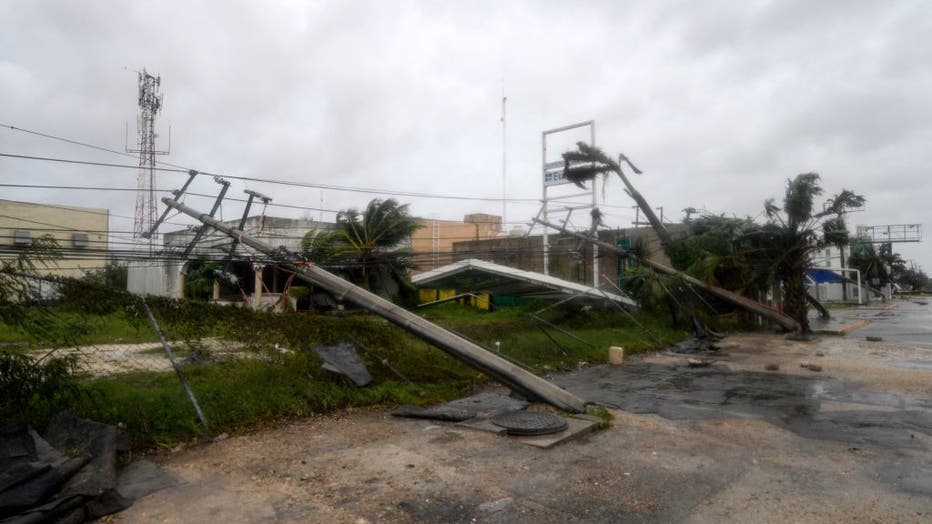 Hurricane Delta slammed into Mexico's Caribbean coast early Wednesday, toppling trees, ripping down power lines and lashing a string of major beach resorts with winds of up to 110 miles (175 kilometers) per hour. ) (Photo by PEDRO PARDO/AFP via Getty

Hurricane Delta is strengthening again as it moves over the southern Gulf of Mexico away from Mexico's Yucatan Peninsula.

The National Hurricane Center in Miami said Delta now has top sustained winds of 90 mph (150 kph) and is about 550 miles (890 kilometers) south-southeast of Cameron, Louisiana. It says forecast models predict it is likely to regain the major hurricane status it had earlier in the week.

A 7 p.m. CDT advisory said Delta's new strength is increasing the likelihood of a life-threatening storm surge and damage winds along the northern U.S. Gulf coast starting Friday. The storm is currently moving toward the northwest at 17 mph (28 kph).

Forecasters say Delta is expected to grow in size as it approaches the northern Gulf Coast, where life-threatening storm surge and dangerous hurricane-force winds are likely starting Friday, especially for parts of the Louisiana coast.

Louisiana Gov. John Bel Edwards says he’s spoken with President Trump ahead of Hurricane Delta and the president has agreed to sign a federal emergency declaration for the state in advance of the storm.

Edwards urged his state’s residents to complete their preparations for Delta and settle in the place they will hunker down for the storm by the end of Thursday.

The Democratic governor says the fast-moving Delta is not expected to stick around long enough in his state to drop tremendous amounts of rain. But he cautioned that the storm’s speed means Delta will remain a hurricane as it travels across the state well beyond coastal areas, including in central and north Louisiana.

Edwards doesn’t expect the state to call for any mandatory evacuations, though locals have done so in areas outside of levee protections.

The state’s corrections department is helping to evacuate local prisoners in coastal regions further to the north.

WASHINGTON — President Donald Trump says he has spoken with the governors of Texas and Louisiana about Hurricane Delta and says that residents should heed the directions of state and local officials.

The storm is expected to hit the Louisiana coast Friday night or Saturday morning. It’s the 25th named storm of the Atlantic’s unprecedented hurricane season.

Trump says he was briefed on the storm and tweets: “please be prepared, be careful, and be safe!”

Louisiana is still recovering from Hurricane Laura, which ravaged the southwestern region as it roared ashore as a Category 4 storm in August.

NEW ORLEANS — New Orleans' mayor has urged the city’s residents to remain vigilant as the expected path of Hurricane Delta is predicted to hit the state’s coast Friday night or Saturday morning.

“It was a monster before it hit the Yucatan,” Arnold said of Delta. “And, we are on the east side of this, slightly out of the cone, but be careful. It could go either way, left or right.”

City officials said residents should expect anywhere from 4 to 8 inches of rain over the entire event.

Meanwhile, officials said about 5,600 people evacuated from southwestern Louisiana after Hurricane Laura remain in New Orleans, down from a high of 12,000.

Arnold urged those evacuees who are considering driving back to their homes to be very careful and avoid doing so on Friday “when this thing starts coming ashore.

Edwards says state and local officials in coastal areas are shoring up levees, sandbagging and taking other protections measures.

Louisiana is still recovering from Hurricane Laura, which ravaged the southwestern region as it roared ashore as a Category 4 storm in August. More than 6,600 Laura evacuees remain in hotels around the state, mainly in New Orleans, because their homes are too heavily damaged to return.

The Democratic governor has requested a pre-landfall federal emergency declaration in a letter to President Donald Trump.

“Hurricane Delta is a dangerous storm that will bring strong winds, heavy rain, life-threatening storm surge and flooding to coastal Louisiana, and I am hopeful President Trump will quickly approve my request for a federal emergency declaration,” Edwards said in a statement. “All Louisianans should use today to prepare for Hurricane Delta, heeding the direction of their local leaders when it comes to evacuations.”

NEW ORLEANS — The U.S. Coast Guard has been staging its rescue boats and aircraft ahead of Hurricane Delta's expected landfall so they are prepared for searches and rescues, authorities said Wednesday.

“We are prepared, we’re ready, we understand what we need to do and how we need to do it,” said Capt. Will Watson, commander of Coast Guard Sector New Orleans.

“But I’d be lying to you if I said that we didn’t recognize that this is an extremely busy season,” he said. “I don’t think we’ve had a season like since maybe 2005.”

Given the frequency of storms striking the region this year, Watson acknowledged that there is “some fatigue” among Coast Guard members, but planning and bringing in resources from other areas is one way of dealing with that, he said.

CANCUN, Mexico — Mexico civil defense official Luís Alberto Vázquez said there were no immediate reports of deaths or injuries, but Hurricane Delta had toppled about 95 trees and knocked out electricity to parts of Cancun and Cozumel. Ortega said about 39,000 people had been evacuated in the states of Quintana Roo and Yucatan, and that about 2,700 people had taken refuge in storm shelters in the two states.

Early Wednesday, guests of the Fiesta Americana Condesa hotel awoke in the sweltering classrooms of the Technological Institute of Cancun campus where they had been moved Tuesday.

All of the windows had been covered with plywood so they couldn’t see what was happening, but they said the howling winds started around 2 a.m. and there had been heavy rain. The power — and with it the air conditioning — had been knocked out early Wednesday so it was steamy as tourists used their cell phone light to get up and make their way for a first cup of coffee.

CANCUN, Mexico — Hurricane Delta made landfall in Mexico’s Yucatan Peninsula on Wednesday as an extremely dangerous Category 2 storm, roaring ashore between Cancun and the resorts of Playa del Carmen and Cozumel.

Quintana Roo Gov. Carlos Joaquín warned residents and tourists that “it is a strong, powerful hurricane.” He considered it a good sign that Delta had weakened a bit late Tuesday, but said the area hadn’t seen a storm like it since Hurricane Wilma in 2005.