A long-duration lake-effect snowstorm is expected to bury parts of western and northern New York, including the cities of Buffalo and Watertown, in up to 4 feet of snow into this weekend.

Bands of heavy snow are underway off lakes Erie and Ontario and are expected to continue through at least Sunday, when the Buffalo Bills are scheduled to host the Cleveland Browns at Highmark Stadium in the Buffalo Southtowns.

WHAT IS LAKE-EFFECT SNOW?

"It's going to be a long-lived event, probably 36 hours of moderate to heavy snows across a population of over a million people, so it is a big event by all means," FOX Weather Winter Storm Specialist Tom Niziol said.

Lake-Effect Snow Warnings have been issued on the east and northeast sides of lakes Erie and Ontario, including the cities of Buffalo, Niagara Falls, Watertown and Oswego in New York, Erie in Pennsylvania and Ashtabula in Ohio. 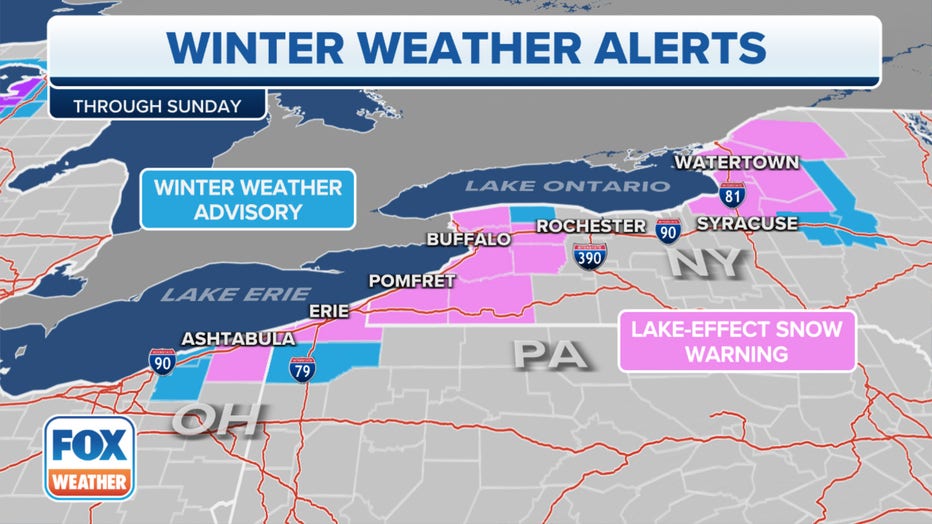 Lake-Effect Snow Warnings have been issued on the east and northeast sides of lakes Erie and Ontario.

New York Gov. Kathy Hochul declared a state of emergency for the Buffalo and Watertown areas because of the expected feet of snow. Beginning at 4 p.m. EST Thursday, all commercial traffic will be banned along a 132-mile stretch of the New York State Thruway (Interstate 90) from Rochester, New York, to the Pennsylvania border.

On Thursday, bands of lake-effect snow will drop 1 to 2 inches of snow per hour east of Lake Erie to the south of Buffalo and east of Lake Ontario to the north of Syracuse.

Thundersnow has even been reported in the heaviest snow bands within about 15 miles of both lakeshores.

THUNDERSNOW: WHAT CAUSES LIGHTNING AND THUNDER DURING A SNOWSTORM?

The lake-effect snow bands are forecast to shift north and intensify Thursday night when they will begin to set up over the Buffalo and Watertown metro areas, where they will persist for an extended period of time.

Snowfall rates in these bands have the potential to reach 2 to 3 inches per hour, which means additional snowfall amounts of well over a foot are likely by daybreak Friday in areas that see the most persistent snow. Thundersnow is also possible in the heaviest snow bands Thursday night and Friday.

WHY SNOWFALL RATE IS IMPORTANT TO UNDERSTANDING WINTER WEATHER

The intense snow bands on the northeast ends of lakes Erie and Ontario are not expected to oscillate much through at least Friday evening. They may remain directly over the Buffalo and Watertown metro areas during what the National Weather Service called a "potential high-impact, long-duration lake snow event."

Snow could pile up at the rate of 3 inches or more per hour during the day Friday, including in downtown Buffalo and over toward the airport just east of the city limits. 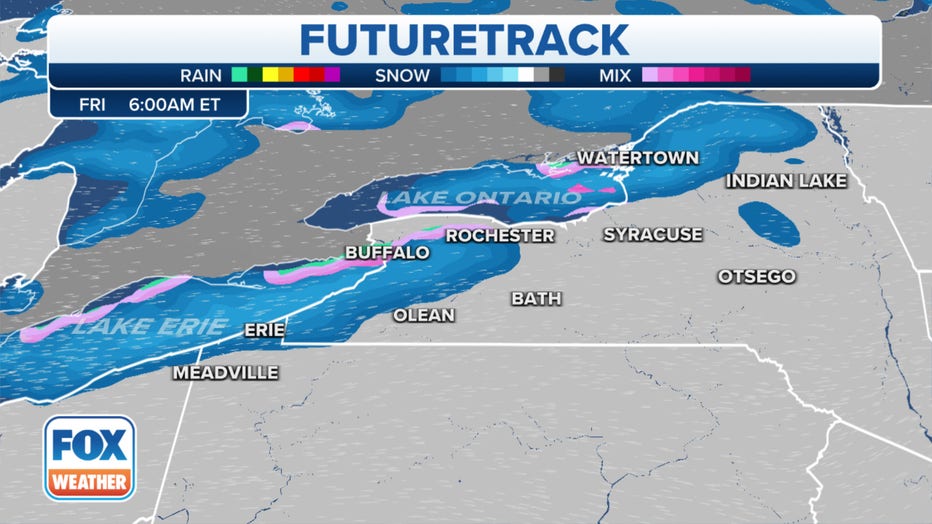 This weekend, both lake-effect snow bands will begin to oscillate, bringing bursts of heavy snow into areas north of Buffalo and Watertown on Saturday and south of those cities on Sunday.

How much snow will fall?

The FOX Forecast Center said the highest snowfall totals will likely be centered directly over the Buffalo and Watertown metro areas because of the nearly stationary snow bands from Thursday night through Friday evening.

Between 2 and 4 feet of total snow is expected to pile up in Buffalo by Sunday, fueled by snowfall rates of 3 inches or more per hour in the heaviest lake-effect bands.

"These bands may only be 15 miles wide, so take a look at the gradient – the difference in snowfall from the center of Buffalo to about 20 miles on either side of that – it's like going through two different worlds when you drive through something like this," Niziol explained. 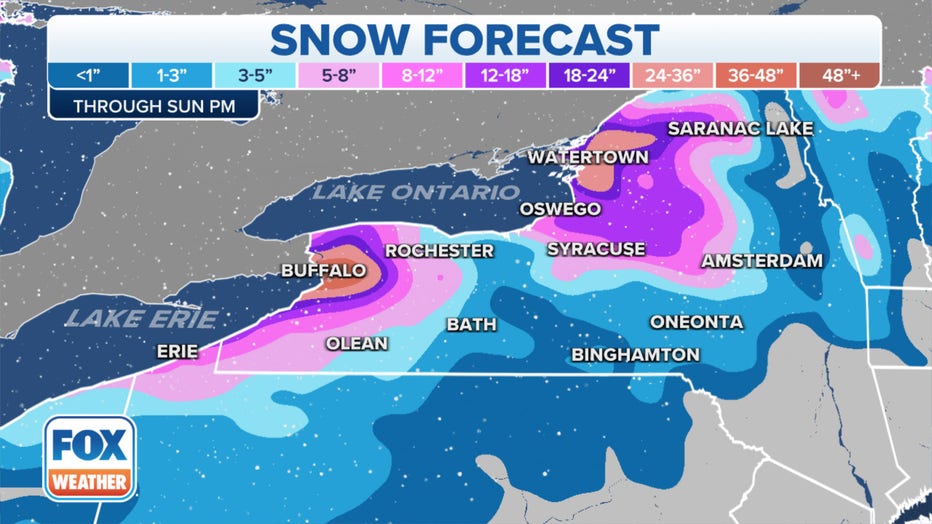 A foot or more of total snow is also forecast in many other areas east and northeast of lakes Erie and Ontario that will see bursts of heavy snowfall.

"Snowfall totals are really going to be exceptional here," Niziol said. "In fact, off of Lake Erie, as much as 4 feet over the most heavily populated area of western New York state. And Lake Ontario not far behind – up toward Watertown, 2 to 3 feet there as well." 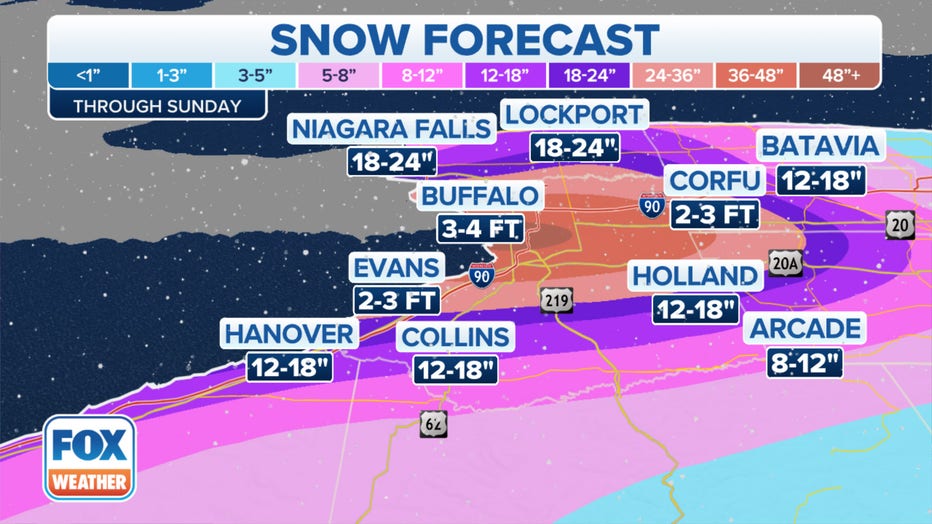 This potentially paralyzing lake-effect snowstorm will rank on the highest possible scale of the Winter Storm Severity Index (WSSI) in the Buffalo metro area, which means extreme impacts are expected. 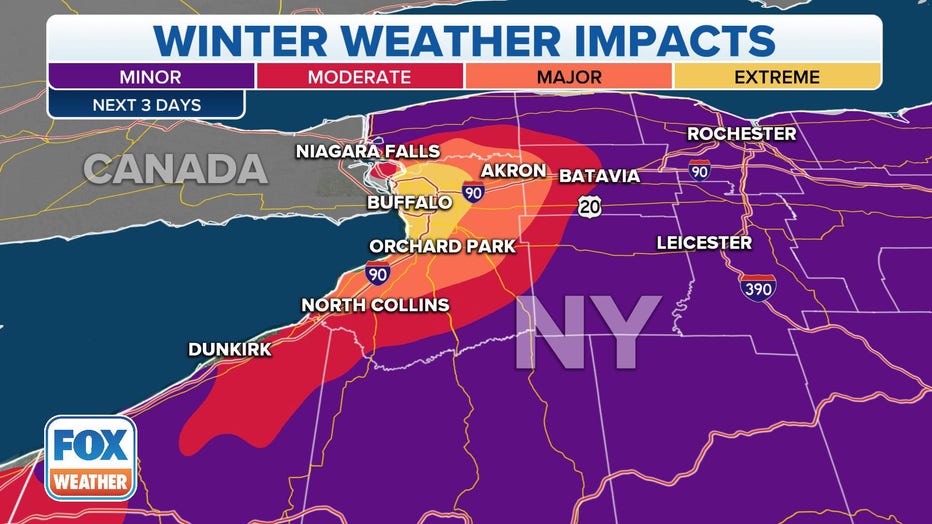 Buffalo's heaviest three-day snowstorm on record dumped a whopping 56.1 inches of snow in 2001.

While that all-time record is expected to remain safe, this event will likely become one of the city's top-10-heaviest snowstorms.

How does lake-effect snow form?

As that cold air passes over the lakes, warmth and moisture from the water are picked up and transferred into the lowest portion of the Earth’s atmosphere. This rising air condenses into clouds, which can grow into narrow bands that are capable of producing snowfall rates as high as 2 to 3 inches per hour or more, according to the NWS. 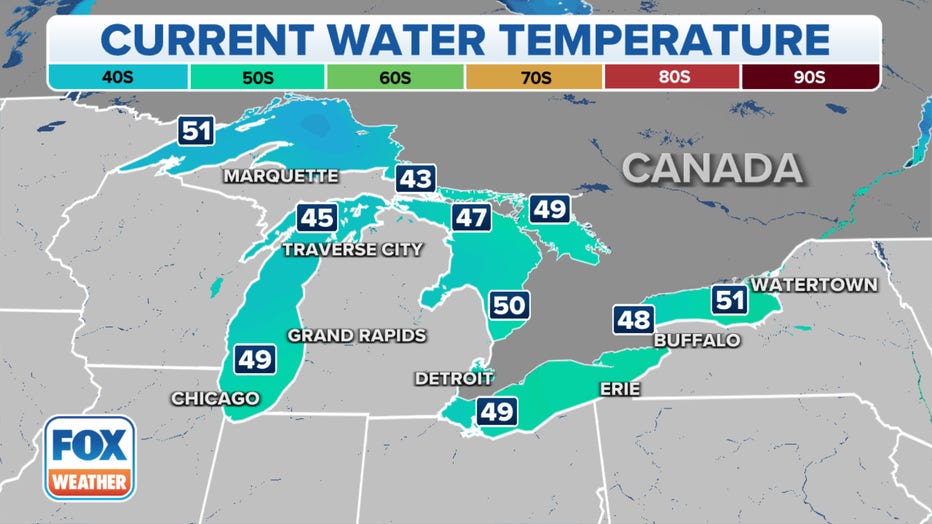 The temperatures of lakes Erie and Ontario currently range from the upper 40s to the lower 50s – much warmer than the temperatures in the 20s and 30s that are expected in western and northern New York during this lake-effect snowstorm.

This large temperature difference will create intense bands of snow off lakes Erie and Ontario through this weekend.

The Buffalo NWS office noted the weather pattern that will aid in producing this lake-effect snow event shares similarities with the historic November 2014 lake-effect storm that was dubbed "Snowvember."

More than 5 feet of snow crippled the Buffalo Southtowns, with South Cheektowaga tallying the most snowfall at 65 inches in just two days between Nov. 17-19, 2014.

Hundreds of roof collapses and structural failures were reported, thousands of drivers were stranded, and there were scattered food and gas shortages due to impassable roads. Numerous trees also fell due to the weight of the snow, causing isolated power outages where trees were toppled onto power lines.

MEDICAL EXPERTS WARN SHOVELING SNOW CAN BE DANGEROUS TO YOUR HEALTH

A 132-mile stretch of the New York State Thruway was shut down for several days from Rochester, New York, to the Pennsylvania border. Other major routes, including Interstate 190, Interstate 290 and State Route 400, were also closed.

According to the NWS, this paralyzing lake-effect snowstorm was blamed for 14 deaths.

Buffalo is the 4th-snowiest city in the US 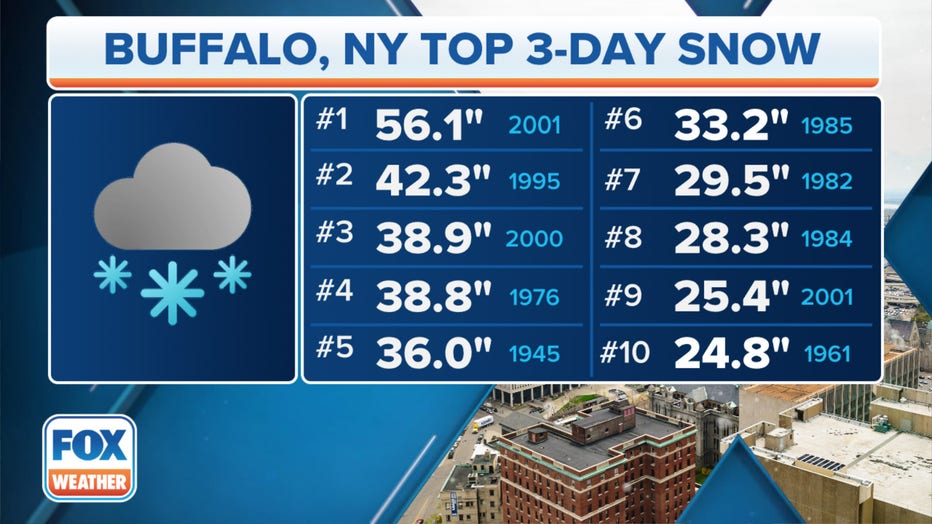 When looking at U.S. cities with a population of at least 50,000 residents, Buffalo ranks as the fourth snowiest in the nation. It averages 95.4 inches of snow each winter – just shy of 8 feet.

THESE ARE THE 7 SNOWIEST CITIES IN THE U.S.

Buffalo is the second-largest city in New York state, behind only New York City at the opposite end of the Empire State. It's located at the eastern end of Lake Erie, placing it in a prime spot for lake-effect snow off this Great Lake.

However, Buffalo does not typically receive as much snow as two other cities to its east, Rochester and Syracuse.

LINK: GET UPDATES ON THIS STORY AT FOXWEATHER.COM