PENSACOLA, Fla. (AP) - Sally lumbered ashore near the Florida-Alabama line Wednesday with 105 mph (165 kph) winds and rain measured in feet, not inches, swamping homes and trapping people in high water as it pushed inland for what could be a slow and disastrous drenching across the Deep South.

Moving at an agonizing 3 mph, or about as fast as a person can walk, the storm made landfall at 4:45 a.m. close to Gulf Shores, Alabama, about 30 miles from Pensacola. It accelerated to a light jog as it battered the Pensacola and Mobile, Alabama, metropolitan areas encompassing nearly 1 million people.

It cast boats onto land or sank them at the dock, flattened palm trees, peeled away roofs, blew down signs and knocked out power to more than a half-million homes and businesses. A replica of Christopher Columbus’ ship the Nina was missing from the Pensacola waterfront, police said.

Hurricane Sally brought wild winds and rain to the Gulf Coast of Florida and Alabama overnight September 15 into September 16, making landfall as a Category 2 storm.

Alththough Sally has since been downgraded to a tropical storm, the National Hurricane Center warned of "catastrophic and life-threatening flooding occurring over portions ot he Florida panhandle and southern Alabama."

Video uploaded to Instagram shows massive flooding in Pensacola, where the National Weather Service reported 24.83 inches of rain as of 12 p.m. Wednesday.

Storm surge and rain From Hurricane Sally flood in Pensacola

Hurricane Sally brought wild winds and rain to the Gulf Coast of Florida and Alabama overnight September 15 into September 16, making landfall as a Category 2 storm.

Crews and first responders in high water vehicles rescued hundreds of people stranded in floodwater and storm surge across Alabama and Florida.

Sally tore loose a barge-mounted construction crane, when then smashed into the new Three Mile Bridge over Pensacola Bay, causing a section of the year-old span to collapse, authorities said. The storm also ripped away a large section of a newly renovated fishing pier at Alabama’s Gulf State Park.

Emergency crews plucked people from numerous flooded homes. In Escambia County, which includes Pensacola, more than 40 were rescued within a single hour, including a family of four found in a tree, Sheriff David Morgan said.

By early afternoon, Sally had weakened into a tropical storm, with winds down to  45 mph as of Wednesday evening, but the worst may be yet to come, with heavy rain expected into Thursday as the storm pushes inland over Alabama and into Georgia. For much of the day, it was moving at just 5-7 mph, concentrating the amount of rain dropped on any one place. 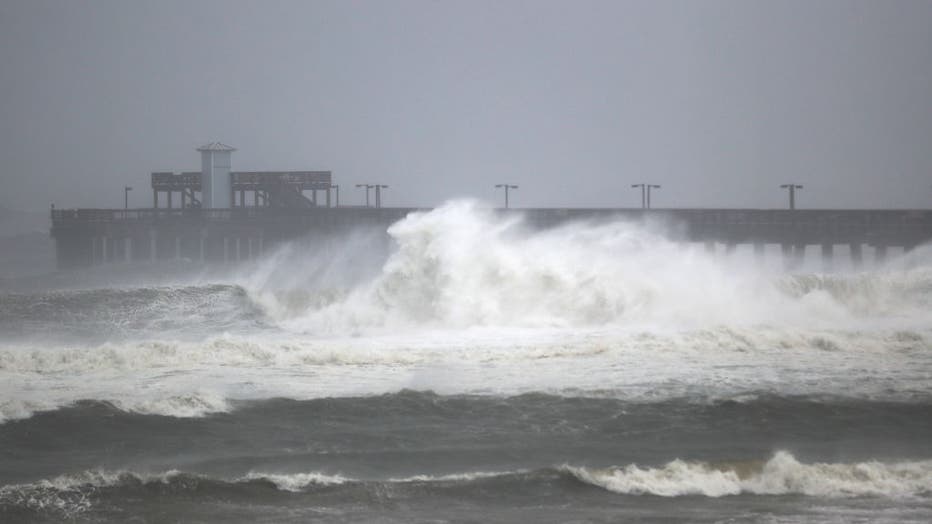 “There are entire communities that we’re going to have to evacuate,” the sheriff said. “It's going to be a tremendous operation over the next several days.”

West of Pensacola, power poles leaned halfway over in Perdido Key, Florida, as Joe Mirable arrived at his real estate business to find the two-story building shattered, its contents scatted on the ground. Digging through the ruins, Mirable pointed out a binder labeled “Hurricane Action Plan.”

“I think the professionals got this one wrong,” he said before the wind blew away his hat.

It was the second hurricane to hit the Gulf Coast in less than three weeks and the latest blow in one of the busiest hurricane seasons ever recorded, so frenetic that forecasters have nearly run through the alphabet of storm names with 2 1/2 months still to go. At the start of the week, Sally was one of a record-tying five storms churning simultaneously in the Atlantic, strung out like charms on a bracelet.

Like the wildfires raging on the West Coast, the onslaught of hurricanes has focused attention on climate change, which scientists say is causing slower, rainier, more powerful and more destructive storms.

An emergency crew rescued two people on Dauphin Island, Alabama, after the hurricane ripped the roof off their home and the rest of the house began to crumble. “As things started to peel off and fall apart, they got scared and called for assistance,” Mayor Jeff Collier said. He said no one was injured.

In Orange Beach, Alabama, the wind blew out the walls in one corner of a condominium building, exposing the interiors of condos on at least five floors, video posted online showed. At least 50 people were rescued from flooded homes and taken to shelters, Mayor Tony Kennon said.

“We got a few people that we just haven’t been able to get to because the water is so high,” Kennon said. “But they are safe in their homes. As soon as the water recedes, we will rescue them.”

In downtown Pensacola, water rushed down some streets like river rapids, forming whitecaps as it slapped against buildings and rose above the tires on cars.

Before sunrise, water was up to the doors of Jordan Muse's car outside the Pensacola hotel where her family took shelter after fleeing their mobile home. The power failed early in the morning, making it too stuffy to sleep. Her 8-year-old son played with toys underneath the hotel room desk as Muse peered out the window, watching rain fly by in sheets. 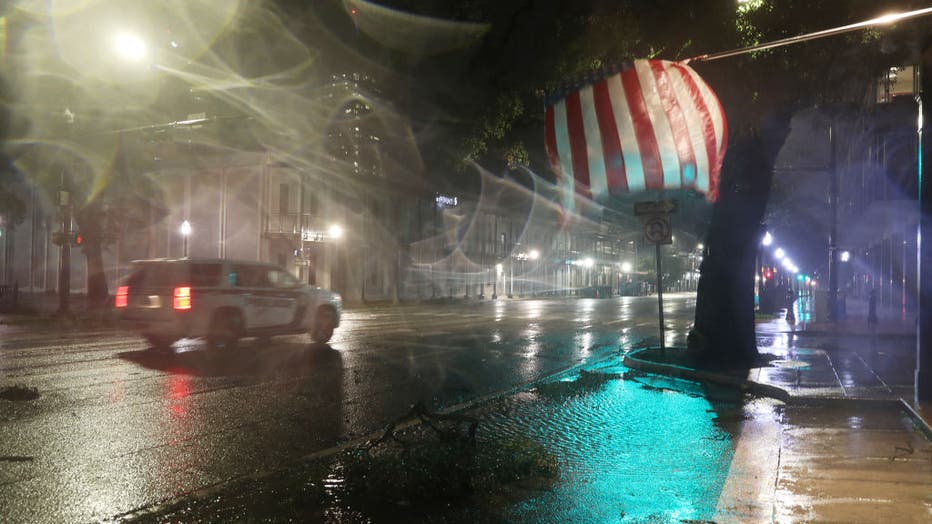 A police vehicle passes through the street as the winds and rain from Hurricane Sally pass through on September 16, 2020 in Mobile, Alabama. (Photo by Joe Raedle/Getty Images)

“The power trucks are the only ones above water, and they’re the biggest,” Muse said. “I can't believe it got so bad."

National Hurricane Center forecaster Stacy Stewart said the rain will be “catastrophic and life-threatening” over portions of the Gulf Coast. Forecasters predicted 10 to 20 inches (51 centimeters) of rain, with up to 35 inches (89 centimeters) in some spots.

RELATED: 5 tropical cyclones brew in Atlantic at the same time, only 2nd time on record

“Sally has a characteristic that isn’t often seen and that’s a slow forward speed, and that’s going to exacerbate the flooding,” said Ed Rappaport, deputy director of the hurricane center. He likened the storm's plodding pace to that of Hurricane Harvey, which inundated Houston in 2017.

Sally’s crawl made it hard to predict where it would strike. Just two days before landfall, the storm was forecast to hit New Orleans — 140 miles west of where it came ashore.

So Robert Lambrisky and his husband were caught somewhat off guard when the hurricane shook their door before daybreak and forced rainwater inside their home in Sanders Beach near Pensacola. After sunrise, choppy seawater covered what is normally 50 feet of beach.

RELATED: Hurricane Alpha? With amped up season forecast, names may run out

“We had some warning, but this was just such a strange storm,” Lambrisky said. “So all of this preparing that you do, when you know the storm is coming, was something we only half did because we were convinced the storm wasn’t going to hit us.”

Sally's effects were felt all along the northern Gulf Coast. Low-lying properties in southeastern Louisiana were swamped by the surge. Water covered Mississippi beaches and parts of the highway that runs parallel to them.

President Donald Trump issued emergency declarations for parts of Florida, Alabama, Mississippi and Louisiana. White House press secretary Kayleigh McEnany said on Fox News Channel that Trump was in contact with the states' governors and ready to help “in every way possible.”

Hurricane Laura pummeled southwestern Louisiana on Aug. 27. Thousands of people were still without power from that storm, and some were still in shelters.

Meanwhile, far out in the Atlantic, Teddy became a hurricane Wednesday with winds of 100 mph (160 kph). Forecasters said it could reach Category 4 strength before closing in on Bermuda, which took a direct hit from Hurricane Paulette only days ago.