The storms on Wednesday spawned several tornadoes in parts of northwestern Texas and central Oklahoma. Significant damage was reported in the towns of Lockett, Texas, and Seminole, Oklahoma, the latter of which was hit by its second tornado in less than 48 hours.

Seminole was also struck by an EF-1 tornado on Monday that caused damage in the area.

May is historically the most active month for tornadoes, so it's not unusual to see frequent severe weather risks this time of year. On average, May sees 294 tornadoes by the end of the month. 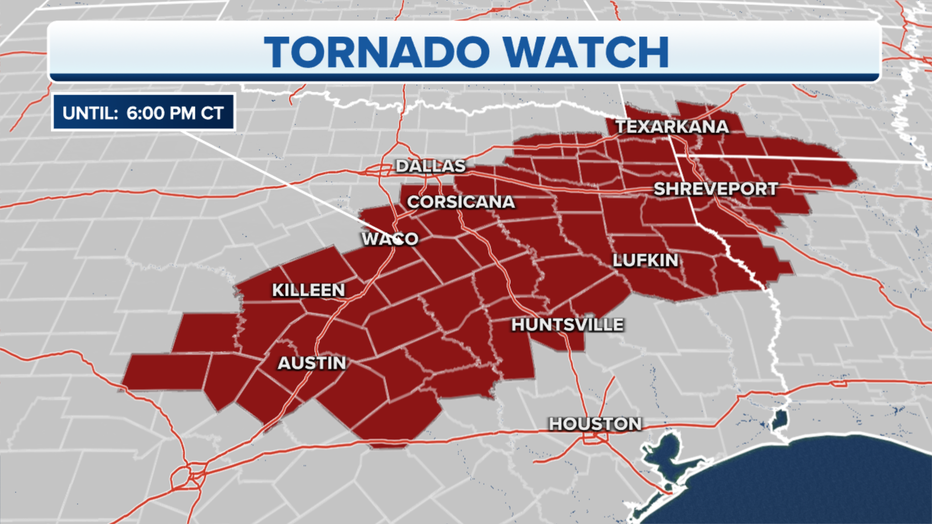 A Severe Thunderstorm Watch has also been issued until 8 p.m. Central time for southern and eastern Arkansas, northern Mississippi and West Tennessee.

Here's what to expect.

Scattered severe thunderstorms are likely Thursday afternoon and evening from parts of Central and East Texas to the mid-South.

Damaging wind gusts are the main threat, but isolated tornadoes and large hail are also possible.

A few severe storms are also not ruled out to the east in portions of the Tennessee Valley.

Thunderstorms are likely across portions of the Southeast, middle Ohio Valley and mid-Atlantic states on Friday.

Some storms will be strong enough to produce hail and damaging wind gusts. A few tornadoes are also possible.

Additional upper-level disturbances will emerge over the central U.S. this weekend into early next week and trigger more rounds of severe storms.

On Saturday evening and Saturday night, a few strong to severe thunderstorms are possible from portions of south-central South Dakota into central Nebraska.

Isolated severe storms are not ruled out on Sunday from eastern parts of the Central Plains to the lower Missouri Valley, but the exact locations at risk are uncertain at this time.

On Monday, a cold front sliding into the upper Midwest will likely trigger severe thunderstorms across portions of Minnesota, Iowa and western Wisconsin. Large hail and damaging wind gusts are the primary threats, but a tornado or two is also possible.

Flash flooding is also a concern across the Plains, Midwest and South as locally heavy rain continues to soak portions of those regions late this week. For more on that story, click here.