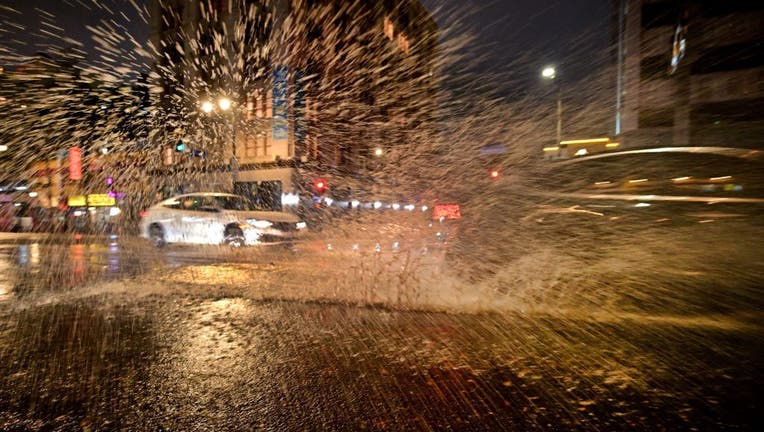 Tropical storm Kay brought rain to Southern California after a week of excessive heat with triple-digit temperatures as a vehicle is seen driving along wet streets in Hollywood, California on September 9, 2022. (Photo by Frederic J. BROWN / AFP) (Pho

After a historic heat wave baked Southern California for over a week with triple-digit temperatures, a storm moved in and brought relief as conditions shifted from hot and dry to hot and humid.

Saturday's forecast includes a 50 percent chance of showers, possible thunderstorms and winds of up to 25 miles per hour with a flood watch that will be in effect through 11 p.m. in the Los Angeles County Mountains and Antelope Valley.

Kay, now a post-tropical cyclone after delivering hurricane-strength winds earlier in the week, brought clouds and rain into the forecast Friday afternoon into the early morning Saturday and is raising fears of possible flooding in mountain areas.

Standing water causes cars to spin out on 10 Freeway

SkyFOX was overhead as multiple cars spun out due to standing water on the 10 Freeway in downtown Los Angeles.

Officials also warn of dangerous driving conditions on the damp roadways. SkyFOX was over the 10 Freeway in downtown Los Angeles and captured multiple cars spinning out due to standing water. 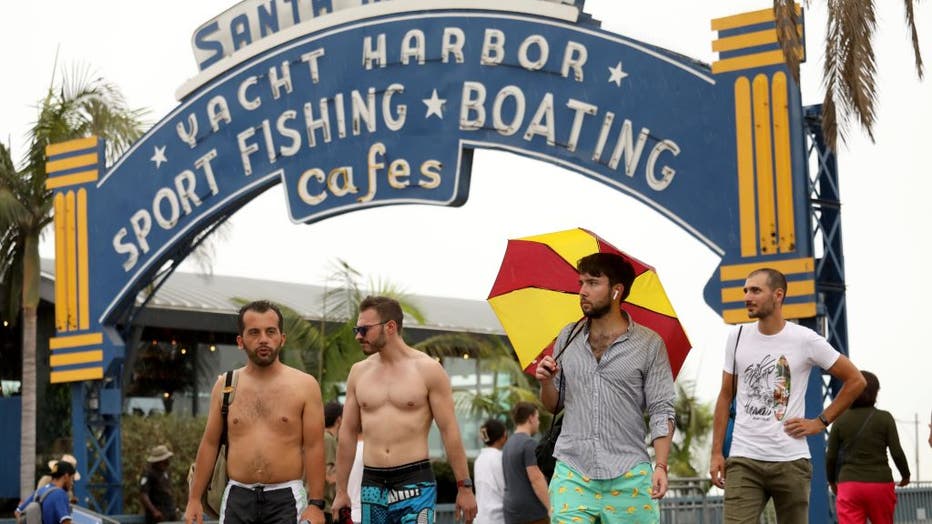 SANTA MONICA, CA - SEPTEMBER 9, 2022 - - As rain begins to fall Pablo Rodriguez, visiting from Mexico, enjoys the shelter of an umbrella while others still dressed appropriately for the heatwave at the Santa Monica Pier on September 9, 2022. As the s

The National Weather Service issued a flood watch that will be in effect from 11 p.m. Friday through Saturday evening in the Los Angeles County Mountains and Antelope Valley. Kay weakened out of hurricane status after it made landfall Thursday night, then began shifting to the northwest over the ocean. But Kay was still packing a punch, promising to bring widespread rain across the region as a tropical storm before weakening to post-tropical cyclone.

According to the National Weather Service, light to moderate rain moved into Orange County Friday afternoon and moved north to Los Angeles and Ventura counties by evening time.

Forecasters said the rain could lead to excessive runoff resulting in "flooding of rivers, creeks, streams and other low-lying and flood-prone locations."

RELATED: La Nina winter 2022-23 could mean tornado outbreaks, blizzards and everything in between

The storm has already caused higher tides, prompting concerns of localized flooding along the coast. In Long Beach, city officials say they are preparing for high tides and possible high swells by fortifying the berms in the Peninsula. Sandbags are being made available to residents if needed. People can pick them up at the parking lot at 72nd Place.

The NWS warned that Kay will bring steep seas and gusty east winds to coastal waters through Saturday.