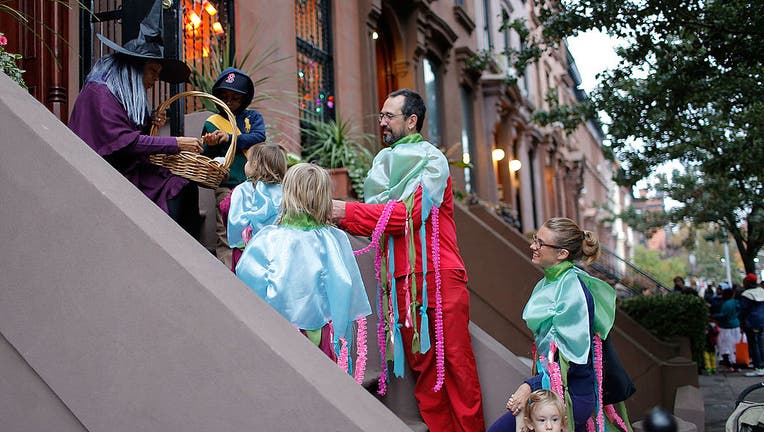 Spooky season is upon us, and whether you're making plans to bring the kids trick-or-treating or creating the best costume to show off at a Halloween party, you're going to need to know if the weather will cooperate.

So listen up, guys and ghouls – FOX Weather has you covered with a look at the Halloween forecast from coast to ghost. 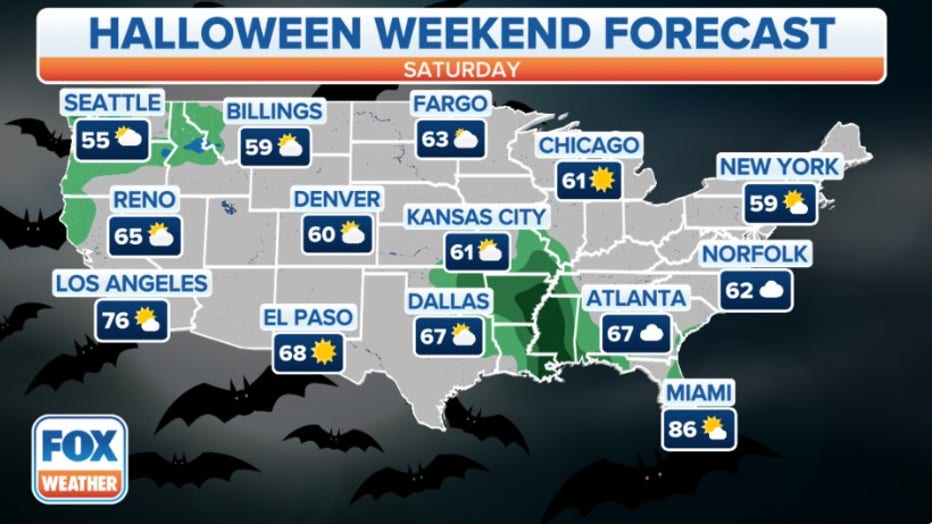 A look at the coast-to-coast Halloween weekend forecast.(FOX Weather)

Halloween falls on a Monday this year, so many people may celebrate the horrifying holiday over the weekend.

Most of the country will see some mild, comfortable weather on Saturday, but there are some trouble spots to be aware of before hitting the streets in your best costumes to give 'em pumpkin to talk about.

In the Northeast, the FOX Forecast Center is expecting temperatures near 60 degrees in New York City with mostly sunny conditions.

Heading south, Norfolk, Virginia, will be cloudy, with temperatures in the lower to mid-60s. The cloudy conditions will also creep into Atlanta, where temperatures will be in the upper 60s.

Miami should be warm, with a high temperature of about 86 degrees.

Rain is expected along the Gulf Coast and into the Mississippi Valley, so grab the umbrellas and raincoats before your trick-or-treating adventure.

Chicago should see plenty of sunshine with a high temperature of about 61 degrees, and those mild temperatures should extend into Fargo, North Dakota, and the Plains.

More rain is expected in the West, too.

Seattle should see a high temperature in the mid-50s with a chance of some rain.

Los Angeles, however, should see great weather for Halloween plans. Conditions there will be in the mid-70s with mostly sunny skies. 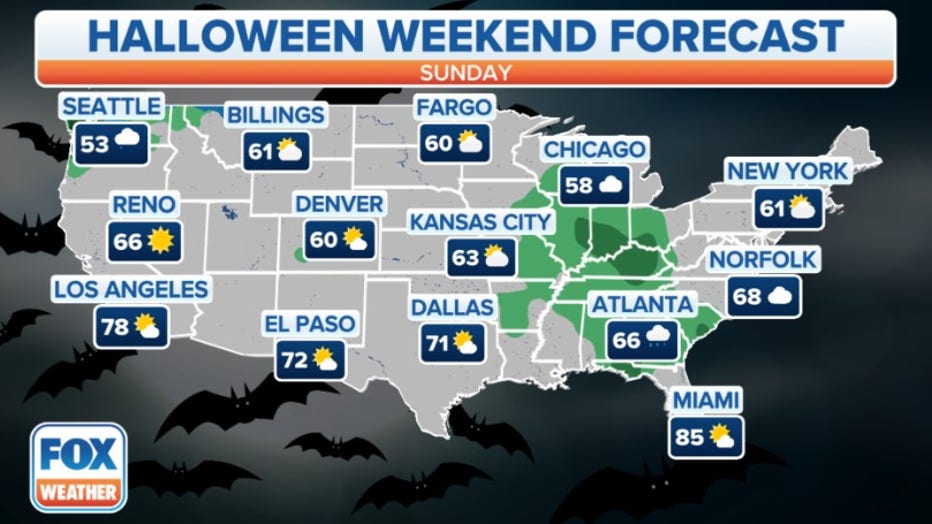 A look at the coast-to-coast Halloween weekend forecast.(FOX Weather)

We're going to creep it real for you if you're living in places from the Midwest to the Ohio and Tennessee valleys and Southeast – Sunday may not be the best day to get in the Halloween celebrations unless your eerie-sistible costumes can stay indoors.

Rain is possible in those areas, but the higher chance of seeing wet weather is in the Ohio and Tennessee valleys.

Chicago should remain in the upper 50s during the day with cloudy conditions.

Atlanta should remain mild, with temperatures in the mid-60s, but rain is expected there.

HOW TO STOP SQUIRRELS, OTHER CRITTERS FROM EATING YOUR PUMPKINS

Mild temperatures will stretch into the Northeast and mid-Atlantic, with New York City seeing a high temperature of about 61 degrees and Norfolk, Virginia, getting close to 70, although it will remain cloudy there.

Temperatures should also remain in the 60s from Billings, Montana, to Fargo, North Dakota, and south through Denver and Kansas City.

But don't mess with Texas – the Lone Star State should see temperatures in the lower 70s in Dallas with mostly sunny skies.

Rain is still possible in the Pacific Northwest, and temperatures will be cooler. Seattle is only expected to reach the lower 50s for a daytime high.

If the goblins in your home are celebrating Halloween on Oct. 31, the FOX Forecast Center expects some not so fa-boo-lous weather conditions along the East Coast, as well as in the West.

Rain is possible from the Southeast to the Northeast during the day on Halloween, but temperatures should remain mild.

Atlanta has a chance of seeing some showers, but temperatures should remain near 70 degrees during the day.

Norfolk, Virginia, will be slightly warmer, with a temperature of 72 degrees, but there's a higher chance of seeing rain there.

New York City will be in the mid-60s and could also see rain dampen Halloween celebrations during the day.

Rain is also possible in the Ohio and Tennessee valleys, stretching into the Great Lakes region as well.

Another area the FOX Forecast Center will be keeping an eye on is the West, where there is a chance of snow during the day.

The high temperature in Billings, Montana, should remain in the upper 50s. However, the higher elevations will be colder, which would produce snow rather than rain.

The chance of snow in those higher elevations exists in Montana, Wyoming, Idaho, Oregon and Washington.

WHAT ARE THE ODDS OF A WHITE HALLOWEEN?

Temperatures will drop considerably on Halloween night, too.

Seattle will drop to around 40 degrees overnight, and Reno, Nevada, which will see a high temperature of about 66 degrees during the day, will plummet into the mid-30s at night.

So grab a jacket to throw over the scary costumes if you're headed outdoors.

Read more of this story from FOX Weather.