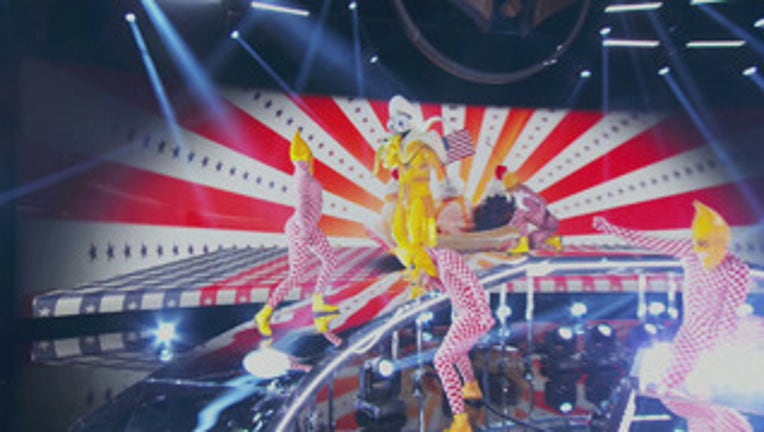 Michaels, the lead singer of the ‘80s hair metal band Poison, was eliminated after facing off with Rhino and then Kitty. (Source: FOX)

LOS ANGELES - No, Ken Jeong, Keith Urban or Brad Paisley were not the ones donning banana costume on FOX’s hit show “The Masked Singer.“

When you consider how the rest of the panel settled on one famous rock star, it’s no wonder host Nick Cannon teased Jeong for probably guessing wrong.

Rock ‘n’ roll icon Bret Michaels revealed himself as the Banana on Wednesday night’s episode. Michaels, the lead singer of the '80s hair metal band Poison, was eliminated after facing off with Rhino and then Kitty.

“This was something I wanted to do,” Michaels said in an exit interview. “This show was one of the best times of my life. I loved every second of it.”Banana’s performance of "Knockin' on Heaven's Door" by Bob Dylan brought the crowd to its feet, but it couldn't propel him past the Rhino.

In his second performance, Banana went with "Brick House" by The Commodores, but Kitty dazzled the crowd with a bit of foreshadowing.Kitty’s rendition of Sia’s "Unstoppable" was enough to send Banana packing, leaving the field of contestants dwindled down to six.

The Battle of the Sixes begins next Wednesday.