LAKELAND, Fla. - Polk County Sheriff Grady Judd said the former Marine sharpshooter accused of murdering four family members in their home told detectives as they arrested him, "You know why I did this."

"The big question that all of us has is, ‘Why?’" Haas said. "We will not know today or maybe ever."

Authorities believe Riley, 33, may have a mental illness, and said he told investigators he was high on methamphetamines at the time of the shooting rampage. His girlfriend said had been saying for weeks that he could communicate directly with God.

Riley surrendered on Sunday morning after a furious gunbattle with authorities who brought in at least one armored vehicle during their standoff. After it was over, an officer rushed into the home and rescued an 11-year-old girl, who was still conscious despite being shot multiple times. She was the only one in the home to make it out alive. Investigators said she survived by playing dead during the shooting.

"She said, ‘I played dead and I prayed,’" Judd told reporters Tuesday.

The girl's family told FOX 13 the attack claimed the lives of her father, 40-year-old Justice Gleason, along with her stepmom, 3-month-old baby brother, and step-grandmother.

According to Judd, Riley told interrogators that the victims "begged for their lives, and I killed them anyway."

The 11-year-old girl who survived a quadruple murder in Polk County will have to remain in Tampa General Hospital for several months, her family said. They also described the girl as resilient.

RELATED: Judge denies bond for ex-Marine accused of murdering 4, including mother and her baby

"He’s evil in the flesh. He’s a rabid animal," Polk County Sheriff Grady Judd said at a news conference Sunday. "Prior to this morning, this guy was a war hero. He fought for his country in Afghanistan and Iraq. And this morning he’s a cold-blooded killer."

On Saturday, around 7:30 p.m., a woman dialed 911 to report a suspicious man in a vehicle. Deputies said the man was Riley.

The woman said the man told her, "God sent me here to speak with one of your daughters."

She said she he wouldn't leave, and alerted a nearby man on a lawnmower, detectives said. Riley told him that he was there to speak to someone named "Amber" because she was going to commit suicide and he needed to save her. They told Riley that there wasn't anybody at the house with that name, and if he didn't leave they were going to call the cops.

According to the sheriff's office, they said Riley replied with, "No need to call the cops, I'm the cops for God," and left. Deputies arrived within six minutes of the call, but the man and the vehicle were already gone. 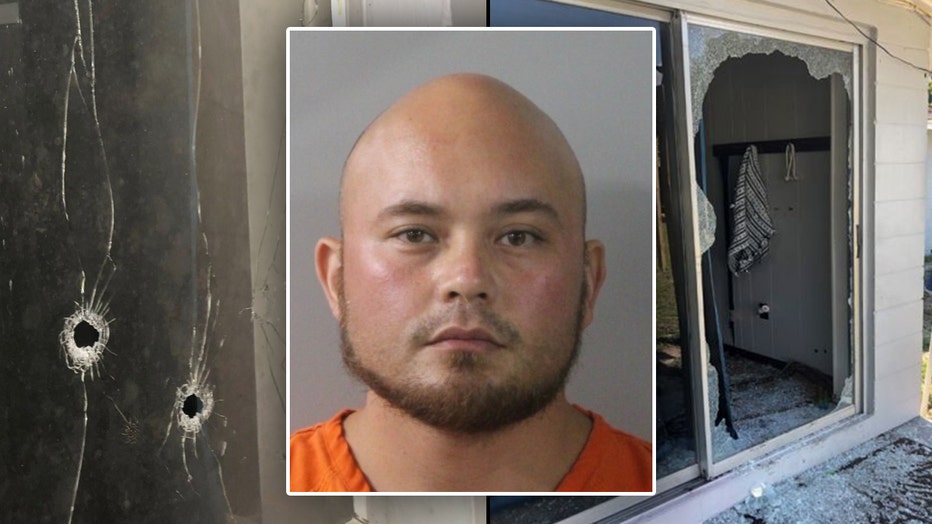 Around 4:30 a.m. Sunday, a lieutenant with the Polk County Sheriff's Office heard rounds of an automatic gun going off nearby while out on a separate call.

He notified his deputies to respond to the scene. At the same time, PCSO began getting 911 calls about reports of shots fired and began community-wide active shooter protocols.

When they arrived on the scene, they found a truck on fire in the front yard of a home on North Socrum Loop Road near Fulton Green Road. Law enforcement said they spotted Riley, dressed in camouflage, in the front yard before he ran back inside the home.

Moments later, those outside the home heard another round of gunfire followed by a woman's screams and a baby's cry. Those on scene tried to make entry but quickly found out the front door was barricaded.

The lieutenant went to the back of the house where the suspect shot at him. The lieutenant returned fire and got away from the house. That's when the suspect starting shooting at deputies and officers with the Lakeland Police Department. Officials said at least one bullet struck Riley, who had put on a bulletproof vest.

Riley surrendered just a few moments later, walking out of the house with his hands up, officials said. He was taken to Lakeland Regional Hospital to be treated for a gunshot wound.

Judd said Riley later confessed that after leaving the area Saturday afternoon, he went back to Brandon and created an "ops plan" because his encounter with the victims had angered him.

"If you create an ops plan, you have to kill everybody," the sheriff said. "It is bizarre at best. At this moment in time, we can't establish any relationship at all between him and our victims. None."

Sheriff Judd announces Bryan Riley's arrest for the murders of four family members on Sunday: "If he had given us the opportunity, we'd have shot him up a lot," the sheriff said. "But, he didn't because he's a coward."

When deputies made it inside the house, they found the bodies of four people. The sheriff's office declined to say how many times the victims had been shot, but said they had all been huddling in fear, with the infant dying in his mother's arms. Even the family dog was shot to death.

"I will never be able to unsee that mother with that infant laying deceased in her arms as she lay dead," Judd said.

Investigators said when a Polk County sergeant ran into the house to rescue the 11-year-old girl, she told him her other family members were dead.

"She was very scared when this happened, but she just prayed during the event and knew it would be OK," the 11-year-old girl's family said in a statement sent to FOX 13 Monday night. "We appreciate all the well wishes, kind words and prayers. We would also like to send our condolences to the other family members and friends affected by this tragedy."

She remains at Tampa General Hospital where her family said she will be for several months. So far, she's undergone at least four surgeries, but she is awake, talking, reading and writing.