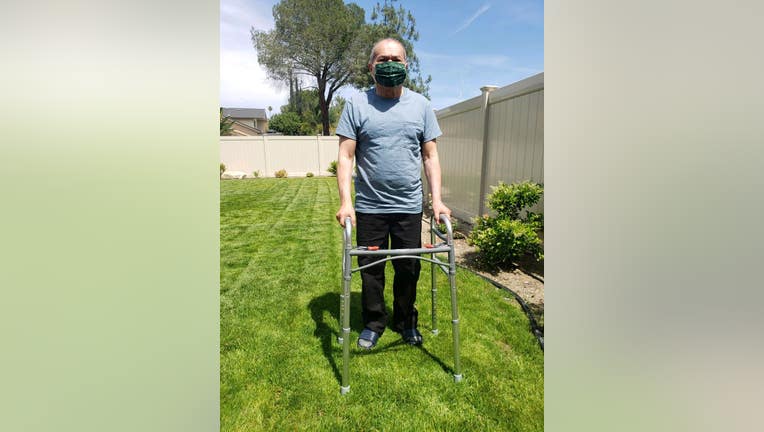 79-year-old Jose Luis Lopez Guevera left Yuba County Jail on May 6, 2020 into the care of his son in Santa Clarita, Calif.

SAN DIEGO, Calif. - A story of two detainees in federal immigration custody emerged this week: California's first ICE detainee died of coronavirus, while in a different part of the state, an elderly convict was released into the care of his son.

On Wednesday,  Carlos Ernesto Escobar Mejía, 57, who had been held at Otay Mesa Detention Center in San Diego, became the first known person in ICE custody to die from the coronavirus, which he contracted at the facility.

His sister, Rosa, said her Salvadorian brother, who used a wheelchair, had asked a judge to be released because he was ill. But he was denied release, despite suffering from hypertension and diabetes, because the judge felt he was a flight risk, ICE confirmed.

“Across California, ICE and for-profit detention operators’ response to the coronavirus has been a complete failure. Had ICE and CoreCivic acted with at least a modicum of competence and organization, this death would not have taken place. Now thousands of other lives remain in jeopardy,” said Lisa Knox of Oakland's Centro Legal de la Raza, an organization that represents detained immigrants throughout California. CoreCivic is a private prison contractor.

ICE spokeswoman Lauren Mack sent a statement confirming that Escobar-Mejía died at Paradise Valley Hospital in National City, Calif., where he had been hospitalized since April 24, after exhibiting COVID-19 related symptoms.

"Fatalities in ICE custody, statistically, are exceedingly rare and occur at a fraction of the national average for the U.S. detained population," ICE officials added. "One of ICE’s highest priorities is the health and safety of those in our custody. ICE remains fully committed to ensuring that those in our custody reside in a safe, secure, and clean environment."

CoreCivic spokeswoman Amanda Gilchrist told the Washington Post that the facility was in close contact with ICE about Escobedo Mejia's condition and "immediately notified" the agency when he died.

"We extend our heartfelt sympathy to this individual's loved ones," Gilchrist said.

ICE records showed he first entered federal custody in March 2012 following his arrest by Los Angeles Sheriff’s Department. His criminal convictions include grand theft, possession of a controlled substance, receiving known stolen property and DUI, according to ICE. He was released on an immigration bond in June 2012.

ICE reported that nearly 1,500 detainees have been tested nationwide. Of that number, about 125 detainees have tested positive for COVID-19 across 25 of ICE's detention facilities, according to Syracuse University's Transactional Records Access Clearinghouse, or TRAC. As of about three weeks ago, ICE was holding 33,000 people in custody at 184 facilities spread throughout the United States, according to TRAC.

Since March 1, 400 detainees - about 1.2% of the total - have been released, according to ICE's national numbers.

That data did not include the release of  79-year-old Jose Luis Lopez Guevera.

He was allowed on Wednesday to leave the Yuba County Jail, where he had been held in ICE custody, into the care of his son, Henry Guevara, in Santa Clarita, Calif.

There have been COVID-19 positive detainees at the Yuba County Jail or at the Mesa Verde Detention Center in Bakersfield, both in Northern California.  Both ICE facilities have proactively reduced their populations, and ICE San Francisco Field Office Director David Jennings has exercised his discretion in numerous cases.  In a statement, Jennings said the "overwhelming majority of detainees in ICE’s San Francisco Field Office area of responsibility are convicted criminals or have pending criminal charges."

At this point, Jose Guevara fits into neither of those categories.

According to his family, he is a lawful permanent resident from El Salvador who served a 39-year prison sentence for a murder conviction. He was taken into ICE custody just after finishing serving his time.

Centro de Legal also represented the Guevara family, pleading with the judge that the elderly man has chronic arthritis, high blood pressure and experiences shortness of breath. In addition, the lawyers pointed out to the judge, he had already served his prison sentence and if he had been an American citizen, he would be a free man.

Henry Guevara, who served with the Marines in the Iraq War, said it was these factors that convinced the judge to let his father stay with him as he sorts out his civil immigration status.

"It feels amazing," Guevara said of seeing his father for the first time in many years.

He picked up his Dad and took him straight to his home where they celebrated with chicken from Pollo Loco.

"I still can’t believe it," he said. "I’m still pinching myself."