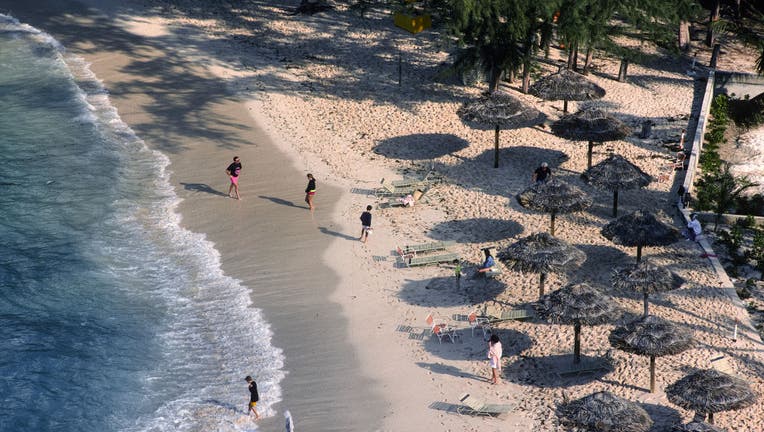 Aerial view of an unspecified beach where a visitors stand between the water's edge and a number of beach umbrellas, Paradise Island, Bahamas, December 24, 1989. (Photo by Barbara Alper/Getty Images)

Three Americans at a Bahamas Sandals resort were found dead while a fourth has been hospitalized, officials said Friday.

The local police said they were investigating the "sudden death" of the three Americans, and it remains unclear how the individuals died.

"On their arrival at the scene they were directed to the first villa. On entering a bedroom, they found a caucasian male laying on the ground unresponsive," the Royal Bahama Police Force said in a statement posted to Twitter. "An examination of the body was conducted, there was no signs of trauma found. The local doctor later pronounced the victim dead."

The officers then proceeded to a second villa where they found another man unresponsive and "slumped the wall in the bathroom." A woman was also found unresponsive in a bedroom on a bed.

"The officers examined the bodies and found no signs of trauma. The local doctor later pronounced both persons dead," the Bahama police said.

The police statement said the couple in the second villa had sought medical treatment the night before they were found dead, complaining of feeling ill.

They then returned to their lodgings.

Authorities said they will await the results of an autopsy and that the "matter remains under active investigation."

Cooper Friday night said a fourth American had been found, but he did not clarify where she was found.

The acting prime minister said he was advised that "foul play is not suspected."