The Houston Police Department says an officer, two wrecker drivers and another driver were hit by a car while at the scene of a previous crash.

HOUSTON - A series of crashes at the same turn of the roadway left a Houston police officer and another driver hospitalized.

The crashes occurred early Friday morning at Hidalgo and the I-610 West Loop Service Road.

It was just after 3 a.m. when a dark-colored sedan crashed at the intersection and ended up off to the side. Moments later, a Jeep that was attempting to make the sharp right turn at Hidalgo also crashed but did not hit the other vehicle.

HPD was assisting with the accident that occurred here, and two wrecker drivers arrived at the scene. While they were attempting to get the Jeep onto the wrecker, a third vehicle – a Honda Accord – making the same turn hit the HPD officer, two wrecker drivers, and the driver of the Jeep.

Only the driver of the Jeep and the HPD officer were transported to the hospital with non-life-threatening injuries. They were last reported to be in stable condition.

The two wrecker drivers denied medical attention at the scene. 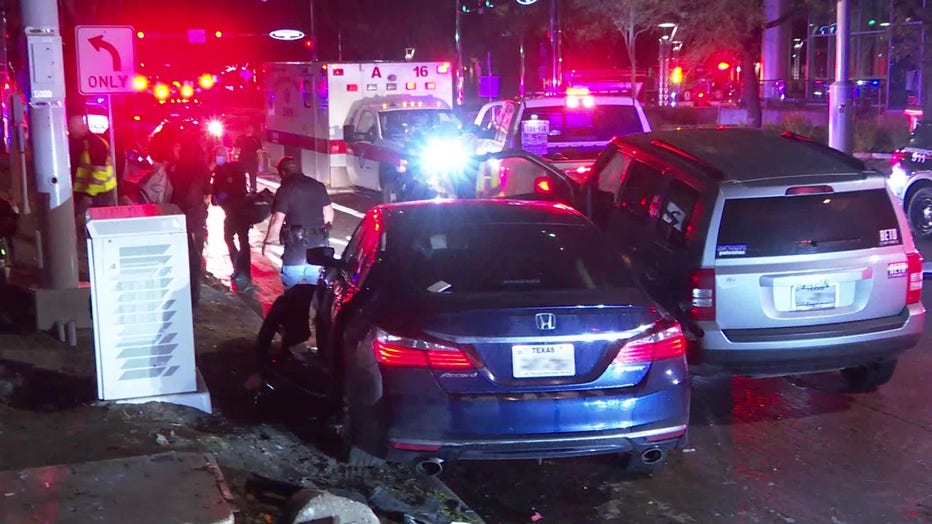 The Houston Police Department investigates a crash on Hidalgo at the West Loop.

It’s too early to know if drugs or alcohol played a role in these accidents, but the wet roads, low visibility, and sharp turn are possibly contributing factors to these crashes.

"I used to work patrol in this area, so I know it’s a very sharp turn. So you have to get on the brakes, otherwise what happened over here is going to happen if you’re not familiar with the area," said Sgt. Pham with HPD.

So far, no arrests have been made in connection to these crashes. The driver who was transported to the hospital is believed to have been under the influence of alcohol, but that will be determined while she is at the hospital.