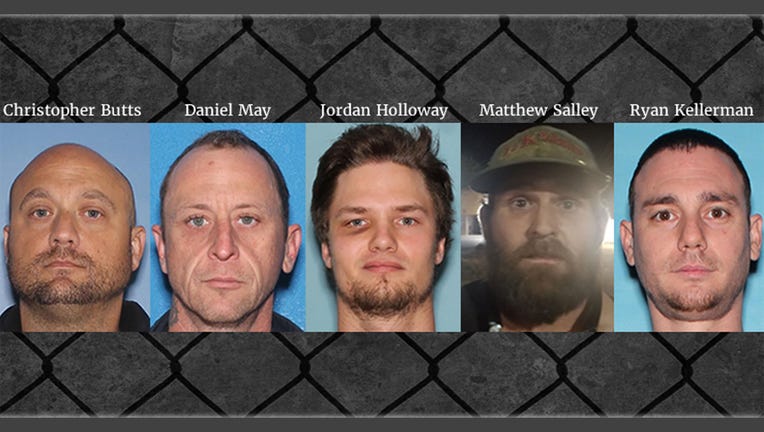 PHOENIX - Five people were arrested in Arizona following a months-long operation to combat child sexual exploitation and child sex trafficking — including a former sheriff’s detective who was out on bond for a previous arrest on the same charges, officials said.

The suspects, identified as Ryan Kellerman, 36, Daniel May, 40, Matthew Salley, 38, Jordan Holloway, 26, and Christopher Butts, 44, were arrested between Aug. 26 and Sept. 3, according to a statement from U.S. Immigration and Customs Enforcement’s Homeland Security Investigations (HSI).

The operation, dubbed “Operation Home Alone 2,” targeted sexual predators “who attempted to lure underage children with the intent of engaging in sexual activity,” authorities said. The investigation was led by detectives from the Arizona Department of Public Safety, and involved other local, state and federal agencies — including HSI.

May and Salley, both of Maricopa, Arizona, were arrested Aug. 26 and charged with luring a minor for sexual exploitation, authorities said. The city of Maricopa is located about 45 miles south of Phoenix.

Holloway was arrested the next day on the same charge.

On Sept. 2, Butts, a former Maricopa County Sheriff’s Office detective from Phoenix, was arrested on charges of aggravated luring of a minor for sexual exploitation and furnishing harmful items to a minor, according to the statement.

Butts was out on bond for his arrest in February on the same charges, officials said.

Kellerman, of Maricopa, was arrested Sept. 3 on charges of aggravated luring of a minor for sexual exploitation and furnishing harmful items to a minor. Authorities said Kellerman is also a suspect in a child pornography case with the Maricopa Police Department.

All suspects were booked into the Pinal County Jail, according to the statement.

“HSI, working alongside our law enforcement partners, is deeply committed to pursuing alleged predators lurking within our communities seeking to harm and exploit our most vulnerable population,” Scott Brown, special agent in charge for HSI Phoenix, said in the statement. “This multi-agency effort epitomizes our ongoing mission in Arizona and is a testament to the men and woman who working these heinous cases.”

RELATED: US Marshals rescue 25 missing Ohio children in past 20 days, some recovered as far away as Miami