Working remotely can save thousands per year, career site finds

The average worker can save almost $5,000 a year just by not driving into the office anymore.

LOS ANGELES - As pandemic restrictions lift across the country, more and more companies are asking their employees to return to the office. But a recent survey found that 64% of workers would rather quit their jobs than return to an office full time.

The survey, published by the ADP Research Institute, a data analytics organization, found that workers have become more comfortable with their work from home environments following the onset of the COVID-19 pandemic.

Resistance to returning to an office full-time is more prevalent with younger workers. Roughly 71% of employees aged 18-24 said they would consider finding another job if their company asked them to return to the office full-time. That’s even higher than the 61% of adults aged 35-44 who expressed the same sentiment.

In February, much of the American workplace was finally beginning to transform into something that resembled pre-pandemic days.

RELATED: The Great Return: More companies calling employees back to the office

Tech companies like Microsoft and Facebook that allowed employees to work fully remote began setting mandatory dates to return to the office after a series of struggles with pandemic restrictions.

"There has been a sharp decline in COVID-19 cases across the country over the past weeks," Amazon told workers in a memo. "Along with increasing vaccination rates across the country, this is a positive sign we can return to the path to normal operations."

How businesses are adapting to remote work

Meanwhile, some businesses are opting to offer workers more flexibility to work from home in hopes of seeing cost savings from limiting their real estate holdings.

Insurance company Mutal of Omaha told the Associated Press it plans to build a glassy new headquarters in its namesake Nebraska that would only accommodate between 2,200 and 2,500 people despite having 4,000 employees.

The number of people working remotely is clearly growing because so many companies learned they could do it during the pandemic. The Society for Human Resource Management estimates the number of totally remote U.S. workers will double to roughly 36 million people by 2025. But the CEO of that trade group, Johnny C. Taylor Jr., said that will still only account for a little over 20% of the workforce. The other nearly 80% will work in an office at least part of the time. 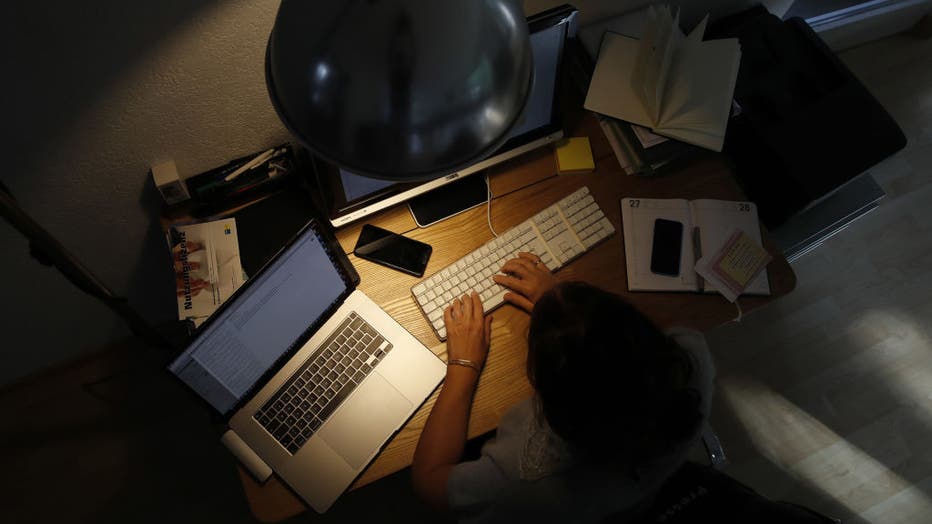 A woman works at a desktop computer alongside an Apple Inc. laptop in a home office at night in this arranged photograph taken in Bern, Switzerland, on Saturday, Aug. 22, 2020.

Another survey done last year by CBRE Group, the world’s largest commercial real estate services and investment firm, showed that 87% of large companies planned to use a hybrid schedule after the pandemic, with workers in the office part of the time.

And separate worker surveys that SHRM and Gensler conducted last fall both showed that more than half of workers wanted to be back in the office at least one day a week.

But so far businesses have been slow to bring employees back. An average of 36.8% of the workforce was back in offices during the fourth week of February in 10 major U.S. cities monitored by Kastle Systems, which tracks building access-card swipes. That number has been creeping up since early January when it fell as low as 23% during the omicron surge.

Mutual of Omaha CEO James Blackledge said bringing people together in an office at least periodically will boost productivity and creativity, and having a gleaming new $433 million office should help the company attract new talent. Plus, the new headquarters will likely be smaller overall than Mutual’s current headquarters complex, but the exact size will be determined later in the design process.