Mount St. Helens erupted on this day in 1980

Footage of the volcano's eruption shows smoke rising up into the air. (Credit: USGS Volcanoes/Twitter)

Forty years ago, trees were leveled and the sky was filled with ash as Mount St. Helens erupted. Located just under 100 miles south of Seattle and 50 miles northeast of Portland, Oregon, the volanco’s eruption was the largest in history of the continental United States and one that left 57 people dead.

Here is a look back at the events that lead up to the historic eruption: 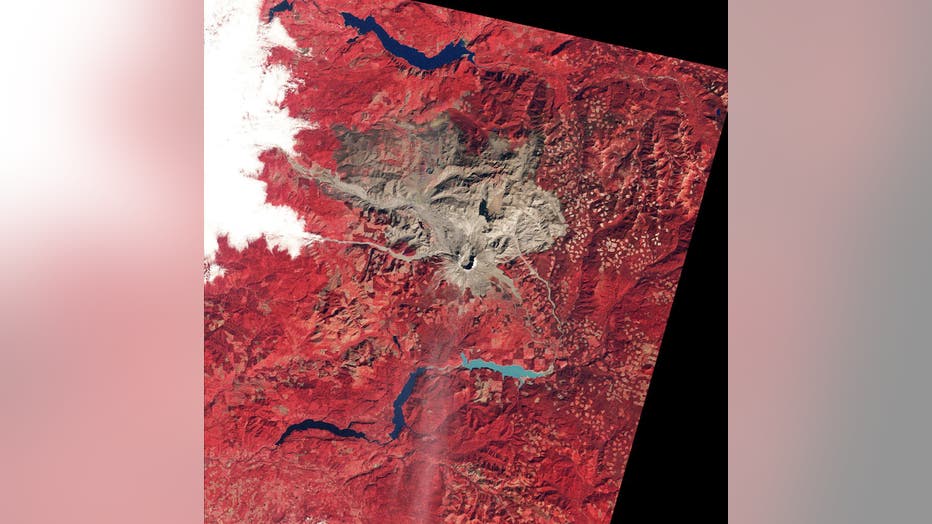 Site of the Mount St Helens Volcanic eruption, as it appeared in 1980. On May 18, 1980, a major volcanic eruption occurred at Mount St. Helens, a volcano located in the state of Washington, United States. The eruption (a VEI 5 event) was the only sig

According to the United States Geological Survey (USGS), small earthquakes were observed at the volcanic site on March 16. Those seismic events would continue through the month with when steam explosions blasted a crater through the volcano’s summit ice cap on March 27.

“Within a week the crater had grown to about 1,300 feet in diameter and two giant crack systems crossed the entire summit area,” the USGS noted, with the organization describing how by mid-May, thousands of earthquakes had shaken the volcano, causing magma to rise.

Struck by an earthquake with a 5.1 Richter scale, Mount St. Helens erupted on May 18. The first to report on the event was David A. Johnston, a USGS volcanologist who had been onsite studying the mountain, and one of the individuals who would perish in the disaster.

According to a news release from the USGS, the “eruption fed a towering plume of ash for more than nine hours, and winds carried the ash hundreds of miles away.”

In what sounds like something out of a major Hollywood disaster movie, volcanic mudflows from the eruption would carry large boulders and logs down the mountain, destroying nearby forests and buildings, according to the USGS.

First-hand recollections from those who witnessed the disaster from afar sound near-apocalyptic. Interviewing multiple people who remember watching the volcano erupt, The Oregonian described how a passenger on an airplane could see “dark gray boiling clouds pouring out of the mountain,” with another describing the eruption looking as if an atom bomb had gone off.

Influencing the future of volcanology

Since 1980, there have been major volcanic eruptions across the world that have resulted in the deaths of dozens of people to several thousands. Within the continental United States, however, Mount St. Helens remains the deadliest volcanic event.

The Mount St. Helens eruption would spur new advances and developments within the study of volcanoes. “Before 1980, scientists saw sharp divisions among volcano hazard studies, volcano monitoring and basic volcanology research,” according to the USGS. “The 1980 eruption, however, required scientists to work together in a more integrated manner.”

The technology used to monitor volcanoes has also evolved in the wake of the 1980 eruption as well as the importance of active monitoring volcanoes to determine threats they pose to their nearby communities.

Since the eruption of Mount St. Helens, volcano monitoring has evolved from placing a few scientific instruments on a volcano’s flanks to a broader integrated network of monitoring devices that measure earthquakes, deformation and volcanic gases, and can detect eruptions or changes on the Earth’s surface from space.