AUSTIN, Texas - With a major winter storm brewing from Texas and the Plains to the Midwest and Northeast, many have their eyes on Texas' power grid.

Texas Governor Greg Abbott held a press conference in Austin ahead of the severe winter weather expected later this week to talk more about what the state has done to prepare since the deadly winter storm in February 2021.

Abbott spoke from the Alternate State Operations Center. He was joined by representatives from a multitude of different state departments such as the Texas Division of Emergency Management, ERCOT, Public Utility Commission of Texas, and the Texas Department of Transportation.

"There will be thousands of roads that will be dangerous and could put your life in danger. We urge people to be cautious on roadways," Abbott said.

IS TEXAS PREPARED FOR A WINTER STORM?

Abbott began by focusing on what the state of Texas has done for winter preparations in the aftermath of Winter Storm Uri. "At least 99 percent, if not more, of the power generators in Texas have passed inspection or are fully operational," Abbott said.

The Public Utility Commission of Texas (PUC) is reportedly planning on having 24-hour staff at the Alternate State Operations Center during the duration of the winter storm to monitor power outages and provide updates to Texans.

Despite the measures being taken, Texans are being warned that power outages are possible. Abbott believes the largest electricity demand will come Friday morning, with the possibility of icing.

Everyone is being asked to pay attention to local forecasts.

Texans are also being asked to stay off the roads on Thursday, if at all possible. "There will be thousands of roads that will be dangerous and could put your life in danger. We urge people to be cautious on roadways," Abbott said.

A major winter storm is brewing from Texas and the Plains to the Midwest and Northeast, where significant amounts of snow and ice will likely cause widespread travel disruptions and power outages starting Tuesday night.

A very strong arctic cold front will move through South Central Texas Wednesday afternoon and evening bringing the coldest temperatures we have seen so far this winter, according to the NWS Austin / San Antonio. Forecasters believe a wintry mix of freezing rain and sleet will occur across portions of South Central Texas by Thursday morning and continue possibly into the afternoon.

There is also a chance that freezing rain and sleet amounts could cause travel impacts through the Hill Country and into the Austin metro area by Thursday morning and continue through the day. Up to ¼ of an inch of ice is currently forecast.

A Winter Storm Watch has been issued for this region. 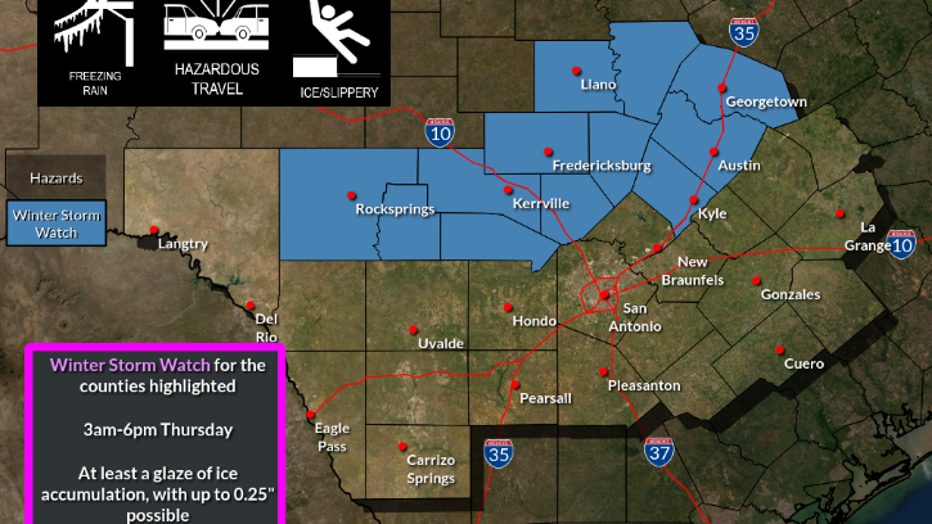 A Winter Storm Watch has been issued for this region.

Drivers are reminded that travel could be very difficult on untreated roads, especially elevated bridges, overpasses, and roadways. There is a slight chance for light icing impacts to occur farther south to a Del Rio to northern San Antonio to La Grange line.

There is also a slight chance for a brief changeover to light snow across Val Verde, Edwards and the northern Hill Country counties before precipitation ends.

___
MORE HEADLINES:
Major winter storm to spread snow, ice from Texas to Midwest, Northeast starting on eve of Groundhog Day
How to build an emergency kit
Here's what to have on hand if the power goes out during a winter storm