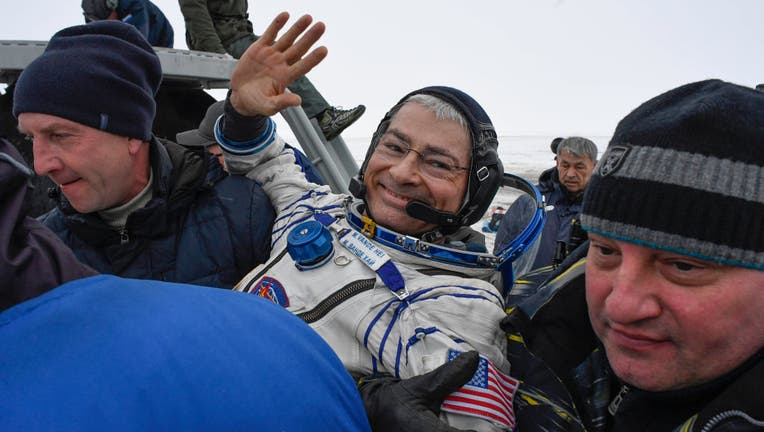 NASA Astronaut Mark Vande Hei is about to feel the weight of Earth's gravity for the first time in nearly a year when he lands in Kazakhstan on Wednesday along with two Russian cosmonauts.

Since he arrived in space on April 9, 2021, the veteran NASA astronaut has missed a year of holidays, family gatherings and the second year of a global pandemic as Vande Hei has been working on the International Space Station about 200 miles above Earth.

Vande Hei will hold the record for the longest American spaceflight at 355 days by the end of his mission. During his career, he has spent more than 520 days in space.

In a recent interview from space, Vande Hei said he promised his wife, whom he has not seen in person since January, that this will be his last spaceflight. He said he's looking forward to being "physically present" for his family.

The astronaut said when he returns he will feel gratitude for the opportunities he has had in space to represent humanity, but he will also feel "a little bit of sadness because I'll be shutting the door on that, and this is a very, very special place."

Since Vande Hei launched in a Russian Soyuz spacecraft, that is also how he will be returning home. The planned re-entry comes about a month into Russia's invasion of Ukraine. The ongoing war has displaced millions and created tensions between the Russian Space program, Roscosmos, and countries it usually partners with on spaceflights.

Despite the ongoing war, NASA officials said earlier this month there is no doubt Vande Hei will be coming home on the Soyuz.

"I can tell you for sure Mark is coming home on that Soyuz. We are in communication with our Russian colleagues. There's no fuzz on that. The three crew members are coming home: Anton, Pyotr and Mark," NASA ISS program manager Joel Montalbano said on March 14. "There's been some discussion about that. But I can tell you we're ready. Our Roscosmos colleagues have confirmed that they're ready to bring the whole crew home. All three of them."

RELATED: Chef José Andrés is sending a family meal of paella to space with Axiom-1 crew

Russian cosmonauts Anton Shkaplerov and Pyotr Dubrov and NASA's Vande Hei will close the hatch to the Soyuz spacecraft at 12 a.m. ET March 30 and begin undocking from the International Space Station at 3:21 a.m.

For anyone worried about Vande Hei's safety, Montalbano said there would be a contingent of about 20 people to welcome him.

"We continue the plan to pick up Mark VandeHei with the NASA plane like we've always done," Montalbano said.

Doctors, human research personnel, representatives from the astronaut office and some officials from the U.S. Embassy will be there.

According to NASA, Vande Hei will have traveled more than 150 million miles and orbited the Earth 5,800 times during his space stay.