Kentucky Gov. Andy Beshear declared a state of emergency Monday because of heavy rainfall across the state.

Officials in Kentucky were surveying the damage Wednesday after heavy rains hit many parts of the state, resulting in massive flooding and evacuations this week. In at least one county, residents were asked to conserve water.

"This is going to be one that will go into the record books," Dossett said during a news conference Tuesday afternoon. He added that the state asked FEMA to send an investigator to look at the homes damaged and inundated by flooding. 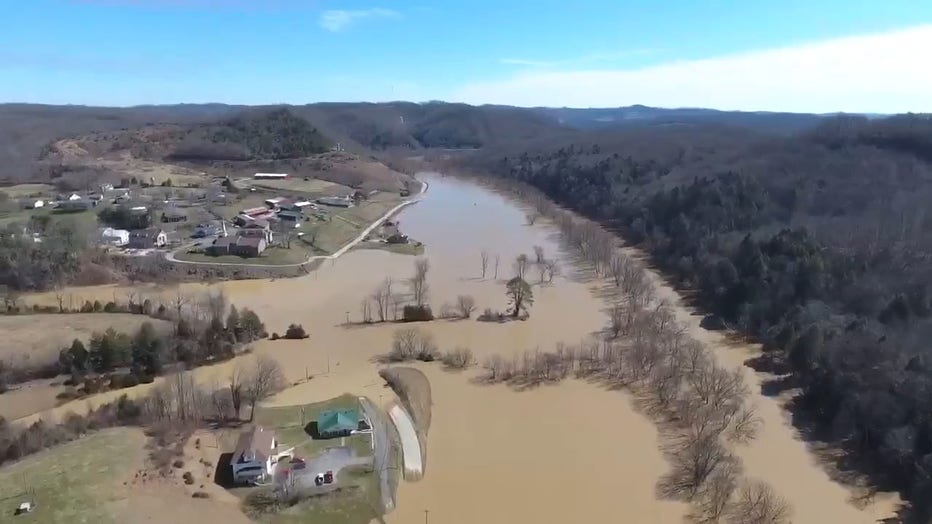 A flood warning was issued for the Kentucky River near Ravenna in Estill County through Thursday afternoon. Some county residents were asked to conserve water after a water district pump lost power.

"We have enough in our tanks and lines throughout the county to last until tomorrow if we all do our part and only use what we need," Estill County Water District No. 1 wrote in a Facebook post.

Beshear on Tuesday also visited a hard-hit area in Calloway County in western Kentucky. Aerial photos showed cars and other vehicles nearly underwater, and dark waters swirling in the streets of some cities.

In Wolfe County, the Hazel Green Volunteer Fire Department said it rescued about 15 people Sunday night from flooded homes and vehicles. Wolfe County Sheriff Chris Carson used a tractor with a front-end loader to rescue a family from a flooded roadway.

Floodwaters were receding in many parts of the state by Wednesday, but problems remained.

State officials said the Kentucky River in Breathitt County was putting pressure on an earthen dam there, forcing the county to call for about 1,000 residents in Jackson to evacuate. Beshear said the evacuations were a precaution.

Drone footage captured Tuesday by David Lorimer shows the extent of flooding in Breathitt County, with floodwaters in and around the city of Jackson.

In nearby Lee County, officials said in a Facebook post Wednesday that the "road to recovery begins today."

"We are moving forward," Lee County government officials wrote in a follow-up post. "Many in our community have lost quite a bit and there is genuine fear about how we are going to come back from this, but we will as a community."

The county said more roads were opening up as the water receded, but advised residents that flooding had also impacted the water system.

"Water pressure may be low and boil water advisories are in effect since floodwaters have impacted the entire system," officials said.

RELATED: Massive iceberg, 20x the size of Manhattan, breaks off in Antarctic