The plane had one of four engines that used 100% Sustainable Aviation Fuel (SAF), which consists of a combination of cooking oils and fatty acids.

The flight took off from the Blagnac Airport in Toulouse, France, at 8:43 a.m. and returned safely, the company said.

The SAF used to fuel the plane was produced in Normandy, France by TotalEnergies, a company that creates sustainable sources of energy for a global market, according to the company website.

The fuel was created from Hydroprocessed Esters and Fatty Acids (HEFA), which is free of aromatics and sulfur, according to Airbus.

"Increasing the use of SAF remains a key pathway to achieving the industry’s ambition of net-zero carbon emissions by 2050. Key statistics outlined in the Waypoint 2050 report indicate that SAF could contribute between 53% and 71% of required carbon reductions," the company said.

Currently, all Airbus aircraft are certified to fly with up to 50% blend of SAF that is mixed with kerosene, but the company hopes to achieve 100% SAF by the end of this decade. 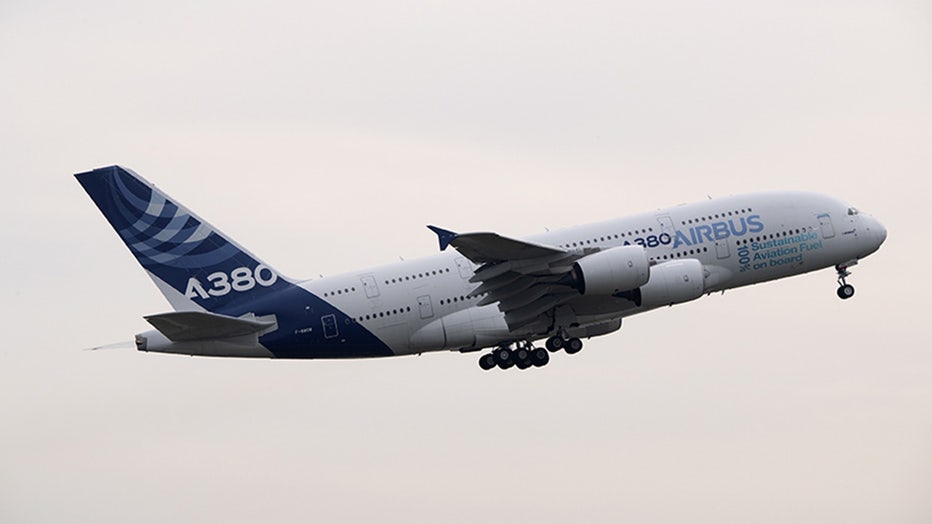 Global aviation emissions account for about 2.1% of all human-made carbon emissions, according to data collected by the Air Transport Action Group (ATAG).

In October 2021, the world’s largest association of airlines said it was aiming for the air transport industry to reach net-zero carbon emissions by 2050, while acknowledging it will be a "huge challenge."

The International Air Transport Association, which has key offices in Geneva, said its general meeting in Boston had agreed on the target, a commitment that would line it up with the goal of the 2015 Paris accords to help keep global warming under 1.5 degrees Celsius.

The industry appears to be counting heavily on a carbon-offset plan laid out by a U.N. organization on civil aviation, but suggests governments have a role to play, too.

"With collective efforts of the entire value chain and supportive government policies, aviation will achieve net-zero emissions by 2050," IATA Director-General Willie Walsh said in a statement.

IATA said industry can take steps through use of sustainable fuels, new plane technologies, improved efficiencies and new power sources like electric or hydrogen power — but carbon capture and carbon-offset programs will also have a role.