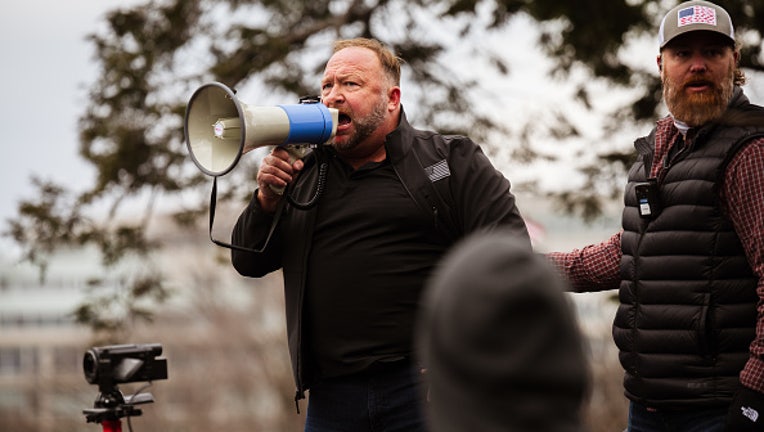 WASHINGTON, DC - JANUARY 06: Alex Jones, the founder of right-wing media group Infowars, addresses a crowd of pro-Trump protesters after they storm the grounds of the Capitol Building on January 6, 2021 in Washington, DC. A pro-Trump mob stormed the

AUSTIN, Texas - Citing health problems, Alex Jones defied a Connecticut judge’s order to show up for a deposition Thursday in a case brought by relatives of victims of the Sandy Hook Elementary School shooting who sued the Infowars host for calling the massacre a hoax.

It was the second straight day Jones did not appear for the scheduled deposition in Austin, Texas, where Jones and Infowars are based. A judge found Jones liable for damages in November, and his testimony is being sought ahead of a trial to determine how much he should pay the families.

In pre-recorded comments broadcast on his show Thursday, Jones said he didn’t appear for the deposition on the advice of doctors and was home tending to his health. He said without disclosing specific health problems that he was under stress and his cardiovascular system was affected by a bout with COVID-19 last year.

Connecticut Judge Barbara Bellis on Wednesday denied a request by Jones’ lawyers to delay the deposition and ordered Jones to appear Thursday. Bellis wrote in a ruling that letters from Jones’ doctors indicate his medical conditions aren’t serious enough to prevent him from attending the deposition. She noted Jones wasn’t hospitalized and appeared on his web show earlier this week.

"Mr. Jones cannot unilaterally decide to continue to engage in his broadcasts, but refuse to participate in a deposition," Bellis wrote.

The judge warned Jones that he would be in contempt of her order if he failed to show Thursday, and said the families’ lawyers could request sanctions against him and try to subpoena him in Texas.

For years, InfoWars peddled claims on its massive online platform that the Sandy Hook Elementary mass shooting was a "hoax."

Twenty first graders and six educators were killed in the 2012 shooting. The families of eight of the victims and an FBI agent who responded to school sued Jones, Infowars and others in Connecticut, saying they have been subjected to harassment and death threats from Jones’ followers because of the hoax conspiracy. Jones has since said he believes the shooting did occur.

A trial on how much Jones should pay families in the Connecticut case is set to begin in August. Jones also was found liable for damages in similar lawsuits filed in Texas by relatives of Sandy Hook victims, and faces trial later this year.

Christopher Mattei, a lawyer for the Sandy Hook families, did not immediately say what the families’ next legal steps were.

"This cowardly attempt by Mr. Jones to escape accountability for the years he spent spreading lies about Sandy Hook, shows contempt both for the law and the families," Mattei said in a statement Thursday. "We will continue to work within the legal system to hold Mr. Jones accountable for his actions."

On his show Thursday, Jones said he will appear for the depositions when he is healthier and continue to fight the lawsuit.

"Quite frankly I was looking forward to these depositions because I was going to chew this Chris Mattei guy out," Jones said. "And then (the doctors) they’re like you’re crazy if you go do your normal 10-, 12-, 14-hour workday. You can’t do it. So I’ve got some more tests coming up, today and tomorrow, and I’m going to get those knocked down and I should be fine."